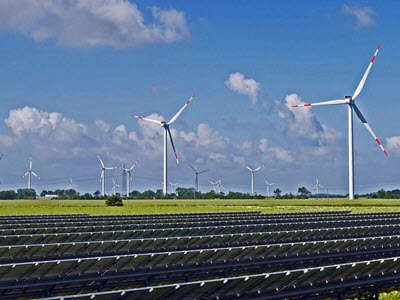 Green Growth as a Catalyst for Transitioning to Clean Energy

The Biden administration has made clear that addressing climate change will be a top priority. In recent years, shifting market conditions have enabled the transition to lower-carbon energy sources and created new opportunities for technological innovation, market growth, and cooperation. How the United States maximizes these opportunities—not only at the national level but also at the state and city levels—will determine the long-term success of both domestic and international policy choices.

This brief highlights three areas for U.S. policymakers to build on past successes: promoting green economic growth, re-engaging and expanding international cooperation, and encouraging innovation to lead future energy transitions. It then concludes by considering policy options for Congress.

The energy transition taking place is already felt in places like Appalachia, where economic shifts and low natural gas prices reduced coal mining jobs by 27% from 2005 to 2015. A growing number of Americans across the country now work in renewable energy jobs. From California to Texas and North Carolina to Michigan, the U.S. economy is beginning to transition to a lower-carbon future.

Electric vehicles, in particular, are key. Nearly one million Americans work in auto manufacturing, and in 2019 foreign direct investment in the industry was over $140 billion. With this economic footprint, it is imperative that the United States prepare its workers for changes in the energy market. Retraining communities vulnerable to displacement will help smooth the transition to cleaner fuel types. With proper investment in human capacity, electrification could reinvigorate the U.S. auto industry. Changing the way the United States moves also has huge implications in the fight against climate change. Given that oil is the leading source of greenhouse gas emissions in the country, limiting the need for it in the transportation sector is a huge component of reducing climate impacts. Adding millions of electric cars, however, will increase the demand for electricity, and investment in charging infrastructure will be critical to jump-starting this nascent technology.

Many U.S. allies and partners are prioritizing climate mitigation and clean energy, with important implications for policymakers in the United States. In 2020, South Korea and Japan announced plans to achieve carbon neutrality by 2050. The European Union has proposed to tax imports to cover their carbon content—a measure that South Korea is also considering. As the United States sets its own priorities, policymakers must consider how cooperation on climate change can have mutually beneficial outcomes.

Indeed, many opportunities already exist for the United States to re-engage with its allies and partners on climate change and green growth. In both the public and private sectors, joint ventures and agreements with Japan and South Korea have been critical for the nuclear energy industry. Nuclear energy provides countries with a significant portion of clean electricity and could benefit from cooperation on advancements in safety and waste reduction. On a larger scale, U.S. contributions to international financing and development mechanisms, such as the Green Climate Fund and Global Environment Facility, play an important role in aiding developing countries in their own energy transitions. These initiatives facilitate technology transfers and investment in critical infrastructure.

Green growth and cooperation must be coupled with green innovation, and the pace of technological change will only quicken as more countries move toward sustainability. The United States must invest in the necessary research and development to stay at the cutting edge. Otherwise, a U.S. economy already reeling from a global pandemic will risk further loss of jobs, and developing Asia will turn to China for the technology needed to achieve climate goals. Programs like the Advanced Research Projects Agency for Energy (ARPA-E) and the Department of Energy’s Office of Energy Efficiency and Renewable Energy can fill this research and technology gap.

One example is battery technology. Beyond revamping the transportation sector, improved energy storage will have profound implications for generating and using electricity. Variable renewables like wind and solar have seen impressive growth, and with improved energy storage their limitations on calm and cloudy days, respectively, can be overcome. Households producing some of their own electricity will also fundamentally change the relationship between citizens, utility companies, and the government. The United States must prepare its electrical grid to deal with these infrastructure needs and changes, while also updating its policies for this new energy economy.

Although this transition brings uncertainty today, the new jobs and skills created through such innovation can become the cornerstone of tomorrow’s market. Investing in research and development now can ease the impact on the economy and simultaneously give U.S. industry an edge on an increasingly competitive global stage.

“A priority should be retraining American workers to ensure that this transition leads to a revitalized economy through legislation like the Workforce Innovation and Opportunity Act. It is also paramount to stay ahead of future disruptions. “

Congress has an opportunity to play a proactive role in the ongoing transition toward clean energy. A priority should be retraining American workers to ensure that this transition leads to a revitalized economy through legislation like the Workforce Innovation and Opportunity Act. It is also paramount to stay ahead of future disruptions. Given that high upfront costs dissuade private investment, public funding is an ideal way to “future-proof” the economy while accelerating the breakthroughs needed to achieve climate goals. By funding U.S. research and development through national laboratories and programs like ARPA-E, as well as identifying new opportunities like President Joe Biden’s proposed ARPA-C (for climate-focused technologies), Congress can ensure that the United States is prepared for the shifts we see today, as well as the disruptions of tomorrow.

Moreover, international cooperation on climate change, whether through enabling joint ventures and trade or completing the U.S. contributions to the Green Climate Fund, should be considered in Trade Promotion Authority legislation and annual budget allocations. This will equip the United States with the domestic and international policies and partnerships to prepare for unforeseen challenges.