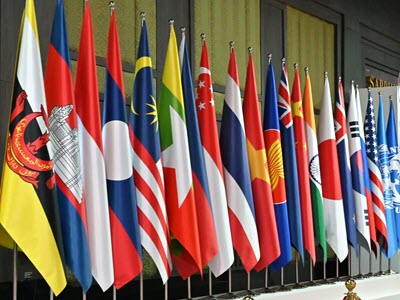 Bolstering U.S. Engagement in the Indo-Pacific

This brief will identify areas for cooperation to manage China’s rise, as well as to address other challenges such as climate change, and consider options for Congress to facilitate these efforts.

Transactional burden-sharing negotiations, rhetoric questioning the utility of alliances, and decisions made without allied consultation have strained U.S. relationships all over the world, including in the Indo-Pacific. The United States will need to repair this damage to its alliances and partnerships in order to successfully respond to one of the greatest external threats to national security today—China.

U.S. competition with China is complex and multifaceted, requiring the assistance of both bilateral alliances and multilateral organizations and coalitions. Moreover, all U.S. allies and partners do not share the same interests and concerns when it comes to China. The United States must recognize that its allies and partners have their own national security and economic interests, join these countries when they are in agreement, and search for common ground for engagement in areas where there is disagreement. This brief will identify areas for cooperation to manage China’s rise, as well as to address other challenges such as climate change, and consider options for Congress to facilitate these efforts.

Taiwan is a strong U.S. economic partner and will continue to be an important actor as U.S. and international companies seek to diversify their supply chains and move away from China. Taiwan has made it clear that it welcomes an increased role in global supply chains for next-generation technologies. In addition to developing its advanced technology industries, Taiwan has proved that it can be a leader in global health, efforts to counter disinformation, and digital governance. The United States and the rest of the world can learn from Taiwan in these areas.

Congress plays a vital role in shaping U.S.-Taiwan relations and can continue to support Taiwan’s vibrant democracy by passing additional legislation to strengthen bilateral ties and advocating for Taiwan’s inclusion in more multilateral organizations and coalitions.

In addition to bilateral alliances and partnerships, multilateral relationships play a key role in maintaining stability in the Indo-Pacific. Chief among these is the United States’ trilateral relationship with Japan and South Korea, which has been complicated by historical tensions between those countries and tense burden-sharing agreements between the United States and South Korea. To maintain balance in Northeast Asia and prevent escalation from North Korea, the United States should re-emphasize its commitment to South Korea and Japan. Negotiations with Japan to renew the agreement on the cost of hosting U.S. troops, which is set to expire on March 31, present an opportunity for the Biden administration to reaffirm its commitment to allies and partners as well as show Japan that the alliance is more than a transaction. Congress can reinforce these efforts by continuing to pass resolutions aimed at strengthening the trilateral relationship.

Multilateral organizations such as the Association of Southeast Asian Nations (ASEAN) also play a key role in the Indo-Pacific. While many Southeast Asian countries are frustrated by China’s expansion in the South China Sea and encroachment on their exclusive economic zones, which is an issue for potential cooperation, the United States must also realize that the ASEAN countries have other priorities. Trade and infrastructure development, as well as cultural exchanges and people-to-people ties, are additional areas in which the United States can seek to engage ASEAN. Congress can work to re-energize the House of Representatives ASEAN Caucus by issuing more resolutions aimed at strengthening relations. The caucus could reiterate its previous call for an ambassador to ASEAN, encourage the executive branch to send high-ranking officials to ASEAN meetings, and continue to engage directly with diplomats from Southeast Asia.

Strengthening the aforementioned alliances and partnerships and ties to multilateral organizations will help the United States build, per Kurt Campbell and Rush Doshi, new issue-based coalitions of like-minded countries. Economic coercion by China is one issue around which the United States could form a coalition. Many countries in the Indo-Pacific, including Japan, South Korea, and Australia, are concerned by China’s use of economically coercive tactics against those that question its preferred narrative or challenge its stated interests. For example, after Australia called for an inquiry into the origins of the novel coronavirus, banned 5G equipment from Huawei, and criticized China’s actions in Hong Kong, China retaliated with a 200% tariff on Australian wine and restrictions on Australian barley, wheat, and beef imports. Given that China is Australia’s largest export market, these restrictions could be devastating for the Australian economy. By leveraging its relationships to close allies and partners, the United States can build support and legitimacy for issue-based coalitions with like-minded countries to address such challenges.

U.S. alliances and partnerships in the Indo-Pacific are valuable not only for managing competition with China but also for effectively responding to other challenges the United States and the world currently face, such as global health and climate change. Working together with like-minded countries to combat shared challenges allows for more innovative, cooperative, and equitable solutions.

“Congressional leaders could form new caucuses or working groups that focus on international cooperation with allies, partners, and like-minded countries on issues such as maritime security in the Indo-Pacific or economic coercion.”

Given the range and complexity of the challenges facing the United States, engaging allies, partners, and like-minded countries should be a priority for the new Congress. There are several ways Congress can support cooperation as well as encourage new forms of engagement.

Second, Congress could ask the Departments of Defense and State to provide regular updates on their efforts to strengthen alliances and partnerships. In addition, Congress should consider increasing funding for the Department of State to conduct additional programming to engage allies, partners, and like-minded countries, such as cultural exchanges.

Finally, Congress should continue to pass resolutions and legislation aimed at strengthening existing relationships with partners and treaty allies. In particular, it should engage with the Inter-Parliamentary Alliance on China, which aims to bring together legislators from all over the world to form an effective democratic response to the challenges posed by China’s rise.

Rachel Bernstein is a Project Manager with the Political and Security Affairs group at NBR. The views expressed are those of the author.