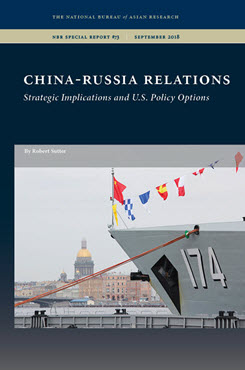 This report provides an overview of the scope and implications of China-Russia relations, explains why Sino-Russian cooperation against U.S. interests has increased during the past decade, assesses key determinants, and examines U.S. policy options.

The China-Russia relationship continues to deepen and broaden with ever more negative implications for the U.S. The drivers of Sino-Russian cooperation overshadow the brakes on forward movement at the U.S. expense. The momentum is based on (1) common objectives and values, (2) perceived Russian and Chinese vulnerabilities in the face of U.S. and Western pressures, and (3) perceived opportunities for the two powers to expand their influence at the expense of U.S. and allied countries that are seen as in decline. The current outlook is bleak, offering no easy fixes for the U.S. Nonetheless, there remain limits on Sino-Russian cooperation. The two governments continue to avoid entering a formal alliance or taking substantial risks in support of one another in areas where their interests do not overlap. Longer-term vulnerabilities include Russia’s dissatisfaction with its increasing junior status relative to China, China’s much stronger interest than Russia in preserving the existing world order, and opposition to Russian and Chinese regional expansion on the part of important lesser powers in Europe and Asia seeking U.S. support.