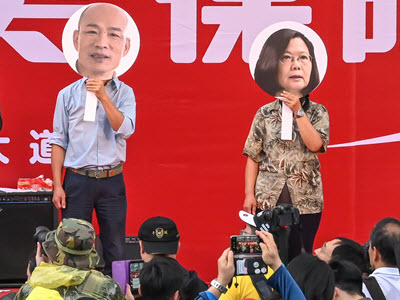 Taiwan’s presidential election in January 2020 will be between President Tsai Ing-wen of the Democratic Progressive Party (DPP) and Han Kuo-yu of the Kuomintang (KMT). From cross-strait relations to the U.S.-China trade war, the election not only will have domestic implications but also could have a great impact on the security and politics of the region.

Owen Nguyen spoke with Kharis Templeman, a fellow with the National Asia Research Program (NARP), about the current state of Taiwan’s presidential election, including what issues voters are most concerned about, how the Hong Kong protests might affect the polls, and whether a third-party or independent candidate could be a factor.

What are the current dynamics in Taiwan’s domestic politics, and what issues are the Taiwanese people most concerned about?

The first major issue is Taiwan’s relationship with the People’s Republic of China (PRC). Every party leader and candidate is expected to articulate a certain vision for what they think the cross-strait relationship should be, and their answers shape how people vote. There is a segment of the electorate that is in favor of a more pro-Taiwanese independence position, and there is a different segment that is friendlier to China. The two major political parties in Taiwan, the DPP and the KMT, have always positioned themselves at different spots along the spectrum of answers to that China question.

Taiwan’s economy is not doing too badly right now; it has registered three consecutive years of positive economic growth at an annual rate of 1.5%–2.5%. Compared with the other major economies in the East and Southeast Asia regions, that is pretty good in the current context, both because China’s economy has slowed down and because of the U.S.-China trade war. For instance, Taiwan’s annual GDP growth has been higher than South Korea’s for all but one of the last eight quarters.

Ever since President Tsai Ing-wen took office, the PRC has taken a hard-line approach toward her and her administration. In Taiwan, she has also been criticized from both sides of the political spectrum. There are some in the DPP who think she is too moderate on cross-strait relations and are disappointed that she has not moved more forcefully and openly toward a pro-independence position. The KMT, on the other hand, has blamed her for the worsening of cross-strait relations.

How will these issues affect the upcoming presidential election?

In the current environment, I think President Tsai should be considered the favorite. That’s actually quite a change from where things were six months ago. In the local elections in 2018, the KMT won pretty convincingly and created expectations that President Tsai would struggle to win re-election. However, in the last six months, she has gone from an underdog to a clear favorite, and that’s for a couple of reasons. First, she was able to fend off an intra-party challenge from the popular former premier William Lai in the DPP primary in June. Second, the Hong Kong protests and Beijing’s handling of cross-strait relations have helped Tsai’s image and positioning.

Currently, there are only two prominent, declared candidates: President Tsai of the DPP and Kaohsiung mayor Han Kuo-yu of the KMT. The polls have moved around a lot in the last six months. But now that both major parties have selected their nominees, Tsai is leading Han by anywhere from 5% to 15% in head-to-head polls. That gap has widened considerably in the last few weeks.

There was a lot of speculation that one or more major third-party candidates would run. The most prominent is current Taipei mayor Ko Wen-je. He’s an independent and has repeatedly indicated interest in running for president, but in the end he chose not to register by the September deadline.

The other possible independent candidate is businessman Terry Gou. He ran in and lost the KMT primary, but then refused to endorse Han. Gou talked about running a third-party campaign together with Ko Wen-je, but also eventually declined because he could not get Ko to commit to running as his vice-presidential candidate. Now the only way for him to get on the ballot is to run as the candidate of the small People First Party, which looks unlikely.

How is increasing competition between the United States and China, including the current trade war, affecting cross-strait relations and Taiwan’s domestic politics?

The effect of the trade war is complicated. Generally speaking, when the United States and China are not getting along, Taiwan’s interests are hurt more than helped. So it is not necessarily a good thing for Taiwan that the Trump administration has imposed tariffs on Chinese exports and has a tense relationship with China. The goal of the Trump administration is not only to improve U.S. economic bargaining power but also to reorient the entire trading regime of the Asia-Pacific and ultimately shift manufacturing and production out of China to other parts of the region.

The tariffs have had some impact on the manufacturing chains that produce goods eventually shipped to the United States. Many of those manufacturers are Taiwanese companies, and some have been moving production back to Taiwan from mainland China, or to Southeast Asia. Even though some Taiwanese companies have been hurt by the tariffs on the products they produce in the PRC, the trade war has had a mixed impact on the whole for Taiwan. The long-term effects are still unclear, but its economy has so far been resilient despite the trade war.

Do you think the PRC has been successful in persuading the Taiwanese people that it is in their interest to align with the PRC?

The Taiwanese public does not support any form of unification with the PRC. Support for outright unification has always been below 10%, and it is now in the low single digits. Beijing has consistently failed to convince the Taiwanese people that aligning with the PRC is in their best interests.

Now, due to the instability in Hong Kong, it has become even harder to make the case for unification under a “one country, two systems” model. Beijing’s promises do not look credible to most Taiwanese. Even the most pro-China candidate, Han Kuo-yu, has said, “We will never accept one country, two systems, unless it’s over my dead body.” So the PRC is no closer to achieving peaceful unification with Taiwan now than it was 25 years ago.

Given the reports of the PRC’s interference in the 2018 midterm elections, are there concerns that Beijing might affect the outcome of the 2020 election?

The PRC tries to interfere with every election in Taiwan. In 1996, for instance, the People’s Liberation Army held exercises as a way to intimidate voters into not voting for Lee Teng-hui. That strategy backfired, and Lee actually won a larger victory than most polls predicted he would.

However, there is evidence of interference in the 2018 elections that suggests a more sophisticated campaign, one that could be more problematic for Taiwan’s democracy. The campaign was covert rather than being conducted through open statements of support for a candidate or attempts at military intimidation. Instead, PRC-linked actors tried to hide their influence operations, whether through the donation of money to pro-China candidates, the manipulation of social media, or control over major newspapers. There’s clear and convincing evidence that the CCP has engaged in all these actions over the last couple of years.

It is much harder to estimate how effective these tactics have been. The prominence that Han Kuo-yu achieved in the 2018 election campaign, the speed with which he became a household name, and the overwhelming media attention he received were all a bit unusual. CCP influence operations may have helped him and the KMT to some degree. But even without Chinese help, the KMT probably would have done very well, so we are talking about a marginal effect.

The big worry ahead of the 2020 election is that the PRC will attempt to do the same thing as in 2018 but with many more resources. There may be a much more widespread campaign on social media to try to discredit some candidates and help others. If this campaign is covert, uses money that corrupts the political system, or coerces key people to publicly favor Beijing’s policies and candidates, then it is quite worrisome.

Given China’s history of interference in Taiwan’s elections, I tend to be optimistic that Taiwanese voters—as a whole—are by now pretty skeptical of pro-CCP voices and so are less susceptible to influence operations. But we still should be alert to the possibility that Taiwan’s democracy could be corrupted by a systematic campaign. The best way in the long run to deal with this threat is for Taiwan to strengthen its own democratic institutions, especially public campaign finance, transparency requirements, media ethics, and judicial oversight.

What is your prediction for the upcoming election?

The election results will depend fundamentally on two factors. One is Taiwan’s relationship with the PRC, particularly given the events in Hong Kong. If protests there continue to generate headlines, then that raises the salience of sovereignty and security issues, which benefits Tsai and the DPP—so I think right now she is favored to win the election. The other factor is the economy. If it suddenly tanks, then the race will be much harder for Tsai. Either Tsai or Han could still win, but it will depend to a large degree on events outside their control—and so far the conditions point to a Tsai victory.

Kharis Templeman is the Project Manager of the Taiwan Democracy and Security Project and a Social Science Research Scholar at the Walter H. Shorenstein Asia-Pacific Research Center at Stanford University. He is also a 2019 National Asia Research Program (NARP) Fellow.

This interview was conducted by Owen Nguyen while a Political and Security Affairs Intern at NBR.