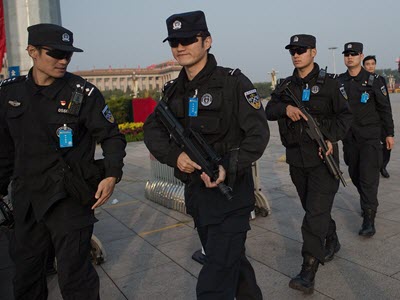 China is facing a rising tide of conflict between the nation’s police officers and the public. While protest events receive considerable media attention, lower-profile conflicts between police officers and residents also make their way onto the internet, shaping perceptions of the police. The ubiquity of live events streamed on the internet helps illuminate the nature of state-society conflict in China and the challenges faced by local law enforcement.

Simone McGuinness spoke with Suzanne Scoggins, a fellow with the National Asia Research Program (NARP), about the reports of rising police-society conflict in China. Dr. Scoggins discusses how the Chinese Communist Party has responded to the upsurge, what channels Chinese citizens are utilizing to express their concerns, and what the implications are for the rest of the world.

What is the current state of police-society relations in China?

Reports of police violence have been on the rise, although this does not necessarily mean that violence is increasing. It does, however, mean that the media is more willing to report violence and that more incidents of violence are appearing on social media.

What we can now study is the nature of that violence—some are big events such as riots or attacks against the police, but there are also smaller events. For example, we see reports of passengers on trains who get into arguments with transit police. They may fight because one of the passengers is not in the right seat or is carrying something prohibited. Rather than complying with the officer, the passenger ends up getting into some sort of violent altercation. This kind of violence is typically being captured by cellphone cameras, and sometimes it makes the news.

The nature of the conflict matters. If somebody is on a train and sitting in a seat that they did not pay for, then it is usually obvious to the people reading about or watching the incident that the civilian is at fault. But if it is chengguan (city administration) telling an elderly woman to stop selling her food on the street and the chengguan becomes violent, then public perceptions may be very different. It is that second type of violence that can be threatening to the state. The public’s response to the type of conflict can vary considerably.

What are the implications for China as a whole?

Regarding what this means for China, it’s not good for the regime to sustain this kind of conflict between street-level officers or state agents and the public. It lowers people’s trust in the agents of the government, and people may assume that the police cannot enforce public security. There are many state agents who might be involved in a conflict, such as the chengguan, the xiejing (auxiliary officer), or the official police. The type of agent almost doesn’t matter because the uniforms often look similar.

When information goes up online of state agents behaving poorly, it makes the state a little more vulnerable. Even people who were not at the event might see it on social media or in the news and think, “Oh, this is happening in my community, or in my province, or across the nation.” This violates public expectations about how the police or other state agents should act. People should be able to trust the police and go to them when they have problems.

How has the Chinese government responded to the increase in reporting violence?

There is a twofold approach. The first is through censorship. When negative videos go up online or when the media reports an incident, the government will go in and take it down. We see this over time. Even while collecting my research, some of the videos that were initially available online are no longer accessible simply because they have been censored. The government is removing many different types of content, not only violence. Censors are also interested in removing any sort of misinformation that might spread on social media.

If step one is to take the video or report down, step two is to counteract any negative opinion by using police propaganda. This is also referred to as “public relations,” and the goal is to present a better image of the police. Recently, the Ministry of Public Security put a lot of money and resources into their social media presence. Many police stations have a social media account on WeChat or Weibo and aim to present a more positive, friendly image of the police. The ministry also teamed up with CCTV to produce television content. This has been going on for some time, but recently shows have become more sophisticated.

There is one program, for example, called Police Training Camp. It is a reality show where police officers are challenged with various tasks, and the production is very glossy. The ministry also produces other sorts of specials featuring police who are out in the field helping people. It shows the police officers working really long shifts, interacting positively with the public, and really making a difference in people’s lives. In this way, the government is counteracting negative opinions about police violence or misconduct.

Do you know of any effective avenues that Chinese people have to address their concerns? Which avenues are becoming more popular?

In general, I will say that it is difficult for people in any society to get justice with police officers because of the way legal systems are structured and the power police hold in local government politics. In China, one of the things people are doing beyond reaching out to local governments or pursuing mediation is calling an official hotline.

This is a direct channel to the Ministry of Public Security, and all these calls are reviewed. There is not a whole lot that citizens can do about specific corruption claims. But if somebody has a particular goal, then the hotline is slightly more effective because it allows citizens to alert the ministry. However, many people do not know about the hotline, so the ministry is trying to increase awareness and also help staff the call center so that it can more effectively field calls.

As for how much relief people feel when they use these channels, this depends on what their goal is. If the goal is to get somebody fired, then the hotline may not work. But if someone is looking to air their grievances, then it may be helpful.

What are the implications of increased police-society conflict in China for the rest of the world? What can the United States or other countries do to improve the situation?

These are really sticky issues that are difficult to solve. When discussing police-society conflict, it is important to step back and think about who the police are—the enforcement agents of the state. So by their very nature, there will be conflict between police and society, and that is true in every country. In China, it really depends on where and what type of police climate we are talking about.

Xinjiang, for instance, has a very different police climate than other regions in China. There is a different type of policing and police presence. Chinese leaders certainly do not want any international intervention in Xinjiang. They see this as an internal issue. While some governments in Europe and the United States might want to intervene, that is going to be a nonstarter for China.

As for police problems more generally, I would say that if China is able to reduce some of the police-society conflict in other areas of the country, then this is good for the international community because it leads to a more stable government. We also know that there is a fair amount of international cooperation between police groups. China has police liaisons that travel and learn about practices and technology in different countries. The police in these groups attend conferences and take delegates abroad.

There are also police delegations from other nations that go to China to learn about and exchange best practices. But that work will not necessarily address the underlying issues that we see in a lot of the stations scattered throughout China outside the big cities like Beijing or Shanghai. Those are the areas with insufficient training or manpower. Those issues must be addressed internally by the Ministry of Public Security.

How is the Chinese government improving its policing capabilities?

Recently, the ministry has tried to overcome manpower and other ground-level policing problems by using surveillance cameras and artificial intelligence. Networks of cameras are appearing all over the country, and police are using body cameras for recording interactions with the public. This type of surveillance is not just in large cities but also in smaller ones. Of course, it is not enough to just put the cameras up—you also need to train officers to use that technology properly. This process takes time, but it is one way that the ministry hopes to overcome on-the-ground problems such as the low number of police per capita.

How might the Hong Kong protests influence or change policing tactics in China?

The situation in Hong Kong is unlikely to change policing tactics in China, which are generally more aggressive in controlling protests than most of what we have seen thus far in Hong Kong. It is more likely that things will go in the other direction, with mainland tactics being used in Hong Kong, especially if we continue to observe increased pressure to bring the protestors in check.

This interview was conducted by Simone McGuinness, the Public Affairs Intern at NBR.