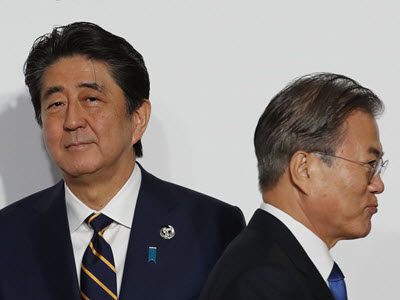 Out of Tune: Japan-ROK Tension and U.S. Interests in Northeast Asia

This brief explains the current state of the U.S.–Japan–South Korea trilateral relationship, why the relationship is the most important trilateral in the world, and how it came to be in such a state of disrepair. Finally, the brief offers suggestions on how Washington can shore up the relationship.

At present, the U.S.-led trilateral alliance network with Japan and South Korea (the Republic of Korea, or ROK) is badly out of tune. A mix of the following three issues is causing disruption:

These three distinct themes—history, economic and trade links, and security cooperation—are deeply interwoven. When well-balanced, they define a positive triangle of relations between the United States, South Korea, and Japan, with leaderships that are attentive to each other, even as the countries have different interests. Today, however, ROK president Moon Jae-in and Japanese prime minister Shinzo Abe are responding more to their domestic audiences than to global ones, and U.S. president Donald Trump is neglecting the U.S. role in the trilateral altogether.

WHY TRILATERALISM MATTERS FOR THE UNITED STATES

First, the rise of China as a global economic power with significant power projection throughout its near abroad challenges the dominant position the United States has long enjoyed in East Asia. The United States cannot manage the many dimensions of China’s rise alone; alliances are vital if the United States is to prevent the emergence of a “peer competitor” in the Indo-Pacific. Even President Trump has  acknowledged  that  his  “America  first” approach does not mean “America alone.” Washington must rely upon allies with common interests and shared values to keep the peace and sustain the existing economic order.

Second, the DPRK, in defiance of numerous United Nations Security Council Resolutions, continues to build nuclear weapons and perfect the means to deliver them. Thirteen years after it first detonated a nuclear bomb and twenty-five years since it signed the 1994 Agreed Framework, North Korea clings stubbornly to its nuclear ambitions. Successfully convincing Pyongyang to change course will require a multinational effort—one that addresses its key security concerns as well as those of the United States, China, Russia, and Japan, even as it lays a foundation for peace and reconciliation between the two Koreas. To secure such an  outcome acceptable to the United States, close U.S. coordination with the ROK and Japan is essential. Absent this trilateral policy synchronization, the final outcome of peace and denuclearization talks will likely favor the DPRK, China, and Russia, at the expense of the United States and its allies.

Finally, the United States confronts myriad transnational challenges in the Indo-Pacific. The network comprising the U.S.-Japan-ROK trilateral alliance, first built by the United States to contain the Soviet Union, now spans the entire range of human endeavor: from protecting the freedom of navigation to preserving the peaceful use of space for all humankind; from promoting trade and investment to advancing good governance. Its strength derives not only from the existence  of  common  threats  but also from shared values, including respect for human rights. Uniting the resources and efforts of the United States, Japan, and the ROK has proven an effective formula for promoting creative solutions to tough problems. The network relies on the aggregated resources of its members but even more importantly it depends on the synergies created when they work in concert. Working in harmony is a force multiplier. Discord between the partners leaves the network weaker than the sum of its parts.

South Korea and Japan have every reason to resolve their differences. Even now, with relations badly strained, lawmakers from both countries have expressed hope that the two nations might practice truth and reconciliation on history issues, seek mutual economic benefit, and integrate their security and intelligence establishments. The only nations that profit from tension between the ROK and Japan are actual or potential adversaries.

But for mainly domestic reasons, neither President Moon nor Prime Minister Abe and their respective governments have been able to find a way forward. Both sides blame the other for starting the tension, and attempting to assign responsibility is a hopeless task, as every perceived provocation—visits to the Yasukuni Shrine, textbook controversies, comfort women memorials, Tokdo/Takeshima island visits, radar locks, map names, court cases, affronts to the honor of the emperor,  etc.—all have an antecedent  if one goes back far enough. The current discord has been exacerbated by President Moon’s progressive government, which is eager to dismantle, or at least revisit, the policies of its conservative predecessor, including the November 2015 agreement (arranged by President Obama) to resolve the comfort women issue once and for all. Relations have also been complicated  by  Prime  Minister  Abe’s  reliance  on a nationalist political base and  efforts  to  remove the constraints of Japan’s peace constitution, thus restoring Japan to a position of “normalcy” in the international community. The Japanese public is also suffering from “Korea fatigue,” and Prime Minister Abe cannot expect any political reward at home for accommodating South Korean concerns.

The domestic audiences and power bases for Moon and Abe seem mostly pleased by the tough rhetoric emanating from the Blue House and Kantei. According to 2018 Pew survey data,  more  than  60% of South Koreans have an “unfavorable” view  of Japan—in stark contrast to the overwhelmingly favorable ratings Japan enjoys elsewhere in East Asia.[1] And after years of gradually warming ROK-Japan relations, opinions of South Korea in Japan have  also soured in recent months. Only 20% of Japanese reported having a “favorable” view of the ROK in a poll from last June—a record low.[2]

A POSSIBLE WAY FORWARD FOR THE U.S. ROLE

Untangling the issues at the core of the current crisis in ROK-Japan relations requires a comprehensive approach. As much as Seoul and Tokyo might prefer to handle their historical, economic, and security issues independently, progress is unlikely without the restoration of an essential ingredient to cooperation: trust. With mutual confidence so badly damaged,  the intervention of a third party—the United States—is imperative if the two estranged neighbors are to restore harmony. Traditionally, both the ROK and Japan have trusted the United States more than they have trusted each other. That confidence has allowed them to work together in ways that would not otherwise have been possible. Whether that trust in the United States remains sufficient at present to allow Seoul and Tokyo  to  bridge  their  differences is an open question, but there is no doubt that the United States must try.

For most of its first two years in office, the Trump administration took a hands off approach to rising tensions between the ROK and Japan. It may have hoped that Japan and South Korea would find  a  way out of the escalation of tension, and it may have also understood, correctly, that intervening could compromise Washington’s ability to remain neutral on the sensitive historical and territorial issues. In hindsight, however, Trump’s aloof posture was a mistake. While Washington cannot impose solutions, it can, as President Obama proved in November 2015, bring the two allies together, remind them of the United States’ interest that they get along, and facilitate dialogue.

With the confirmation of Assistant Secretary of State for Indo-Pacific Affairs David Stilwell in the summer of 2019, the State Department began to take a more active role in the dispute through shuttle diplomacy, but by that time relations were already dangerously compromised. As many U.S. experts have noted, the relationship cannot at this juncture be repaired at the assistant secretary level.[3] Only a summit meeting orchestrated by President Trump could provide sufficient political cover for President Moon and Prime Minister Abe to change course, and that seems increasingly unlikely in the current environment.

Working level meetings facilitated by the United States could result in some progress. Two of the issues needing adjustment are essentially technical  in nature—export controls and intelligence sharing. These challenges could be resolved if the parties were able to muster sufficient political will, with working level officials arranging face-saving gestures sufficient to allow both the ROK and Japanese administrations to declare that their concerns had been addressed. Specifically, the ROK could announce some minor adjustments to its export controls processes to ensure strict compliance with UN sanctions on the DPRK (ostensibly the reason for Japan’s delisting). Once Japan restored the ROK to its “white list,” South Korea could do the same (as its delisting of Japan was clearly retaliatory). Large firms in both nations would applaud the resumption of streamlined trading procedures, as the current restrictions only serve to depress economic performance in both countries.

As for the security relationship,  the  recent DPRK submarine-launched ballistic missile test provides an excuse for the United States to convene an emergency  working  group  and  underscore   the importance of effective coordination and intelligence sharing. This is a moment for high-level U.S. intervention on behalf of Washington’s own vital national security interests. GSOMIA allowed for more seamless intelligence sharing regarding North Korean activities, and once terminated, it will be hard to reconstitute. The face-saving move   is  for  the  ROK  to  suspend,  rather  than cancel, its withdrawal from GSOMIA. President Moon could address any domestic unhappiness with such a retreat by blaming it on the imperative of staying  close to Washington as talks with North Korea reach a vital stage.

The third issue—history—cannot so easily be re-tuned, nor can it reliably be muted. The only way for Japan and Korea to resolve the history question is to move beyond it—building new relations and areas of cooperation that gradually reduce the prominence of legacy grievances. If the current difficulties are allowed to persist, an entire generation of young Koreans and Japanese will grow up with sour view of each other, a generational taint that could have lasting tragic consequences. Geography dictates that Japan and South Korea must forge closer ties if they are to sustain their sovereignty in the face of their large and nuclear-armed neighbors.

The Role of Congress

Congress has been more attentive to the growing crisis than the White House, and has expressed bipartisan support for the importance and vitality of the U.S. trilateral relationship with Japan and South Korea. The House passed House Resolution 127 and the Senate passed Senate Resolution 67, both of which affirm the need for trilateral cooperation in the pursuit of shared interests. As chairman of the House Foreign Affairs Committee Eliot Engel said in connection with the House Resolution, “When Washington, Tokyo,  and  Seoul  work   together   in   partnership, it strengthens security for all three countries, the Asia-Pacific region, and the world.” Ranking member of House Foreign Affairs Committee Michael McCaul similarly said, “Our longstanding shared [trilateral] relationship is essential to ensuring regional stability in the Indo-Pacific, and was a key component in making possible the current diplomatic opening with North Korea.” And in the Senate, Cory Gardner, chairman of the Subcommittee on East Asia, the Pacific, and International Cybersecurity Policy, noted, “The relationship between the United States, the Republic of Korea, and Japan forms the cornerstone of peace and stability in the Indo-Pacific region.”[4]

Congress could do even more to minimize the damage to U.S. interests caused by the ROK-Japan rift.

Frank Jannuzi is President and Chief Executive Officer of the Mansfield Foundation. He previously served
as Deputy Executive Director (Advocacy, Policy and Research) at Amnesty International, USA. From 1997 to 2012, Mr. Jannuzi was Policy Director, East Asian and Pacific Affairs, for the U.S. Senate Foreign Relations Committee, where he advised committee chairmen Joseph Biden and John Kerry. He has also served as an analyst in the U.S. Department of State’s Bureau of Intelligence and Research.

This brief was made possible with the generous support of the Korea Foundation.

The Case for U.S.-ROK-Japan Trilateralism: Strengths and Limitations

The Benefits, Challenges, and Necessity of Triangular Diplomacy: A Case for Enhanced U.S.-ROK-Japan Cooperation