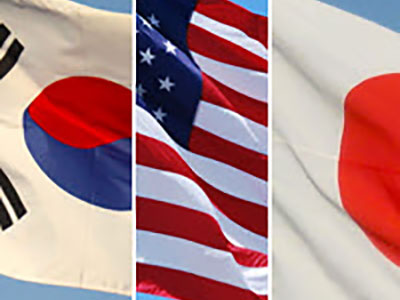 The Benefits, Challenges, and Necessity of Triangular Diplomacy
A Case for Enhanced U.S.-ROK-Japan Cooperation

The findings and analysis in this essay are based on a three-year project on U.S.-ROK-Japan trilateralism organized by the National Bureau of Asian Research, which will publish a full-length report in spring 2018.

In early 2016, the trilateral relationship between the United States, the Republic of Korea (ROK), and Japan seemed to be approaching a golden period of cooperation. Progress on sensitive issues such as Japan’s wartime history in Korea, missile defense cooperation, and an intelligence-sharing agreement offered room for cautious optimism. Now South Korea and Japan confront renewed disagreement on “comfort women” reparations; Beijing’s pressure on Seoul has complicated the U.S. deployment of the Terminal High Altitude Area Defense (THAAD) system in South Korea; and lingering mistrust and mounting public pressure have cast doubt upon the future of the agreement that South Korea and Japan signed in 2016 to share limited military information. Even with agreements in place, implementation remains a principal challenge. Against this backdrop, it is increasingly crucial that we re-examine the trilateral partnership and forge a functional security strategy to ensure that the golden period of trilateral cooperation with our treaty allies continues.

States engage in a trilateral relationship when they all seek to protect at least one of three shared interests: national security, economic prosperity, and values and norms. Trilateral cooperation allows members to construct comprehensive plans for military contingencies. Activities like military exercises and intelligence gathering may be difficult or costly for any one nation to undertake on its own or with only one partner; coordination between three partners generates strength in numbers, resources, and geographic scope—ultimately enhancing long-term cost-effectiveness and preparedness. Further, trilateralism inherently requires internal collaboration and engagement among all three countries. If two members struggle with bilateral tensions, the trilateral arrangement allows the countries nonetheless to work together. Trilateral members can also benefit economically and promote common values and norms through nontraditional security measures.

Benefits and Challenges of U.S-ROK-Japan Trilateralism

The formal U.S.-ROK-Japan trilateral structure was first established in response to North Korea’s withdrawal from the Nuclear Nonproliferation Treaty in 1993. The United States, the ROK, and Japan formed the Trilateral Coordination and Oversight Group, coordinated joint military exercises, and began holding frequent trilateral meetings. As Pyongyang continues its pursuit of nuclear weapons in an increasingly complex security environment, North Korea remains the single-largest unifying factor for the trilateral partnership and has made cooperation an unquestionable necessity. In this context, a trilateral relationship between the United States, the ROK, and Japan highlights the benefits and associated challenges in triangular diplomacy:

First, trilateral cooperation promotes broader Asian regionalism among three democracies with indispensable, interdependent market economies. Serving as a subregional anchor economically affords the three countries additional opportunities to collaborate as natural partners in promoting democratic values like human rights and freedom. However, some stakeholders and observers in the region perceive a U.S.-led regional alliance as an attempt to contain China; others advocate for a China-led regional alliance to counter U.S. influence. This perception can lead to half-hearted participation in the partnership and limits the scale, scope, and efficacy of any gains. Trilateralism presents the United States, the ROK, and Japan an avenue to overcome geopolitical concerns and assumptions about the rationale for trilateralism to instead demonstrate that their partnership favorably improves individual members’ economies and increases prosperity in the region.

Second, trilateral cooperation strengthens each member state’s security vis-à-vis North Korea. However, even against a unifying and apocalyptic nuclear threat, a dysfunctional dyad within the trilateral arrangement will increase the cost of three-way coordination and jeopardize cooperation in the long run. All three nations, but especially South Korea and Japan, wrestle with deep-seated animosity rooted in history. For example, the legacy of Japan’s actions as a colonial power in Korea, particularly the use of Korean women as sex slaves (euphemistically known as “comfort women”) for the Japanese military during World War II, has left strong feelings of distrust that continue to this day despite a 2015 agreement to finally resolve the issue. Nevertheless, the trilateral partnership compels the three countries to prioritize concerns about North Korea by offering a framework to marshal resources and intelligence. If members successfully temper temptations to abandon the trilateral arrangement to rely on two separate bilateral alliances, they can maximize benefits from their increased military personnel, skills, and resources across a larger geography. Doing so will develop heightened readiness to effectively address a North Korean security threat in the future.

Third, trilateral cooperation provides opportunities to advance nontraditional security measures in humanitarian assistance and disaster relief (HADR), energy, space, and cybersecurity. Having made significant strides in these arenas as individual actors, the United States, the ROK, and Japan can promote stability by joining efforts to share and implement key insights. Yet, the three countries must each overcome a perceived lack of immediacy and differences in prioritization. For instance, they have all recently endured cyberattacks targeting critical infrastructure and defense-related industries, albeit by different antagonists. The trilateral partnership offers a platform for identifying common weaknesses, complementary strengths, and aligned nontraditional security goals. By utilizing this platform, the trilateral can establish clear organizing principles in each emerging domain and sufficiently combine intelligence and training for maximally beneficial results. The upcoming Winter Olympics in Pyeongchang in February this year, where North and South Korea will march their athletes together under one flag at the opening ceremony, and the Summer Olympics in Tokyo in 2020 provide such opportunities to collaborate.

Finally, the partnership offers the United States an opportunity to cement not only its dedication to nuclear deterrence but also its commitment to protect its allies. South Korea and Japan should be encouraged by this. By actively pursuing and engaging in trilateral cooperation, the United States can credibly assure both South Korea and Japan that the two countries need not reconsider developing a nuclear capability on their own, and thereby prevent nuclear proliferation.

Recommendations for the United States

In order to fully realize the aforementioned benefits, the United States and its allies must address and overcome their related challenges. Based on our findings, we offer the following recommendations:

To strengthen security vis-à-vis North Korea, the United States, the ROK, and Japan should prioritize military coordination. The three countries should continue to carry out trilateral training exercises in naval ballistic missile defense, especially involving critical Aegis ship-based systems, as has been done in the last several years. To do so, the United States and the ROK must avoid the temptation to discard established military coordination mechanisms solely because they were developed by previous administrations. Rather, the United States should play an especially active role in encouraging communication and cooperation among the three countries, even on sensitive issues between South Korea and Japan. Additionally, the United States should encourage South Korea to fully implement the THAAD system to increase missile defense capabilities in the region.

To improve nontraditional security, trilateral members should participate in combined HADR and peacekeeping activities, explore ways to improve regional energy security, and collaborate on cybersecurity and space. Combined multilateral disaster relief training between the United States, the ROK, and Japan would provide coordinated deployment experiences for application in a contingency situation on the Korean Peninsula. Joint government incentive plans for a regional natural gas trading hub would increase energy security in the region, while the United States could lead efforts to streamline rules on liquefied natural gas (LNG) exports with its allies. In addition to building more official energy trading networks, the United States can invite its partners to participate in regular cybersecurity defense exercises conducted by U.S. Cyber Command. Last, U.S.-ROK-Japan information sharing regarding space data, such as tracking space debris and retrieval of launched objects, would improve overall space situational awareness.

To promote broader Asian regionalism and democratic values, members should publicly emphasize the importance of trilateral security cooperation to gain popular approval within each nation. As leading world powers, the United States, the ROK, and Japan similarly possess the strength and opportunities to exemplify and preserve democratic government and its intrinsic values in Asia. First, however, they must demonstrate a credible and purposeful commitment to each other in the eyes of the international community. To be convincing, the United States should repeatedly and openly reject misperceived and unproductive rationales for the trilateral partnership.

Trilateralism should not be sought merely for trilateralism’s sake. A trilateral arrangement involving the United States, the ROK, and Japan is a partnership that can accomplish more when its members come together than when each country attempts to accomplish similar goals unilaterally or bilaterally. In the face of North Korea’s continued nuclear resolve, a trilateral partnership is not only advantageous but necessary to protect each country’s citizens and to preserve a rules-based order in Asia.

The findings and analysis in this essay are based on a three-year project on U.S.-ROK-Japan trilateralism organized by the National Bureau of Asian Research, which will publish a full-length report in spring 2018.

Alison Szalwinski is Director of Political and Security Affairs at NBR. She is the author of numerous articles and reports and co-editor of the last three Strategic Asia volumes.

Michelle Cho is a Congressional and Media Relations Intern at NBR. She is also a John Henry Wigmore Fellow at Northwestern Pritzker School of Law, where she is pursuing her JD and LLM in international human rights. 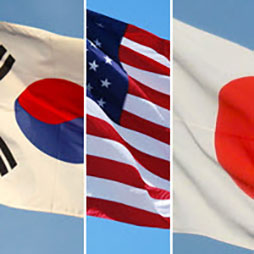