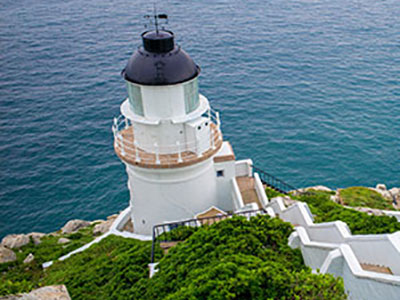 Steven M. Goldstein (Harvard University) highlights the main findings of the NBR Special Report “Taiwan: Asia’s Orphan?” and explains how Taiwan’s perception of its “orphan” status in the international system shapes its strategic culture, as well as its approach to its relationships with China and the United States.

The 2016–17 Strategic Asia Program examines the strategic cultures of major Asia-Pacific countries—that is, the historical foundations and inherited ideologies that underlie their collective identity and inform their decision-making process. As part of this initiative, Steven M. Goldstein, the director of the Taiwan Studies Workshop and an associate at the Fairbank Center for Chinese Studies at Harvard University, authored an NBR Special Report on Taiwan’s strategic culture.

In this Q&A, Dr. Goldstein highlights the report’s main findings and explains how Taiwan’s perception of its “orphan” status in the international system shapes the island’s strategic culture and approach to its relationships with China and the United States.

How is Taiwan’s strategic culture shaped by its relationships with the United States and China? How has this played out in Taiwan’s policymaking?

The central tenet of Taiwan’s strategic culture is the perception that the island’s government is not recognized as that of a sovereign nation state and as a result is excluded from full participation in the international system as a “normal state.” The principal cause of this situation is the confluence of the positions of the United States and China. Since establishing formal relations with each other in 1979, Washington and Beijing have agreed on Taiwan’s lack of sovereign status, with much of the world following suit.

However, the Chinese and U.S. positions on the status of Taiwan and the nature of their relationships with the island differ. For China, Taiwan is a part of the People’s Republic of China. Cross-strait relations are therefore a matter of domestic policy and not subject to foreign interference. The United States acknowledges this position but has refused to accept or adopt it, maintaining instead that Taiwan’s future status should eventually be settled by peaceful means by the people on both sides of the strait. Washington has established a robust, yet unofficial, economic and security relationship with Taiwan that offsets Chinese attempts to use international isolation to leave the island’s government no alternative but to accept unification or face military means to achieve it.

The operational aspect of Taiwan’s strategic culture derives from this view. The island seeks to maintain its separation from the mainland and enhance its international position by resisting mainland efforts and exploiting the flexibility in the U.S. position. At the same time, it is mindful of not provoking the mainland or complicating the United States’ relations with China.

In what ways has Taiwan’s history played a role in the formation of its strategic culture? Further, how have other factors, such as identity and value systems—especially following Taiwan’s democratization—contributed to the present-day configuration of Taiwan’s strategic culture, given its fluidity?

Two historical events of the past century have played a crucial role in the formation of Taiwan’s strategic culture. The first was the occupation of the island by the Kuomintang (KMT). Following World War II, the KMT imposed authoritarian rule on the existing residents of the island, who had lived under 50 years of Japanese occupation. This continued during decades of martial law following the KMT’s defeat in the Chinese Civil War and subsequent retreat to Taiwan. The second was the island’s democratization, which began in the late 1980s. The harsh rule of the mainlander KMT had contributed to the growth of a Taiwan-centric domestic identity. Democratization made possible its political expression on the island and, with it, the impulse for an international place based on such identity.

How has Taiwan’s “orphan” mentality manifested itself in domestic politics? In particular, does it shape party platforms?

Yes, very definitely. Both political parties have pledged to ameliorate that status by expanding Taiwan’s international profile. However, they have gone about it somewhat differently. The KMT administration of Ma Ying-jeou (2008–16) envisioned improvement in Taiwan’s international profile as linked to better relations with the mainland. Ma spoke of a “diplomatic truce” whereby Beijing would no longer seek to pick off the few states with which Taiwan had relations and would accede to Taiwan’s participation (though not membership) in certain international bodies. In return, he subscribed to an ambiguous formula (the 1992 Consensus) that apparently satisfied Chinese demands for recognition that Taiwan is a part of China. [1] However, Ma had only limited success and was politically damaged by the perception in Taiwan that his mainland policies were threatening the island’s sovereignty.

This approach contrasted with the policies of the previous administration of the Democratic Progressive Party (DPP) under Chen Shui-bian (2000–2008). Chen sought to establish Taiwan’s separateness from the mainland through constitutional reform that would make it a “normal country.” He also endeavored to raise the island’s international standing through unilateral actions, such as applying for membership to the United Nations as “Taiwan.” Chinese threats, as well as warnings from the United States regarding the consequences of these actions, blunted Chen’s efforts.

The present DPP administration of Tsai Ing-wen has not continued Chen’s provocative policies. However, Tsai also has not acceded to mainland demands that her government acknowledge the 1992 Consensus—an acknowledgment that the government in Beijing requires for the continuation of the previous level of cross-strait dialogue and international participation under Ma. U.S. policy has continued to support Taiwan’s “meaningful participation” in international organizations and, in line with this position, has continued to speak in favor of an increasing role for Taiwan in international security, economic, and humanitarian matters. However, these efforts have met with only limited success due to Beijing’s influence on the international stage.

As you note, Taiwan’s orphan mentality extends to its position in the international system. Has this perception hindered Taiwan’s role as a global player, or has the island been successful in spite of its limited international space?

For the most part, the orphan mentality is based on a realistic assessment of Taiwan’s place in the world from the perspective of politics and security. It is a fact, however, that participation in organizations such as UN specialized agencies, even as an observer or “guest,” has been blocked by Beijing due to Tsai’s refusal to accept any formulation, including the 1992 Consensus, that holds that Taiwan is a part of China. However, the sense of being an orphan obscures for many in Taiwan, as well as for many in the international community, an appreciation of the important role that Taiwan plays in the international economy and the broad range of “unofficial” relations with numerous countries maintained by its liaison offices.

In your NBR Special Report, you argue that Taiwan’s orphan status is a central element of its strategic culture. Do you think that the leadership in Beijing understands and weighs this factor in its approach toward the island? Does this work in favor of or counter to China’s broader Taiwan strategy?

Beijing unquestionably understands the salience of this factor in the thinking of Taiwan’s people and leaders. A central thrust of Chinese policy is to seek to isolate Taiwan in the international system and to insist that participation can only come as a part of China. In other words, international isolation of Taiwan is an element of the mainland strategy of leaving Taiwan no choice but to accept the concept that it is a part of “one China” now and ultimately to seek unification. Whether this strategy contributes to the long-term goal of unification is debatable, as it has generated considerable backlash and ill feeling on the island.

Which components of Taiwan’s strategic culture are particularly pertinent for U.S. officials to understand in formulating key policies toward the island?

U.S. policymakers should be conscious of the two aspects of the orphan mentality—the sense of isolation and the fear of abandonment. The United States, though seen as having abandoned Taiwan in 1979, is still today considered the island’s most important ally. As illustrated during the first decades of Taiwan’s democratization, the challenge for Washington is to constrain Taiwan when its quest for international space seems to be endangering regional stability and at the same time to support its pragmatic international role and provide assurances that the United States will not abandon the island.

[1] According to the Ma administration, the 1992 Consensus was derived from a 1992 meeting in Hong Kong between the representatives of the then KMT-led government and their Chinese counterparts. The consensus’s stipulations—that each side would state its own interpretation of “one China”—were first applied to the negotiations for the 1993 Singapore meeting between Taiwan and China. The Taiwan side maintained that Taiwan was a part of China, with the qualification that the China of which Taiwan was a part was its own Republic of China. However, it is noteworthy that the term 1992 Consensus itself was not coined until 2000 by Su Chi, a KMT official, in the aftermath of the DPP’s first electoral victory for the presidency.

Steven M. Goldstein is the Director of the Taiwan Studies Workshop and an Associate at the Fairbank Center for Chinese Studies at Harvard University.

This interview was conducted by Jessica Drun, a Bridge Award Fellow with NBR’s Political and Security Affairs group.