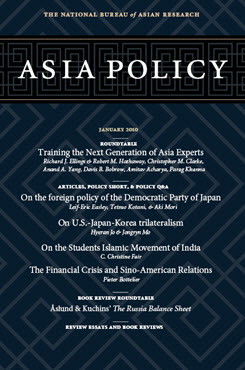 This roundtable addresses the question of whether we are adequately training the next generation of Asia experts and how we might do so through new initiatives like the National Asia Research Program. Authors touch on the barriers and bridges between academia and policymaking, the skills and expertise valued for young government analysts, the divide between area studies and the social sciences, the identity of Asia, and the role of language study in acquiring area expertise.

Gen Next: Are We Adequately Training Our Next Generation of China Intelligence Analysts?
Christopher M. Clarke

Asian Studies Past, Present, and Future
Anand A. Yang

The Idea of Asia
Amitav Acharya