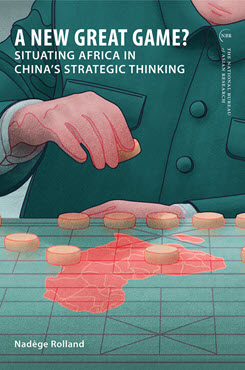 This new NBR Special Report by Nadège Rolland constitutes the first phase of a two-year project to assess China’s strategic inroads on the African continent. The report situates Africa in Xi Jinping’s strategic vision, describes the instruments that China might use to achieve its objectives, and identifies potential challenges.

Absent from the abundant available scholarship dedicated to China’s growing role and presence on the African continent is a study of whether and how Africa fits into Beijing’s grand strategy, as seen by Chinese strategic thinkers. This report fills this gap. Serious strategic discussions about Africa only began in China after the Chinese leadership adopted a global outlook. Beyond economic engagement and development assistance, Chinese strategists evidently envisage the continent as an essential piece in an escalating geostrategic contest for global influence between China and the U.S.-led West. Beijing’s emerging strategy aims at making the continent fit into a new subsystem comprising much of the “global South” that China aspires to dominate. China’s “new great game” seeks to outflank the U.S. by mobilizing African endorsement of China’s distinctive institutions and governing ideology. To that end, China aims to persuade African countries to adopt aspects of its political and economic system. Contrary to Beijing’s protestations, and despite the skepticism of many Western observers, China is in fact preparing to export its model to Africa and perhaps to other parts of the developing world as well.