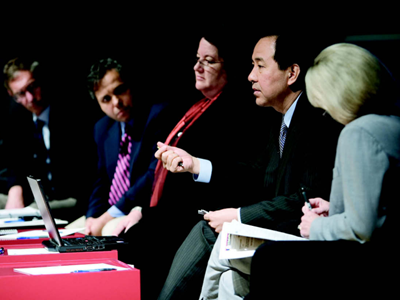 From the Pacific Health Summit

In 2006, the Summit continued its focus on emerging science and technology and its intersection with health policy, particularly in the area of “early health” and the value of early detection and intervention. Plenary sessions focused on cost-associative benefits of prevention-based health care, the antaean, pre-emptive value of vaccines, and the role that mobile technology, health information collection and sharing across networks, and other innovations have to play in streamlining care and reducing pecuniary burdens. Against the backdrop of the recent SARS and avian flu concerns, participants also met on the pressing question of how to prepare for the next pandemic.

Chronic Neglect
This article in the 2006 September/October issue of Foreign Policy magazine examines the rise of chronic diseases in the developing world.

Pandemic Preparedness and Health Information Technology and Policy
This is a report from a Breakout Session at the 2006 Summit.

Pacific Health Summit Program Notes
The 2006 Pacific Health Summit was held in Seattle and continued the focus on emerging science and technology and its intersection with health policy, particularly in the area of “early health” and the value of early detection and intervention. This is a summary report by the NBR Center for Health and Aging on the 2006 Summit.

Lost in Translation: How Do We Prioritize So That Today’s Best Science Becomes Tomorrow’s Affordable Medicine?
This is a Breakout Session report from the 2006 Summit.

Fighting Fat—Preparing for the Global Obesity Epidemic
This is a Breakout Session report from the 2006 Summit.

Preparing for the Aging Challenge
This is a Breakout Session report from the 2006 Summit.

East Meets West – Staying Healthy vs. Curing Disease
This is a Breakout Session report from the 2006 Summit.

Responding to the Modern Lifestyle: A Personal Approach to Health Using Chinese Medical Sciences
This is a report from the October 15, 2007, Personal Health Workshop held in Beijing, which was co-presented by the NBR Center for Health and Aging, the China Academy of Chinese Medical Sciences, and the Shanghai Center for Systems Biomedicine with support from Coca-Cola’s Beverage Institute for Health & Wellness, and Intel.

Integrating People and Approaches Toward Personal Health
This June 2006 launch publication for the Personal Health Lab examines the benefits of integrating Western and Eastern approaches to health and medicine as well as how that integration can occur at the government, cultural, and local levels, between doctor and patient.