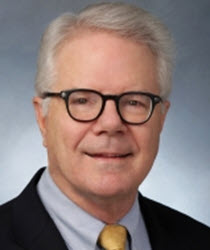 David M. Lampton is a member of the Board of Advisors at the National Bureau of Asian Research.

He is Professor Emeritus and former Hyman Professor and Director of SAIS-China and China Studies at the Johns Hopkins School of Advanced International Studies, having also served as Dean of Faculty from 2004-2012. Formerly President of the National Committee on United States-China Relations, he is the author of many books, including Following the Leader: Ruling China, from Deng Xiaoping to Xi Jinping (University of California Press, 2019) and The Three Faces of Chinese Power: Might, Money, and Minds (University of California Press, 2008), with prior publications appearing in: Foreign Affairs, Foreign Policy, The American Political Science Review, The China Quarterly, The New York Times, The Washington Post, and many other venues popular and academic in both the western world and in Chinese speaking societies. He received his BA, MA, and PhD degrees from Stanford University. Dr. Lampton headed the China Studies programs at the American Enterprise Institute and at The Nixon Center (now The Center for National Interest), having previously worked at the National Academy of Sciences and having started his teaching career at Ohio State University. He has an honorary doctorate from the Russian Academy of Sciences’ Institute of Far Eastern Studies, is an Honorary Senior Fellow of the American Studies Institute of the Chinese Academy of Social Sciences, was the inaugural winner of the Scalapino Prize in July 2010 awarded by the National Bureau of Asian Research and the Woodrow Wilson International Center for Scholars, and is a Gilman Scholar at Johns Hopkins. He consults with government, business, foundations, and is on the board of several non-governmental and educational organizations, including the Executive Committee of the National Committee on US-China Relations and Colorado College’s Board of Trustees. He was a fireman at Stanford University in his undergraduate days and was in the enlisted and officer ranks of the US Army Reserve.