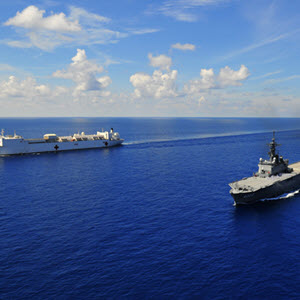 
On July 17, 2020, NBR held a virtual discussion accompanying the release of the report “A New U.S. Strategy for the Indo-Pacific” by Roger Cliff. The Indo-Pacific is a region of critical importance to the United States, but one in which the country is likely to face major challenges in coming years. These challenges include China’s rising power, North Korea’s nuclear program, the spread of authoritarianism, and global climate change. However, the Indo-Pacific also presents major strategic opportunities for the United States. This report presents a comprehensive and coherent U.S. strategy for the region.

Roger Cliff conducts research on international relations in the Indo-Pacific. He has worked for the Center for Naval Analyses, Atlantic Council, Project 2049 Institute, RAND Corporation, and Office of the Secretary of Defense. He holds a PhD in international relations from Princeton University, an MA in Chinese studies from the University of California–San Diego, and a BS in physics from Harvey Mudd College.

Jennifer Staats is the Director of East and Southeast Asia Programs at the U.S. Institute of Peace (USIP), where she oversees the USIP’s work on Burma, China, and North Korea. She previously spent time at the Office of the Secretary of Defense and the Harvard Kennedy School’s Belfer Center for Science and International Affairs. She received her PhD from Harvard University, her MPA from Princeton University’s Woodrow Wilson School, and her BA from the University of the South (Sewanee).

Roy D. Kamphausen is President of the National Bureau of Asian Research (NBR). In April 2018, he was appointed by Senate Majority Leader Mitch McConnell to be a commissioner on the U.S.-China Economic and Security Review Commission. Prior to joining NBR, Mr. Kamphausen served as a career U.S. Army officer. He holds a BA in political science from Wheaton College and an MA in international affairs from Columbia University