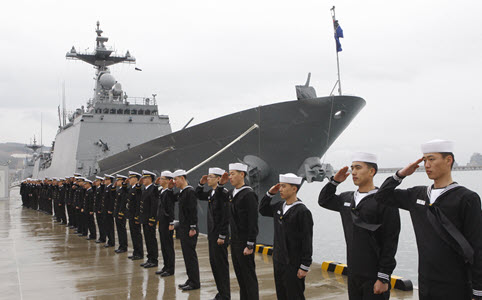 South Korean Navy sailors salute during a ceremony marking the launch of the “Cheonghae” unit consisting of a 4,500-ton destroyer with 270 crew, a helicopter and 30 special forces in southeastern port city of Busan on March 3, 2009. South Korea launched a 300-strong task force which will deploy on a destroyer to help fight piracy off Somalia where several Korean ships have been seized. AFP PHOTO/CHOI JAE-HO (Photo credit should read CHOI JAE-HO/AFP via Getty Images)