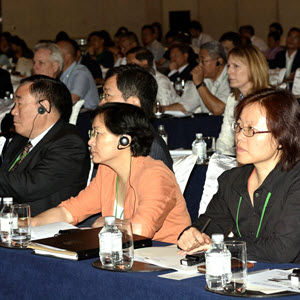 
More than 200 leaders from government, business, and research and 60 energy journalists gathered in Beijing, China, on May 27–29, 2015, for the 6th annual Pacific Energy Summit. The 2015 Pacific Energy Summit was co-hosted by the National Bureau of Asian Research and the China Energy Research Society. The Summit hosted three on-the-record media roundtables on “U.S.-China Energy Cooperation,” “The Geopolitics of Oil and Gas in Asia,” and “Health and the Environment.” Please find below audio for each roundtable and links to featured expert quotes. These materials will inform media and policymakers about key energy, pollution, and geopolitical challenges facing countries in the Asia-Pacific.

ECNS/CNTV, May 29, 2015
“China’s energy consumption in period of medium-low growth“

The Globe and Mail, May 28, 2015
“China faces sharp slowdown in natural gas demand“

About the Pacific Energy Summit

The annual Pacific Energy Summit is an invitation-only event that convenes leaders from government, business, and research to explore innovative solutions to the dual challenges of rising energy demand and a changing climate.