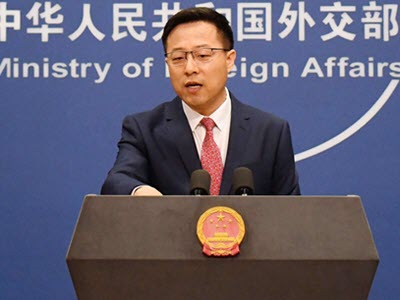 In recent years, the Western world has seen a shift in the way Chinese diplomacy is conducted. In contrast with Deng Xiaoping’s strategy of “keeping a low profile,” Chinese officials have more openly expressed controversial thoughts, often with negative ramifications for bilateral relations with other countries. During the Covid-19 pandemic, this behavior has become known as “wolf warrior diplomacy.” Joanna Nawrotkiewicz spoke with Peter Martin, author of China’s Civilian Army: The Making of Wolf Warrior Diplomacy (2021), to better understand the origins and impact of China’s new diplomatic tactics.

What is wolf warrior diplomacy, and where did the concept originate? What incentives are driving Chinese officials to engage in this kind of diplomacy?

Wolf warrior diplomacy has become the shorthand expression for a new, assertive brand of Chinese diplomacy. In the past, Chinese diplomats tended to keep a lower profile and to be quite cautious and moderate in the way that they interacted with the outside world. Recently, however, they have become far more strident and assertive—exhibiting behavior that ranges from storming out of an international meeting to shouting at foreign counterparts and even insulting foreign leaders.

This turn in Chinese foreign policy has been slowly building since 2008–9 and accelerated after Xi Jinping came to office in 2012–13. After the outbreak of the Covid-19 pandemic, Chinese diplomats felt under attack but also proud of the way that their country has handled the crisis. The new mixture of confidence and increasing insecurity combined to create what we now call wolf warrior diplomacy.

Chinese diplomats believe they have been under great pressure for many years, have been constantly lectured by the United States and others about the rights and wrongs of the Communist system, and have been historically looked down upon by the Western world. They can still recall the period of “national humiliation,” either personally or from the experiences of parents and grandparents who grew up during this time and suffered tremendously at the hands of foreign powers.

As an example, when Wu Jianmin was a kid, guards at the French Embassy in Nanjing punished him for playing outside its grounds by setting dogs on him. Years later, he became China’s ambassador to France. With this experience and mindset, many Chinese diplomats see before them an opportunity to stand up for China with a clarity and confidence that had never been available before. Many, but not all of them, see wolf warrior diplomacy as much more defensive than aggressive in nature.

How does the concept of “wolf warrior diplomacy” interact with the narrative of China’s peaceful rise? Do you see them as contradictory or complementary?

In my opinion, many people in China’s foreign policy establishment would say these two concepts are contradictory. The idea of peaceful rise was developed when China’s economy began to grow very rapidly and its military power was increasing. Chinese leaders wanted to reassure the outside world that their intentions were peaceful and that China’s rise would not mean major disruptions to the international system or pose a systemic threat to the liberal international order. This international reassurance took many forms, from promoting soft power to developing China’s ability to distribute aid overseas.

What we have seen under Xi Jinping is far more focused on the idea that China’s system is successful, and that the Chinese Communist Party should not have to apologize for the way the country works. When China is not given the respect Chinese officials and top diplomats believe it should receive, there will be a backlash.

How does China’s wolf warrior diplomacy play out on online platforms? Do we see the same kind of activity by Chinese officials on Weibo as on Twitter?

The behavior that attracts the most attention has been on Twitter rather than Weibo. The use of social media by Chinese diplomats is a very new phenomenon. The Chinese foreign ministry was slower, even than other parts of the Chinese government, to adopt social media, especially Twitter. At first, Chinese diplomats did not have a large social media following. The first one to gather a large audience was Zhao Lijian—spokesperson of the Ministry of Foreign Affairs and previously a diplomat posted in Pakistan. After his rise on social media, the foreign ministry realized the power these platforms could have to directly engage with both Western elite and the Western public.

With the widespread adoption of Twitter over the last few years, diplomats who might not otherwise have been noticed gained a voice and could engage with most of their foreign counterparts. Therefore, Twitter and social media in general have become an integral tool for wolf warrior diplomacy. The majority of Chinese diplomats using these platforms are aiming not to influence Chinese citizens but rather to capture the attention of either the foreign ministry or leaders in Beijing.

Considering the increased presence of Chinese diplomats on social media platforms such as Twitter, do you think Western politicians will need to become equally active on social media to balance the level of influence?

In my experience, Western politicians are already very active on Twitter, so there is not much that they would need to do in terms of balancing out China’s influence. Moreover, Chinese diplomats struggle with persuading international audiences because China’s propaganda apparatus strictly controls the messaging, resulting in content that Western viewers do not find compelling.

From China’s perspective, Western politicians have an advantage because Western media institutions are far more trusted globally and have far greater international reach than their equivalents in China. In some ways, the reliance of Chinese diplomats on social media channels reflects their frustration that they cannot reach the audiences they want through traditional media. Nonetheless, we can expect an intensification of activities in the conventional media sector.

Are all Chinese diplomats obligated to practice wolf warrior diplomacy?

Wolf warrior diplomacy is a tactic. All Chinese diplomats are capable of using the tactic when they need to. What has been notable in recent years is that diplomats have strongly embraced wolf warrior diplomacy and made it the dominant way that they interact with the outside world and with foreign audiences. It seems that this kind of behavior is being rewarded by the party center. Those who like Zhao Lijian have indulged in this tactic have often been promoted very rapidly.

I think that there are quite a few Chinese diplomats who have serious misgivings about the way that China is communicating and the damage that wolf warrior diplomacy seems to be doing to Beijing’s reputation abroad. The problem for those who doubt the tactic is Xi Jinping. Judging by his speeches, as well as his actions, Xi will continue rewarding people who conduct diplomacy in a more assertive manner. Those who have misgivings need to keep their thoughts to themselves for now, or they will face political repercussions.

You argue in your book that hostile diplomacy has been a long-standing tactic used by the People’s Republic of China from its inception. However, considering the negative reactions to these diplomatic tactics in other countries, is there any indication that the PRC will change its strategy?

Many Chinese diplomats are aware that the response to wolf warrior diplomacy has been very negative and actually damaged China’s interests in a wide range of cases. However, as during previous periods of assertive diplomacy from China, the primary audience is domestic politicians. Therefore, the reaction of foreigners and outsiders is not a top motivator for Chinese diplomats.

There have also been times, nonetheless, when China was more diplomatically isolated and the behavior of its diplomats undermined its international reputation. This led to very impressive periods of rethinking and recalibration, and the PRC was able to shift gears to charm the outside world, win friends, and gather genuine support. Examples of such eras would include the Geneva and Bandung Conferences in the mid-1950s or the aftermath of the Tiananmen Square massacre in the early 1990s.

What surprises many China watchers is that the same brand of rigorous rethinking has been so slow to materialize in recent years. Xi Jinping indicated in his remarks over the summer to the Politburo study session that China needed to work harder to cultivate a lovable and trustworthy image. However, there is not much evidence indicating that the specific tactics involved in wolf warrior diplomacy would be addressed and recalibrated in the short term.

Peter Martin is a Defense Policy and Intelligence Reporter at Bloomberg and the author of China’s Civilian Army: The Making of Wolf Warrior Diplomacy (2021).

This interview was conducted by Joanna Nawrotkiewicz.