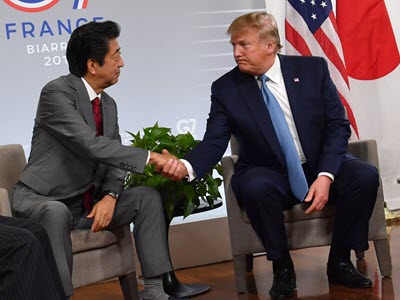 Promoting Good Governance in the Global Commons through the U.S.-Japan Alliance

In this episode of NBR’s Asia Insight, NBR’s senior director of public affairs Dan Aum interviews Kristi Govella to discuss the opportunities and challenges for U.S.-Japan cooperation in the global commons.

This interview is available in video or podcast format.

Kristi Govella is an Assistant Professor of Asian Studies at the University of Hawaii at Mānoa, an Adjunct Fellow at the East-West Center, and an Adjunct Fellow at Pacific Forum. She was also a 2019 National Asia Research Fellow with NBR. Dr. Govella specializes in international relations in Asia, with a particular focus on the intersection of regional economic and security policy. Her publications include Linking Trade and Security: Evolving Institutions and Strategies in Asia, Europe, and the United States (2013). Dr. Govella was a postdoctoral fellow at Harvard University and an associate professor at the Daniel K. Inouye Asia-Pacific Center for Security Studies. She holds a PhD in political science from the University of California, Berkeley.

1:59 “How did you first get interested in Asian studies and Japanese politics?”

4:00 “What are the main domains of the global commons, and why are they relevant today?”

6:03 “Why is the global commons becoming more contested and competitive these days?”

7:22 “What are some unique challenges presented by the global commons?”

10:33 “Can you explain the implications of China’s growing influence in the global commons?”

14:40 “How has Japan perceived China’s challenges and how are they responding?”

17:05 “How is the United States approaching China’s growing influence in the global commons?”

20:21 “What are the strengths and weaknesses of the United States, Japan, and China when it comes to competing in the global commons?

24:48 “How can the United States and Japan cooperate to promote good governance in the global commons?”

27:40 “How might privatizing space affect the increasingly crowded domain of outer space?”

32:42 “Which domain in the global commons do you think will be most important in the short term (next year)?”

34:58 “What advice would you give to a young graduate student who is interested in pursuing the study of U.S.-Japan relations or the global commons?”

This episode was made possible through the generous support of the United States-Japan Foundation.

Kristi Govella, “Crafting Policy for Contested Commons: Insights from Japan’s Approach to the Outer Space, Cyberspace, and Maritime Domains” in Japan’s Leadership in the Liberal International Order: Impact and Policy Opportunities for Partners.
Kristi Govella, “Technology and Tensions in the Global Commons” in Fletcher Security Review.
Kenneth B. Pyle, Japan in the American Century.
Sheila Smith, Japan Rearmed: The Politics of Military Power.