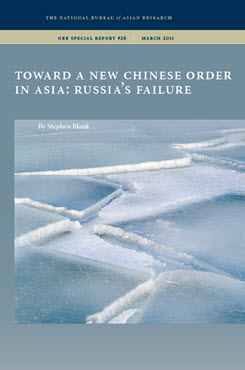 Toward a New Chinese Order in Asia
Russia's Failure

Although China’s recent economic and military policies have stimulated arguments about a potential clash with the U.S., this essay contends that China’s most lasting and tangible gains have come at Russia’s expense, both in the Russian Far East (RFE) and in Central Asia.

Russia’s political and economic failure to develop the RFE has undermined its quest for stable great-power status in Asia and its ability to play that role there. As a result, Russia has been forced to turn to China for help. In so doing, it has not only conceded its failure but also allowed China to begin consolidating a new economic and security order in Asia at Russia’s expense, including in the RFE. To the degree that these trends continue along present lines, Russia will become China’s junior partner and supplier of raw materials, not an independent power in Asia.