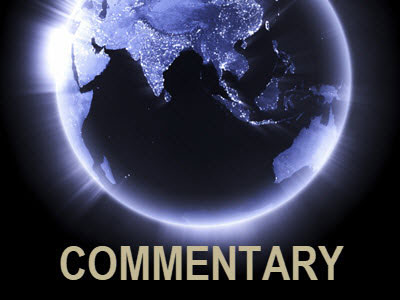 The Unthinkable with North Korea
A Tilt at the Fulcrum of World Power?

Richard J. Ellings (NBR) argues that North Korea and the United States share strategic interests in checking a rising China and outlines steps that the United States could take to exploit this opportunity prudently.

Mercurial prospects for the Trump-Kim summit may give the impression that North Korea and the United States simply share no significant interests. But there is a geopolitical threat shared by both nations that, if prudently exploited, could draw them into limited strategic cooperation.

To be sure, recent developments reflect the typical challenges of negotiating with one of the most heinous regimes of our time. The Democratic People’s Republic of Korea (DPRK) canceled a meeting with officials from the Republic of Korea (ROK), citing its displeasure with the ongoing air exercises between the United States and the ROK called Max Thunder. This is just the kind of bluster for which North Korean negotiators are infamous. The exercises have been long scheduled and follow the annual U.S.-ROK war games in April. The more serious development last week was the statement by North Korean vice foreign minister Kim Kye-gwan, who did not mention Max Thunder. Instead, responding to a TV interview with U.S. national security advisor John Bolton, he called into question future talks if the United States simply demands that the North surrender its nuclear capabilities.

Indeed, Bolton had outlined a total denuclearization process akin to Libya’s. While the three leaders—Moon, Trump, and Kim—have all talked of total denuclearization as a goal, Bolton is the first high-ranking official to assert what the process would look like. In his view, the North would need to give up its nuclear weapons in short order and with full verification—or presumably we’d stay where we are, with the United States exerting maximum economic and diplomatic pressure and considering military options. The response from the vice foreign minister was that unilateral nuclear disarmament is simply not on the table.

No kidding. Bolton may have been posturing or following a different game plan from the president, but the North’s decades-old and remarkably successful nuclear and missile programs are essential to its security and progress toward other goals. Expecting North Korea to commit to immediate total denuclearization is wholly unrealistic. If you are in Pyongyang today and responsible for North Korea’s security and other interests, what are your two paramount objectives?

One is solving the challenge from the north, across the Yalu River. Yes, the north. Poorly understood outside the DPRK is that the historic enemy, China, poses a far greater long-term threat to the country than the United States or the ROK, while serving simultaneously as its economic lifeline. North Korea’s strategic vulnerability to China might need no more explanation than a quick look at the map and a review of the current power-projection capabilities of China’s land, air, sea, space, and cyber forces. In conventional military power, China now ranks second to the United States. Economically, the story is even more lopsided. The entire North Korean economy does not add up to that of a single major Chinese city, and about 90% of the North’s trade is with China. Beijing regularly exercises this strategic and economic leverage through deployments near the border, diplomatic reprimands, economic sanctions, crafted investments, and shipments of just enough oil to keep some lights on. Strategic vulnerability and economic dependency are not characteristics to which any nation aspires, let alone the fiercely nationalist dictatorship of the Kim regime.

North Korea’s concerns about China are not new, and not just based on the long history of Chinese invasions, tributary requirements, and at times brutal suppression. Japan’s victory over the Qing Dynasty in 1895 brought a hiatus in that history, but only 55 years later China again intervened militarily. This time China acted to preserve a buffer between itself and U.S.-led forces marching toward the Yalu, due to Kim Il-sung’s ill-considered war to unite the peninsula. Thirteen years after the Korean War, during Mao’s Cultural Revolution, bilateral relations deteriorated sharply. The Korean Workers’ Party rejected Mao’s teachings, the governments withdrew their ambassadors, and shooting broke out at the border. Diplomatic relations did not resume for nearly four years.

Nor did China please the North when it broke ranks with the Soviet Union in favor of rapprochement with the United States in the 1970s and 1980s. During this period, Kim Il-sung played China and the Soviet Union shrewdly to obtain all he could from each, whether it be nuclear technology and materials, military equipment, or economic and diplomatic support. Once the Soviet Union collapsed, China cut its grain aid precipitously, hastening the famine that struck the North in the mid-1990s. In more recent years, relations have continued to be difficult, with Pyongyang’s belligerence and economic policies testing Beijing’s patience and incurring sanctions.

For Koreans on both sides of the Demilitarized Zone (DMZ), Chinese ambitions to be preeminent regionally and globally rekindle palpable memories and foster deep-seated worries. To understate the point, the salience of China’s rise is not lost on some of the world’s greatest proven survivalists, the Koreans. As Kim Jong-un knows, the DPRK is useful to China only so long as it serves as a buffer with U.S.-allied South Korea, as a distraction and financial burden to the United States, and as a test of U.S. and ROK resolve. Prospects for the proposed summit have to concern China. As President Trump pointed out, North Korea’s actions in the wake of the second summit between Xi Jinping and Kim suggest that China is playing the spoiler, angling to influence the summit process, if not derail it altogether.

Besides avoiding a vassal fate, the North’s second major objective is to extend the Kim dynasty’s rule over the whole of the Korean Peninsula. Those who point out that its nuclear weapons challenge the U.S.-ROK alliance are correct. What Kim has found out through all his tests and bullying, however, is that the United States considers a preemptive attack on the North as a real option, perhaps targeting the leader himself; that the U.S.-ROK alliance and defense commitments remain strong; and that the sanctions against the DPRK hurt.

While forcible reunification may seem to Kim a more distant possibility today than a year ago, the dictator has garnered Washington’s and Seoul’s attention and hopes to address the most pertinent questions facing his regime. What is the scenario by which the North escapes strategic vulnerability to and economic dependence on China? Without help from elsewhere—say strategic support from the United States and economic support from the ROK—there isn’t one. What is the scenario by which the DPRK shrimp keeps from being eaten by the Chinese whale indefinitely? Again, without outside help, there isn’t one.

Consequently, Pyongyang likely now seeks greater strategic and economic security by engaging southward and eastward to obtain broad diplomatic recognition, enhanced deterrence, reductions of sanctions, diversification of supply lines and markets, and economic growth—and in the process exploiting weaknesses in the South. It may now aim to keep China at bay, just as China kept the Soviet Union at bay (and got rich)—with the United States as its strategic partner. Already Pyongyang has been tactically shrewd. Indeed, its diplomatic cleverness is never to be underestimated. Think how useful the North’s tactic has been to focus on the United States exclusively as justification for its nuclear and missile programs, not China, the real long-term threat.

To the extent that this assessment is accurate, what are the prospects of reaching an understanding with the Kim regime? Decent, but the process will be complicated. We cannot be naive about the regime’s hideous treatment of its own citizens and desire to extend its rule over the entire peninsula. The United States has coordinated strategically with erstwhile enemies before, such as China in the Cold War. This example suggests that double deterrence, including against a new strategic partner, can work. Meanwhile Washington must be careful to avoid provoking China, which is already wary about the summit. If China perceives itself as the target of a tacit U.S.-DPRK alliance, it might then decide to invade the North to install a puppet regime. For the foreseeable future the North’s nuclear deterrent against China is in the United States’ and its allies’ interest.

How, then, will the United States and the ROK reach an understanding with the Kim regime, one that flips the peninsula on its head, with the North becoming a buffer for South Korea, Japan, and the United States against China? It will be a complicated, delicate process, and the devil will be in the verifiable details. The United States and ROK would need the North to reduce the threat level to the South by capping production of nuclear weapons; repositioning major forces away from the DMZ, enough to preclude a surprise invasion; and reducing total numbers of troops. The South would reciprocate by commensurate force pullbacks and troop reductions. Additional steps would be capping the number of missiles that threaten Japan and the U.S. mainland (toward eventually eliminating ICBMs) and resolving the abductee issue to Japan’s satisfaction. Meanwhile, the United States, the ROK, and Japan would continue to strengthen their deterrence capabilities as well as missile defense. Would Pyongyang acknowledge the legitimacy of the U.S.-ROK alliance? If it does, and as the North and South take the steps above, economic sanctions unrelated to human rights could be lifted and other economic inducements offered.

Through the steps just outlined the United States could simultaneously (1) continue to deter North Korea and China, (2) bolster alliance cohesion and regional leadership, (3) check the growth of Chinese suzerain power, and (4) reduce the risk of war in Northeast Asia. Full denuclearization on the peninsula, as we have learned elsewhere in the world over the past 70 years, is a very long-term project.

Stability and prosperity in Northeast Asia require a dedicated U.S. policy that is based on hard-nosed assessments first and foremost of the material circumstances, histories, and interests of the region’s actors. If approached realistically, we could be watching the sequel to ping-pong diplomacy and rapprochement in the early 1970s, a strategic tilt at the fulcrum of the world’s biggest powers.

Richard J. Ellings is president and co-founder of the National Bureau of Asian Research.