← The U.S. Embassy in Seoul and Human Rights Policy 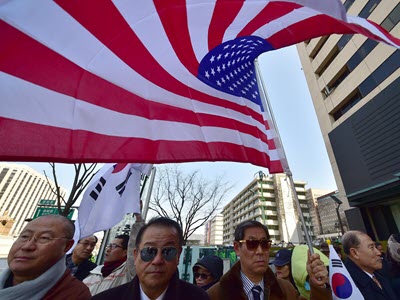 People hold South Korea and US flags during a pro-US rally denouncing the attack on US ambassador to South Korea Mark Lippert, outside the US embassy in Seoul on March 13, 2015. South Korean police handed their investigation into the knife attack on US ambassador Mark Lippert to prosecutors on March 13, recommending a charge of attempted murder for the “pre-meditated assault”. AFP PHOTO / JUNG YEON-JE (Photo by Jung Yeon-je / AFP) (Photo by JUNG YEON-JE/AFP via Getty Images)