← The Role of Technology in Disaster Management 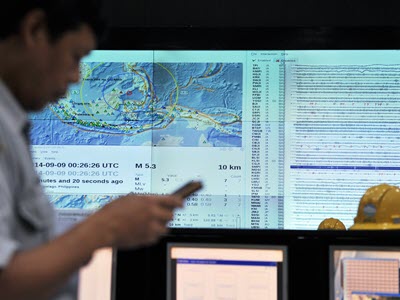 An Indonesian official (L) checks his phone for an SMS earthquake and tsunami warning alert during an Indian Ocean-wide tsunami exercise to test readiness in case of a massive earthquake and tsunami alert at the command centre of the quake monitoring and tsunami early warning division at Indonesia’s Agency for Meteorological, Climatological and Geophysics (BMKG) in Jakarta on September 9, 2014. Ten years after the 2004 tsunami killed more than 170,000 people in Indonesias Aceh province and tens of thousands elsewhere, 24 countries around the Indian Ocean participated in a large scale simulation exercise organized by the Intergovernmental Oceanographic Commission of UNESCO to test the Indian Ocean Tsunami Warning Mitigation System. AFP PHOTO / ADEK BERRY (Photo credit should read ADEK BERRY/AFP via Getty Images)