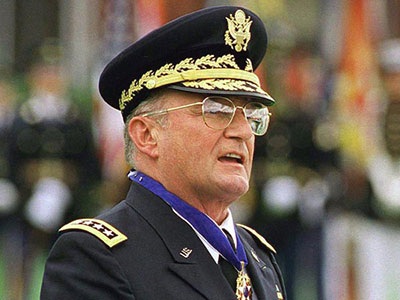 The Life and Legacy of Gen. John M. Shalikashvili

Lt. Col. (ret) Roy Kamphausen, Senior Associate for Political and Security Affairs at NBR, reflected on the legacy of this great patriot in a conversation with Andrew Marble, founding editor of NBR’s journal Asia Policy, who is researching and writing a biography on General Shalikashvili.

A memorial service was held August 6th for NBR Board Member General (ret) John Shalikashvili, 13th Chairman of the Joint Chiefs of Staff (1993–97), who passed away on July 23. General “Shali” joined the NBR Board in 1998 and played a critical role in, among other things, establishing the Strategic Asia Program and guiding NBR’s engagement with the U.S. national security community. In order to promote the values to which General Shali dedicated his career, in 2006 NBR established the John M. Shalikashvili Chair in National Security Studies to advance the study of national security issues and address critical U.S. interests in Asia. The first chair-holder was Admiral Dennis Blair, USN (ret), who subsequently served as Director of National Intelligence, and the current chair-holder is Admiral Thomas Fargo, USN (ret).

Lt. Col. (ret) Roy Kamphausen, Senior Associate for Political and Security Affairs at NBR, reflected on the legacy of this great patriot in a conversation with Andrew Marble, founding editor of NBR’s journal Asia Policy, who is researching and writing a biography on General Shalikashvili.

Roy Kamphausen: One of the highlights of my own military career was serving on The Joint Staff when General Shali was Chairman. Of course, I felt doubly fortunate when I joined NBR in 2004 and General Shali was one of NBR’s board members and a driving leader of national security studies at NBR. His was both a unifying and elevating presence. I often recall that in meetings on Capitol Hill and elsewhere a mere mention of Shali would galvanize and focus the discussion at a higher strategic level—one that focused ever more clearly on America’s true national security interests. Andrew, you have been focused on writing the story of General Shali. What is the most important thing that people should know about him?

Andrew Marble: This is no traditional military general. General Shali lived a life that was vivid and multidimensional—the stuff of dramatic cinema. His life inspires on three levels: the weighty accomplishments he effected in the security realm as a senior U.S. warrior-diplomat, the spectacular “only in America” immigrant success story he achieved, and the role model he is for others who desire to be both an effective leader and a decent human being.

Let’s start with his leadership roles as a warrior-diplomat. When he hung up his uniform after 39 years of service, he had just finished 4 years as Chairman of the Joint Chiefs of Staff (CJCS, 1993–97) in the first Clinton administration, and prior to that he had served as Supreme Allied Commander Europe (SACEUR, 1992–93) and as Assistant to CJCS General Colin Powell (1991–92). At General Shali’s retirement ceremony, President Clinton awarded him the Presidential Medal of Freedom, recognizing the General for working “tirelessly to improve our Nation’s security and promote world peace.” What were some of his accomplishments?

The main legacy General Shali left behind after serving in these senior positions was how he helped guide the world through the chaos of the immediate post–Cold War period. Though the world today is certainly far from serene, we can all remember the uncertainty that gripped the world once the Berlin Wall fell.

For example, in negotiations with the Russians and former Russian republics, it was Shalikashvili’s strategic thinking and diplomatic skills that were instrumental in helping secure any “loose nukes” that might have otherwise resulted in a catastrophic act of nuclear terrorism.

The Partnership for Peace and NATO enlargement programs that he and Madeleine Albright promoted, moreover, allowed former Soviet satellites and republics to build ties with and eventually join NATO. Without such institutional adjustment, Europe could easily have seen a new Cold War with Russia emerge. Imagine if we now had to deal with both a new iron curtain and the civilization-tinged confrontations of the post–September 11 world?

Finally, the calls to realize a “peace dividend” at the end of the Cold War brought dramatic downsizing to the U.S. military—cuts included 700,000 personnel (one-third of active forces) and a 38%–45% reduction in active divisions in Army, Navy, and Air Force branches during 1989–96. General Shali, along with others, managed to retain military readiness and cohesion despite such dramatic downsizing, and the principles that guided Shali’s thinking then may offer lessons for confronting today’s challenges.

General Shali also contributed to world peace and security through his role in the U.S. ratification of the Chemical Weapons Convention, his efforts to avert nuclear crises on the Korean Peninsula, and his oversight of successful military operations in Bosnia, Haiti, and elsewhere. In addition, he worked to improve military readiness by his articulation of Joint Vision 2010, a blueprint for increasing the interoperability of the U.S. service branches. But of all these accomplishments we’ve been discussing, which stands out as his signature?

I would say that without a doubt General Shali’s greatest moment was his command of Operation Provide Comfort. At the end of the first Gulf War, Iraqi forces had chased over 500,000 Kurds into the inhospitable mountains along the Turkish border. Lacking food, water, and shelter, Kurdish men, women, and children were dying at a rate of 1,000 per day. To avert a humanitarian crisis of catastrophic proportions, General Shali was called on to lead the operation. This was not only the first time the U.S. military had been tasked to resolve a major humanitarian crisis in the post–Cold War era, but Operation Provide Comfort has also served in many ways as a blueprint for the humanitarian operations the U.S. military has been engaged in since.

This operation grew to become incredibly complex. It eventually involved 35,000 soldiers from 13 countries as well as volunteers from over 50 NGOs trying to learn how to work together effectively. And they were successful. In a mere 90 days, Operation Provide Comfort returned all Kurds back to safe havens in Iraq. General Colin Powell, Chairman of the Joint Chiefs at the time, would later say that General Shali had worked “a miracle.”

When President Clinton nominated General Shali for the position of Chairman, he told the reporters gathered in the White House Rose Garden, “There is much more to his life than most Americans now know. It is a great American story. It began as so many American stories do: in another land.” Can you give us a sense of where and how General Shali’s story began?

The first time General Shali saw American soldiers was when he was only eight years old. It was early one spring morning in 1945, and he was standing on a bridge in the small German village of Pappenheim. He was stateless—a citizen of no country—because he had been born in Poland to exiles of the Russian Revolution. He was also a refugee, his family having fled to Germany after surviving the bloody Warsaw Uprising in 1944. Life, then, was not looking too promising for him.

That morning, he and other villagers were prying up bridge decking. They had been ordered to do so by the retreating German army, in a bid to slow down the advance of approaching American GIs. As dawn broke, he happened to glance across the river. There on the opposing bank, rifles at the ready, was the lead patrol of the advancing American units—this was his very first glimpse of American soldiers.

And to think that over 50 years later this former stateless refugee would be retiring as Chairman of the Joint Chiefs, the highest-ranking soldier in the world’s most powerful military. He was at once the first naturalized American, the first draftee, and the first soldier commissioned through Officer Candidate School to become Chairman. On this journey to the top, he commanded units at every level from battalion to division. By taking the long, hard road to the apex of his chosen profession, he certainly did realize the “American dream” that has inspired so many people to come to this country.

Even President Clinton didn’t know the full extent of the story. Very few people realize that the 13th Chairman of the U.S. Joint Chiefs of Staff actually came from royalty. The princely “Schalikachvili” family of Georgia traces its lineage back at least to the year 1400. And General Shali’s namesake was an Ivan Shalikashvili (Ivan is the Russian name for John) who performed so exceptionally during the Crimean War that he was awarded, by the Russian emperor himself, a gold saber inscribed “The Brave One.” Who would believe this refugee boy’s mother was born in the Tsar’s castle in St. Petersburg? Or that he was a direct descendent of the first Russian admiral to circumnavigate the world?

But through war—the Russian Revolution, the German invasion of Poland, the Warsaw Uprising, and other violence that was World War II—his extended family had become scattered and weakened. It was only by emigrating to the United States in 1952—on a ship named the S.S. America, believe it or not—that he would get the opportunity to turn the family fortunes around. And this opportunity would come, ironically enough, through a military career—the profession of warfare.

His life, then, is an even fuller American success story than most people know. It is much more than a “rags to riches” story—it is really one of riches to rags, and then back to riches.

Having touched a bit on the American success story, can you delve now into what you referred to as General Shali’s being a very successful human being? From my first-hand experience working with him, I knew that he never forgot his humble roots, and the soldiers who worked for him loved him for how down-to-earth and compassionate he was.

That’s exactly right. When General Shali retired, he had a solid reputation for being liked and respected by almost everyone he encountered—commander or subordinate, military or civilian, American or foreigner, friend or foe.

One key reason for his sterling reputation was how he treated people. General (ret) David Maddox, who worked for Shali when he was SACUER, once explained: “He’s unassuming, straightforward, and most importantly caring. He makes people feel comfortable. He cares what you say and what you think. I think that everyone—be it a private or a general—knows that he listens and cares about their views.” Admiral (ret) Mike Boorda, who also worked under Shali as SACUER and then as CJCS, agreed, adding “he has this way of listening to you and while you are talking he makes you feel you are the only person in the world.”

Let me close with an example, one which was related to me by the current holder of NBR’s Shalikashvili Chair—Admiral Thomas Fargo. He recalled an incident where he was at the hospital with his wife who was having surgery, and was summoned to a secure phone to speak with the CJCS. Apologizing for having to call at this inopportune time, Shalikashvili explained that Admiral Fargo was the only one available who could provide him the necessary information. “Once I relayed to the Chairman what he needed to know—information for an important briefing he had in one hour with the U.S. president—he spent five more minutes on the phone with me asking about details of my wife’s surgery. I never forgot this and neither did my wife. He showed his compassion.”

Andrew Marble is an editor and writer. He may be reached at [email protected]. To learn more about his upcoming biography on General John Shalikashvili, please visit the webpage www.shalibiography.com.

Roy D. Kamphausen is Senior Associate for Political and Security Affairs at NBR. Prior to joining NBR, Mr. Kamphausen served as a U.S. Army officer—a career that included service under three Chairmen of the Joint Chiefs.