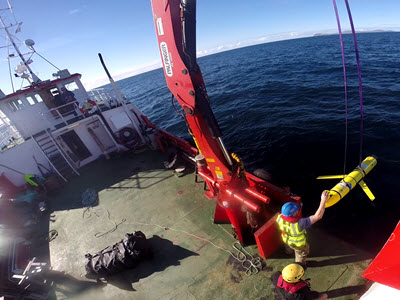 The Implications of China’s Seizure of a U.S. Navy Drone

Principal Investigator of the Maritime Awareness Project M. Taylor Fravel explains why China’s seizure of an unmanned underwater vehicle (UUV) operated by a U.S. naval auxiliary ship should be viewed as a purely political act, not an effort to enforce a particular interpretation of maritime law within a jurisdictional zone claimed by China.

On December 15, the latest incident between the United States and China in the South China Sea occurred. This episode involved China’s seizure of an unmanned underwater vehicle (UUV) operated by a U.S. naval auxiliary ship, the USNS Bowditch. The UUV, a glider that is part of the Littoral Battlespace Sensing system, was being used to collect oceanographic data, such as water temperature and salinity. The incident occurred as the Bowditch was about to recover the drone. Instead, a Dalang III—class Chinese naval submarine salvage and rescue ship, the ASR-510, launched a small craft and seized the drone. China returned the UUV on December 20.

According to the U.S. Department of Defense, the seizure occurred roughly 50 nautical miles (nm) northwest of the naval air station at Subic Bay. The map below shows the approximate location of the incident relative to the Philippine coast, China’s nine-dash line, and the disputed Scarborough Shoal. 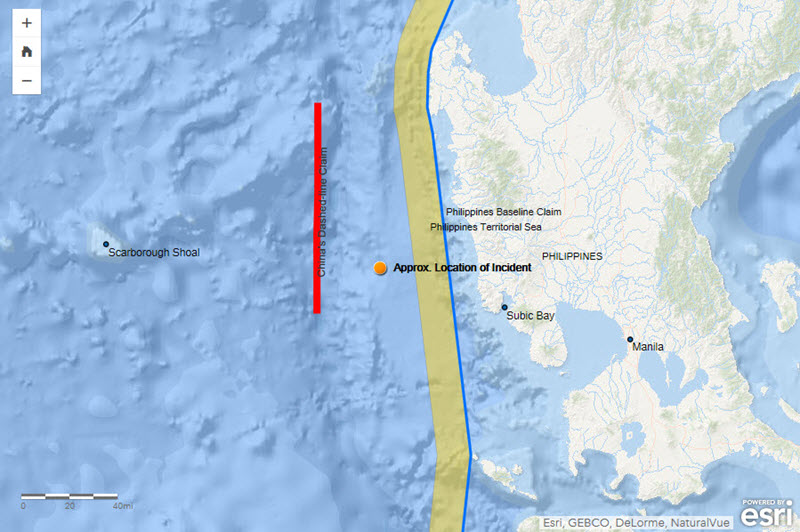 Map showing the location of the incident. The red line at left is the “nine-dash line” claimed by China. The blue line is the Philippines’ archipelagic baseline, and the yellow band is the Philippines’ territorial sea. Click here to visit the Maritime Awareness Project’s full Interactive map.

This location matters. Most importantly, the seizure did not occur in waters over which China claims any kind of maritime jurisdiction. Although within 200 nm of Scarborough Shoal, that land feature is a fringing reef with only a few rocks lying above high tide, and it would be entitled only to a 12 nm territorial sea and not a much larger exclusive economic zone (EEZ) under the UN Convention on the Law of the Sea (UNCLOS).

Moreover, as the map shows, the seizure occurred well to the east of the nine-dash line, outside and beyond China’s expansive claim in the South China Sea. Although China has never published coordinates for the nine-dash line, its representation on official maps, which were used as the basis for depicting the line on the Maritime Awareness Project’s interactive map, has been relatively consistent. In apparent confirmation of the approximate location of the incident, a statement by China’s Ministry of National Defense noted only that the incident occurred in “related waters of the South China Sea” (nanhai youguan haiyu) and not within “waters under China’s jurisdiction” (Zhongguo guanxia de haiyu). That is, even the Chinese government did not assert that the seizure occurred within waters over which it claims jurisdiction.

For this reason, the seizure should be viewed as a purely political act, not an effort to enforce a particular interpretation of maritime law within a jurisdictional zone claimed by China. By contrast, had the seizure occurred inside the nine-dash line or if China had stated that it occurred in waters under Chinese jurisdiction, then the seizure would have suggested that China was extending its opposition to U.S. military surveillance in the EEZ to most of the South China Sea.

As others have written, the seizure was unlawful because the drone enjoyed sovereign immunity as a U.S. vessel. As Julian Ku observes, for example, “the lack of legality is important because it shows that China is veering further away from a putative rules-based global order.” Lacking a legal basis for action, the intent can only be political.

China’s intentions, however, remain unknown. As tempting as it may be to attribute the seizure to China’s top party leadership, such a conclusion would be based more on assumptions about decision-making than on currently available information. The relative speedy and non-acrimonious return of the drone suggests that its seizure may have lacked approval, at least at the highest levels.

Nevertheless, regardless of who within the Chinese system authorized the seizure, it sends a clear message of a willingness to challenge the United States’ naval presence in the region. In this way, China may be departing from past practice, which has focused more on verbal and diplomatic warnings and occasional confrontations in areas over which Beijing has claimed some kind of jurisdiction in the South China Sea. China is now apparently willing to engage in direct naval confrontations in waters beyond its jurisdiction in East Asia, underscoring the military competition between the two countries.

M. Taylor Fravel is the Principal Investigator of the Maritime Awareness Project. He is Associate Professor of Political Science and a member of the Security Studies Program at the Massachusetts Institute of Technology (MIT).

Banner Image: © U.S. Department of Defense. Crew members aboard the VOS Raasay recover U.S. and British Royal Navy ocean gliders off the northwest coast of Scotland, Oct. 8, 2016. A similar unmanned underwater vehicle was seized by the Chinese Navy in international waters off the coast of the Philippines Dec. 15.