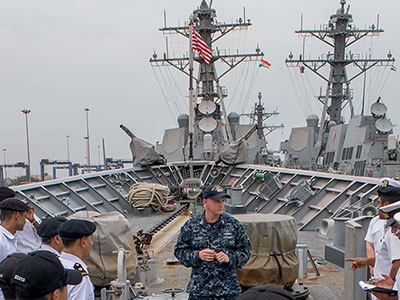 The Geopolitics of the Quad

In the wake of the Quadrilateral Security Dialogue, or Quad, meeting in Singapore on November 15, Arzan Tarapore considers how this informal grouping of Australia, India, Japan, and the United States could mount a response to China’s revisionism.

The Quadrilateral Security Dialogue, or Quad, met again in Singapore on November 15 on the sidelines of the East Asia Summit. An informal grouping of Australia, India, Japan, and the United States, the Quad held its third meeting of officials since it was reformed in November 2017, after a decade-long hiatus. The meeting in Singapore covered a range of security and economic issues under the rubric of supporting a “free, open, and inclusive rules-based order”—in a veiled reference to China’s revisionist policies—and declared the group’s continued deference to “ASEAN centrality” in the region’s institutional architecture. Once again, the group stopped short of announcing any combined military maneuvers or measures that directly push back on Chinese military activities.

How, then, could the Quad mount a response to China’s revisionism? As a strategic dialogue, it does not aspire to become a standing multilateral institution or military alliance; it will not supplant ASEAN or emulate NATO. This commentary argues that the Quad’s most important potential advantage is its geopolitical configuration as a grouping of militarily capable powers on and near the Eurasian littoral that could coordinate national strategies to prevent the emergence of Chinese regional hegemony. Theories of geopolitics offer clues on how the Quad can realize its potential: by reinforcing member countries’ maritime supremacy; ensuring that each, and especially India, remains committed to the current liberal order; and supporting the political independence of other key regional states, especially in Southeast Asia.

China and the Quad: Competing Visions of Order

When the Quad reformed in 2017, its members were motivated to defend their vision of regional order against what they perceived as accelerating Chinese aggression. [1] The leaders of its member countries often refer to their common democratic credentials. While that may be useful for domestic political consumption, the more salient common political value is fidelity to the regional liberal order. This is an order defined—as repeated in successive statements by Quad members—by the territorial status quo, peaceful dispute resolution, freedom of navigation, and freedom from coercion.

China’s aggressive behavior and long-term strategic plans threaten this regional order. Most obviously, China has pressed its territorial claims in the disputed South China Sea through an aggressive program of island-building. Its expansive nine-dash-line claim to the whole sea, emplacement of bases and weapons on these islands, and harassment of other states’ ships, alongside its unilateral declaration of an air defense identification zone in the East China Sea, could lay the groundwork for restricting other countries’ freedom of navigation and overflight in these disputed or international waters. It has also used military force to coerce other claimants such as Vietnam and rejected a neutral arbitration process to settle its dispute with the Philippines.

Over the longer term, China’s strategic plans pose an even greater potential threat to the status quo. Its Belt and Road Initiative (BRI), taking the guise of massive investments in transportation, energy, and telecommunications infrastructure across Asia, Africa, and Europe, has become “the organizing foreign policy concept of the Xi Jinping era.” [2] BRI certainly meets some of the desperate demand for infrastructure development and would doubtless boost regional trade and economic development. But its secretive and predatory deals have bound its partner states with unsustainable financial obligations, empowered corrupt leaders, and sometimes allowed China to claim direct control of critical infrastructure—most famously at Hambantota port in Sri Lanka.

Less obviously, however, BRI conveys China’s strategic ambitions to dominate the Eurasian landmass. Trade and infrastructure projects carry with them people, ideas, and influence. In her definitive analysis of BRI, Nadège Rolland argues that the initiative will endow China with the leverage to shape smaller countries’ policy preferences, strengthen authoritarian rulers against critics, and edge out U.S. and Western influence. [3] With BRI as its foreign policy centerpiece, and through territorial expansion in the South and East China Seas, China seeks to displace the United States as the Indo-Pacific’s preeminent power and build a Sinocentric order at the expense of the prevailing liberal order.

The Quad seeks to answer this challenge. It stands as one among several efforts to gird the existing liberal order, including national strategies such as Japan’s “free and open Indo-Pacific strategy” and multilateral agreements such as the diminished Trans-Pacific Partnership (TPP), which entered into force as the Comprehensive and Progressive Agreement for Trans-Pacific Partnership, or TPP-11. Compared with these initiatives, the Quad has not yet resulted in major resource reallocation or formal structures; rather, the potential advantage of the grouping lies in its geopolitical configuration.

According to the canonical theories of geopolitics, world politics is a contest for a controlling share of the globe’s economic and military power. Three largely contemporary theorists offered different views on how this competition is configured and can be won. Alfred Thayer Mahan, an evangelist for sea power, suggested that the United States and other insular powers, free from immediate threats to their homeland, could ensure a favorable balance of power by simply controlling the global maritime commons. [4] Sir Halford Mackinder, in contrast, argued that the advent of railways would allow central continental powers, such as Germany and Russia, to more effectively unify and control the “heartland” of Eurasia and amass uncontestable power, which they could subsequently project into the oceans. [5] Nicholas Spykman correctly pointed out that Eurasia’s greatest concentrations of demographic and economic power lie not in its relatively empty heartland but instead in the economically productive “rimland” of littoral states, from Western Europe to South and East Asia. For Spykman, therefore, the greatest threat to U.S. and global security comes from a potential hegemon or coalition—be it Germany, Japan, or Russia—seeking to integrate the rimland under its control, which would endow it with unmatched productive potential and uncontested access to the global commons. [6]

In geopolitical terms, China’s rise represents just such a threat. The country is already by far the most powerful rimland state, unencumbered by major land threats on its borders. BRI represents an endeavor that would, if successful, integrate much of Southeast Asia, Central Asia, and Europe—the heartland and rimland of Eurasia—under China’s economic and political influence. Geopolitical theorists like Spykman were writing at the time of World Wars I and II and were concerned primarily about direct military conquest. Now, in a world of nuclear weapons and integrated supply chains, where military conquest is prohibitive and unnecessary, BRI represents the most viable model to project influence, build coercive leverage, and assert de facto control over logistics and the means of production. BRI’s economic and infrastructure deals do not threaten the formal sovereignty of its partners. Instead, as Rolland argues, China’s secretive and predatory methods are designed to constrain their strategic choices and secure the deference of smaller rimland states, from Southeast Asia to Western Europe. BRI’s provision of lucrative economic benefits and its largely, or at least initially, nonmilitary character also serve to reduce resistance to the scheme. China’s rise thus represents the most potent prospect of unified control of the rimland—and thus a hegemon dominating Eurasia—since World War II.

How can the Quad meet this challenge? The grouping has significant potential advantages. Australia, Japan, and the United States are insular offshore powers with the existing military capability and strategic interest in maintaining the liberal status quo in the region’s maritime commons. India is a rimland country whose demographic size, history of conflict with China, and geographic separation across the Himalayas establish it as the primary alternative rimland power and make it naturally resistant to BRI. To realize these potential advantages, the Quad could take cues from geopolitical theory to pursue three lines of effort to prevent the emergence of Chinese hegemony.

First, the Quad members should reinforce their collective maritime supremacy in the international waters and airspace of the Indo-Pacific. Maintaining the liberal status quo of freedom of navigation, buttressed by international law and norms, is critical to both their own security and prosperity and that of the entire region. Through military consultations, Quad members should coordinate the development of complementary capabilities, build a shared and overlapping surveillance and logistics architecture, and plan and exercise for contingencies involving Chinese coercion that threatens freedom of navigation.

Second, the Quad members should ensure that they all remain committed to the liberal order. They already share this common strategic outlook, but the mechanism of regular political consultations should ensure that members are not lured into acquiescing to Chinese strategic plans. This is especially important for India—the Quad’s only resident rimland power and the member most wary of strategic alignments. China will continue its efforts to soften New Delhi’s position and co-opt Indian leaders with the promise of a friendly and profitable relationship. But if India’s regional policy, reinforced by political and military ties to the Quad, remains suspicious of Beijing’s intentions, China will struggle to control the rimland and its adjacent waters.

Third, the Quad should support the security of other rimland states, especially in economically dynamic and strategically vital Southeast Asia. Given that China targets these smaller states through influence and coercion, the Quad should coordinate economic assistance and security cooperation to reduce their vulnerability to Chinese pressure. Indonesia is by far the largest regional state, both demographically and economically, and lies astride some of the region’s most vital maritime chokepoints. This is not an argument to expand the Quad but to prioritize its future activities to support the independence and prosperity of key states like Indonesia—respecting but not relying on the region’s cumbersome ASEAN-centric institutions.

These lines of effort are well-suited to the Quad members’ preference for a gradually deepening process of political and military coordination, without any new formal structures or alliance commitments. The four status quo powers are all militarily capable and well-situated on or near the Eurasian littoral. Given their individual and collective advantages, the Quad can be a useful platform to coordinate members’ strategic policies to prevent Chinese hegemony.

Arzan Tarapore is a Nonresident Fellow at the National Bureau of Asian Research. He was previously an analyst in the Australian Defence Department and holds a PhD from King’s College London. 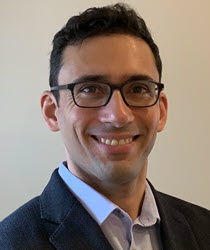