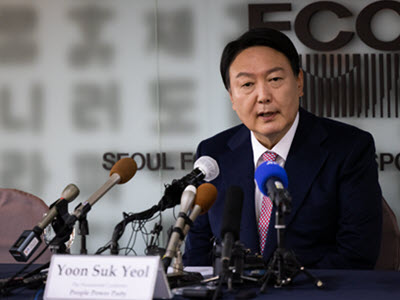 This commentary by Jenny Town is part of the roundtable “The Election of Yoon Suk-yeol and Implications for the United States.”

On March 9, the conservative People Power Party candidate Yoon Suk-yeol prevailed in one of the closest and most divisive presidential elections in South Korean history. Although domestic issues such as soaring housing prices, underemployment, and gender politics dominated campaign discourse and rallied voters, Yoon’s victory is expected to bring about a significant shift in the country’s foreign policy.

For the last five years, Seoul’s foreign policy has been driven by an intense desire to improve inter-Korean relations. President Moon Jae-in made inter-Korean relations his top foreign policy priority, wanting Seoul to be “in the driver’s seat” in changing the security dynamics on the Korean Peninsula. He centered his policy on building a peace regime and pursued high-level engagement with North Korea, eventually pulling the United States into the mix as well. This engineered a summit-driven diplomatic process that worked to transform inter-Korean relations in the short term and move Pyongyang and Washington off the collision course they were on.

However, Moon’s overwhelming focus on North Korea during his tenure and desire to improve relations as a means of reducing tensions and working toward the denuclearization of the Korean Peninsula will not be replicated by the incoming administration. President-elect Yoon’s approach to North Korea falls back on the more mainstream conservative approach, one where North Korea’s “complete and verifiable denuclearization” serves as the basis for improving inter-Korean relations and requires Pyongyang to make meaningful moves down that path first in order for Seoul to re-engage on issues such as economic assistance, sanctions relief, and a peace agreement.

This approach will likely be welcomed by the United States, as it better aligns with the sequencing the Biden administration prefers. This also alleviates pressure from Seoul on Washington to provide unilateral political and peace-oriented incentives to North Korea to create an environment conducive for continued negotiations. Instead, inducements like the end-of-war declaration that the Moon administration had fought hard to broker will come only in response to positive North Korean actions, not as a diplomatic incentive to advance the process.

With North Korea actively testing and advancing its nuclear and ballistic missile programs, however, this return to a hard-line approach is bound to raise tensions on the peninsula in the near term. The resumption and expansion of joint U.S.–South Korea military exercises and power projection in the region will convey a similar message as the “fire and fury” rhetoric during the Trump administration. Furthermore, the ability to build consensus in the international community, especially through the UN Security Council, will be impeded for the foreseeable future by increasing U.S.-China rivalry and the Russian invasion of Ukraine. This means that while the United States, South Korea, and Japan may soon be on the same page on North Korea, the diplomatic tools available will be more limited, and are more likely to fuel tensions rather than lower them.

While President-elect Yoon has acknowledged the importance of dealing with North Korea, he has indicated that this issue will not “represent the whole of Seoul’s diplomacy.” Instead, his top foreign policy priority appears to be strengthening relations with the United States and continuing the transformation of bilateral cooperation into a “comprehensive strategic alliance”—a process that was outlined in the joint statement issued after the Biden-Moon summit in 2021.

In addition to bolstering deterrence against North Korea’s growing nuclear weapons development, Yoon appears to be willing to be clearer about Seoul’s political alignment between Washington and Beijing. He has described “a deeper alliance” with Washington as the “central axis” of his foreign policy strategy, which entails taking a stronger stance with the United States and its allies on the basis of shared values. Key to this transformation is moving beyond military cooperation and expanding economic and technical cooperation.

Yoon has also expressed a willingness to improve relations with Japan, as well as trilateral cooperation among the United States, South Korea, and Japan, to address the broader security environment. It should be noted that cooperation between Seoul and Tokyo is usually easier to broker when Pyongyang is actively testing nuclear and missile systems, especially at the pace it is doing so today. However, the sustainability of that cooperation will certainly be challenged by historical disputes and nationalist sentiments when North Korea’s testing abates.

In this evolving security environment, communication and exchange at all levels of society between the United States and South Korea will be important for increasing understanding of how Seoul is both perceiving and evaluating its strategic choices. Fostering greater alliance cooperation and solidarity will inevitably be met with resistance and pressure from states like China and North Korea. Contingency planning for what can be done to increase political and economic support in the case of coercive actions against Seoul for alliance decisions is needed to increase the sustainability of this transformation. Increasing economic and supply chain cooperation is part of that equation, but it is a long-term process. Short-term measures could range from strong political statements from U.S. and allied leaders condemning the coercive actions, to congressional members urging their constituents to support South Korean businesses and products, especially in industries targeted, to help demonstrate solidarity and mitigate potential economic losses due to alliance-based decisions.

Moreover, as an arms race accelerates in Northeast Asia and strategic competition is catalyzing the re-formation of political and ideological blocs, the regional security situation is becoming more dangerous and unpredictable. To mitigate these trends, greater efforts are needed now to facilitate dialogue with regional stakeholders that help identify the various motivations driving this escalation. This may be done in the form or bilateral or multilateral talks and exchanges among policymakers, experts at think tanks, and academics, focused on opportunities for arms control and nuclear risk reduction initiatives to avoid conflicts that could disrupt or even paralyze this dynamic region.

Jenny Town is a Senior Fellow at the Stimson Center and the Director of Stimson’s 38 North Program.

The Election of Yoon Suk-yeol and Implications for the United States: An Alliance-First Approach to North Korea
This site uses cookies. Please read our Privacy Policy to learn how and why we use cookies.