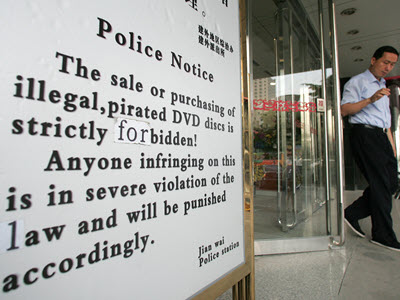 Beijing, CHINA: A man walks out of a department store past a sign warning against the sale of illegal and pirated DVD’s, 08 June 2006 in Beijing. Intellectual property rights have been a key focus of European Trade Commissioner Peter Mandelson’s trip and he again emphasized the need for speedy improvement from Beijing and called for better protection of European innovation. Piracy of films and music remain rampant in China despite its membership into the World Trade Organisation (WTO) in December 2001. AFP PHOTO/Frederic J. BROWN. (Photo credit should read FREDERIC J. BROWN/AFP via Getty Images)