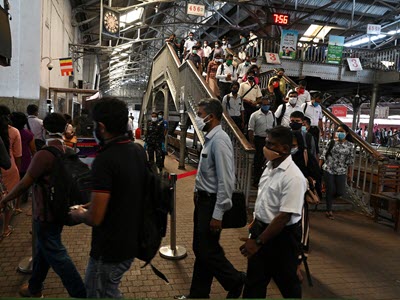 The Covid-19 Pandemic and the Power Rivalry in South Asia

Bhagya Senaratne assesses the effects of the Covid-19 pandemic on South Asia and considers the implications for regional states amid escalating Sino-U.S. competition. This essay continues the expansion of the New Normal in Asia series to include the voices of emerging scholars and analysts in both the United States and the Indo-Pacific.

For decades, South Asia has been plagued by weak governance systems and healthcare facilities that do not reach the masses who need them the most. One of the chief obstacles to addressing these issues is the animosity between the region’s strongest powers, India and Pakistan. Additionally, South Asian politics have been complicated by external realities, such as bloc politics during the Cold War, the fight against terrorism, and more recently the escalation of Sino-U.S. competition.

In 2020, at a time when the entire world is battling the pandemic caused by the Covid-19 virus, South Asia has been further destabilized by the skirmish between India and China in the Galwan Valley. The smaller states that are increasingly dependent on health and economic assistance also have faced the added pressure of navigating the U.S.-China rivalry as high-level U.S. and Chinese officials made visits to the region in recent months. Accordingly, this essay considers the implications of the Covid-19 pandemic for South Asia and the future of power rivalry in the region.

THE PUBLIC HEALTH CHALLENGES OF THE PANDEMIC FOR SOUTH ASIA

Of the eight countries in the South Asian Association for Regional Cooperation (SAARC), Afghanistan, Bangladesh, and Pakistan were the hardest hit at the outset of the pandemic. India was also severely affected, recording the second-highest daily average of Covid-19 cases in the world. On the other hand, Sri Lanka, which initially controlled the virus, is currently experiencing a second wave, with approximately four hundred cases being identified daily. Moreover, the governments of Bangladesh, Nepal, and Pakistan are facing a similar fate, as spiking infection rates force them to impose stricter measures to try to contain the spread of the virus.

Two prominent barriers have constrained the response to the pandemic across the region. First, some of the restrictions imposed are not practical due to the lack of adequate healthcare facilities and sanitation in many places. According to the UN Human Development Report, Sri Lanka is ranked the highest in the region at 72 with a score of 0.782. The country has thus far managed to provide care for those reported to have contracted Covid-19, resulting in a very high recovery rate. However, there are reports from elsewhere in the region that indicate people have died either at their residences or en route to the closest hospital because they were unable to access required healthcare in time.

This lack of adequate hospitals and healthcare workers is particularly a problem in rural areas, where best practices such as regularly washing hands prove to be difficult because of limited access to tap water. In some cases, families must walk miles to collect pots of water for their daily consumption. In areas such as these, regular showering or even hand washing is unheard of and proves to be impractical. Therefore, one serious challenge the region as a whole and individual countries face in limiting the spread of Covid-19 is to expand access to healthcare facilities and services as well as to increase access to sanitary facilities that would improve daily hygiene.

A second, related barrier is the large numbers of people in South Asia living under the poverty line and in very crowded conditions. Similar to access to healthcare and sanitation, Covid-19 has highlighted how grossly dissimilar living conditions are for various segments of the region’s population. In some cases, families with more than five members live in a single-room house, making isolation and quarantine protocols impossible to follow. Under such conditions, the spread of diseases is inevitable, and the less privileged who cannot afford to live in bigger houses are affected the most.

“The guidelines imposed to improve hygiene and sanitation have placed a burden on the economies of individual states and the South Asian region as a whole. As a result, countries have taken action to keep their economies afloat.”

THE IMPLICATIONS FOR POWER RIVALRY IN THE REGION

These two health barriers highlight the vulnerability of the economies in the region to the pandemic. The guidelines imposed to improve hygiene and sanitation have placed a burden on the economies of individual states and the South Asian region as a whole. As a result, countries have taken action to keep their economies afloat. Sri Lanka, for example, has restricted imports of all nonessential items in an attempt to stabilize the economy and avoid an adverse balance of payments.

To address economic challenges, many regional states have relied on external assistance, particularly from China and the United States. In the case of Sri Lanka, both countries have assisted with medical supplies during the pandemic and have pledged further support. The United States, for instance, committed $5.8 million to Sri Lanka by May 2020 and thereafter donated 200 ventilators through the U.S. Agency for International Development (USAID). By mid-2020, China had donated its third batch of medical aid, “including 30,000 PCR testing kits, 30,000 disposable coveralls, 30,000 medical protective face masks, 600,000 surgical masks, and 30,000 medical goggles.” China additionally granted $90 million in early October 2020.

The scale of Chinese assistance since the onset of the pandemic has reinforced the insecurities that India and the United States have regarding the increased engagement by China in countries such as Maldives, Pakistan, and Sri Lanka. Thus, the emerging trend whereby the United States and India are partnering with one another to counter China’s activities has continued. This was highlighted when India banned Chinese mobile applications and canceled infrastructure projects that had been awarded to China. The visit of the U.S. secretaries of state and defense to India in October, during which the two countries agreed to increase defense and security collaboration, among other areas, amplified the improvement in bilateral relations.

In addition, both India and the United States have expanded their engagement with regional states, especially Maldives and Sri Lanka. A prominent example is the visit of U.S. Secretary of State Mike Pompeo to these two island-states in October—in the midst of a global pandemic with limited overseas travel—and the subsequent commissioning of the U.S. Embassy in Maldives.

From the perspective of the small states in the region, the increased presence of China to provide economic assistance and counterbalance Indian dominance in the extended Indian Ocean region is identified as being a positive outcome of the power rivalry between China, India, and the United States. This means that small countries like Bhutan, Maldives, Nepal, and Sri Lanka have better chances of negotiating agreements or services, as they have the ability to hedge between powers. The government of Sri Lanka, for example, has indicated that it will continue to practice the principle of nonalignment and proceed to interact with these three countries based on interests and issues. This suggests that smaller states of South Asia will no longer follow the concept of “permanent friends” but instead practice a policy of “permanent interests.”

“In comparison with India or the United States, China is making more tangible and timely commitments to regional countries affected by Covid-19.”

China appears to be making gains in South Asia during the pandemic by committing high levels of medical assistance and even discussing steps for long-term economic revival with four South Asian states (Sri Lanka, Bangladesh, Nepal, and Pakistan). China is also committed to increasing tourism in the region. In comparison with India or the United States, China is making more tangible and timely commitments to regional countries affected by Covid-19. Such assistance is welcomed by these states as a counterweight to Indian assistance, as it makes these countries less dependent on their larger neighbor.

The pandemic has also exposed the limitations of SAARC. This regional governance organization has historically been hindered by the rivalry between India and Pakistan. Whether SAARC would be able to withstand the pressures of the heightened power rivalry involving China is questionable, as there is inadequate consensus within the organization for it to formulate region-wide policies. While the recent online gathering on the sidelines of the UN General Assembly is a positive development, there is much to be desired of the organization for it to be considered as truly promoting South Asian interests. The trust deficit between India and Pakistan has hindered economic integration, India’s hegemonic status still dominates regional requirements, and the region’s lack of infrastructure development hampers regional connectivity. In short, the pandemic has provided no reason to believe that SAARC will be any more effective in the future.

The lack of an organization to represent the region’s interests means that countries must navigate the power rivalry on their own, as opposed to as a regional unit. Thus, it can be concluded that the pandemic is negatively affecting the region not only in terms of the disease but also in terms of geopolitics.

One notable risk is that the region’s smaller states could be further embroiled in the power rivalry while attempting to maximize its benefits in their favor. Even though Chinese and U.S. assistance is beneficial in the immediate future, there are questions as to whether these states will over-rely on the external powers. There is a possibility that smaller states will attempt to rely on external powers for longer-term assistance as it is evident that they will not receive sufficient support from within the South Asian region. Whether this dependence on economic assistance would be limited to the United States and China is uncertain, as other countries too have demonstrated their interest in South Asia and the Indian Ocean. Therefore, smaller states must be conscious of their sovereign rights while also paying attention to the geopolitical concerns that have been amplified during the pandemic.

Bhagya Senaratne is a Lecturer in the Department of Strategic Studies at the General Sir John Kotelawala Defence University in Sri Lanka. She was awarded a PhD from the University of Colombo for her research titled “An Analysis of Sri Lanka–China Bilateral Relations from 1994 to 2015.” Dr. Senaratne researches and teaches on areas related to diplomacy, strategic communication, Sri Lanka–China relations, foreign policy, maritime security, and nontraditional security challenges.

Embassy of the People’s Republic of China in Sri Lanka, “Amid the Second Wave, Regional Countries Discussed on COVID-19 Response via Video-Link,” November 11, 2020, http://lk.china-embassy.org/eng/xwdt/t1831592.htm. 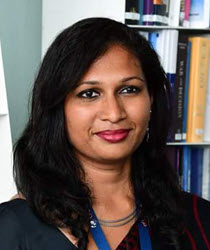