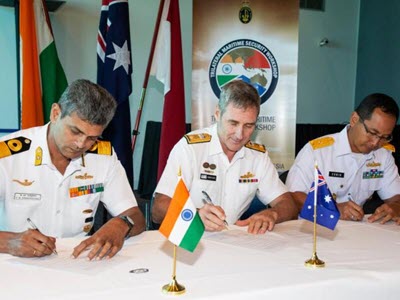 Jagannath Panda describes the development of the Australia-India-Indonesia trilateral as a middle-power maritime coalition and examines the value the grouping brings to existing trilaterals in the region to better balance great-power rivalry in the Indo-Pacific.
.

The Australia-India-Indonesia (AII) trilateral is an example of how the power structure in Asia has become multipolar. Conceived formally in Bogor in 2017, the AII has gradually progressed through senior-level meetings held in Canberra in 2018 and New Delhi in 2019. The grouping adds to the existing trilaterals in the region, such as the Japan-U.S.-India, Australia-India-Japan, and recent Australia-France-India groupings. The AII also complements the Quad (comprising Australia, India, Japan, and the United States), which has become a pragmatic mode of multilateral cooperation in the Indo-Pacific.

Considering the myriad such groupings in the region, this essay examines what value the AII brings to the fold. Ultimately, how can this grouping of three important maritime democracies shape a credible middle-power coalition in the Indo-Pacific focused on strengthening regional resilience in an era of great-power politics?

Despite the definitional uncertainties of a middle power, Australia, India and Indonesia can capitalize on their increasing status as middle powers to strengthen the regional economic-security architecture. In the maritime domain, India forms a fulcrum within the AII framework, given its “Shared Vision for Maritime Cooperation in the Indo-Pacific” with both Australia and Indonesia.[1] The trilateral can thus build on common interests like a “rules-based maritime order,” “respect for sovereignty and international law,” “robust economic growth and prosperity,” and an “inclusive Indo-Pacific region” through a joint focus on strengthening maritime infrastructure and connectivity. Essentially, the development of the AII as a middle-power maritime coalition that cooperates on common strategic interests—like the shared concerns of the three states vis-à-vis rising Chinese belligerence—while acknowledging economic dependence on China and security expectations from the United States can allow Australia, India, and Indonesia to better balance great-power rivalry in the Indo-Pacific.

The AII trilateral developed from the outlook that Australia, India, and Indonesia share for maritime Asia. For instance, barring a technical issue involving a resource-rich part of Indonesia’s exclusive economic zone (EEZ) that falls within China’s nine-dash line claim, all three states are nonclaimant countries in the South China Sea disputes and are primarily tertiary stakeholders to the conflict. India and Australia also have critical resource, energy, trade, and security interests that are threatened by the territorial disputes in the South China Sea. Their unique position with respect to the disputes—coupled with their regional prowess as strong maritime democracies that smaller states can look to for leadership—allows the AII countries to demand respect for the rule of law and freedom of navigation. In other words, the trilateral could essentially become a middle-power nexus for the South China Sea disputes, ensuring that any outcome is in keeping with the spirit of a maritime Asia, upholds international norms, and protects the commercial and security dependence of the Asian states on the sea amid Chinese maritime assertions.

Indonesia holds major geographic jurisdiction over maritime chokepoints such as the Malacca Strait, Sunda Strait, and the Six Degree Channel. The Malacca Strait is the main shipping lane connecting the Indian and Pacific Oceans and falls under Indonesian sovereignty (alongside Singaporean and Malaysian governance). The Sunda and Lombok Straits—alternative sea lanes to the Malacca Strait—are located completely within the Indonesian archipelago. In close proximity to Australia, the Lombok and Malacca Straits are invaluable waterways to international and especially Australian trade. Given such geographic proximity, the AII trilateral must encourage more dialogue on maritime cooperation, including fisheries and freedom of navigation. In addition, the Six Degree Channel could emerge as a priority for trilateral strategic collaboration among the three countries, with India taking on a leading role through its Act East policy. India has been working with Indonesia to develop a seaport in Sabang—close to the Andaman and Nicobar Islands and northern part of the Malacca Strait.[2] The inclusion of other partner states like Australia and Japan could further increase the port’s strategic value.

Securing sea lines of communication and maintaining freedom of navigation are central to national security for all three countries, making them natural maritime partners. Maritime exercises have already progressed well bilaterally, with exercises between Australian and India, Australia and Indonesia, and India and Indonesia. The AII trilateral must further promote such bilateral cooperation, possibly through the initiation of a trilateral maritime annual exercise focused on chokepoints in the Indian and Pacific Oceans. Such overtures would help build regional resilience and provide smaller littoral states with opportunities for economic and security collaboration via third-country cooperation, led by the trilateral.

Politically, too, the AII can find a crucial place in the key foreign policy ambits of the three states: India’s Act East policy, Australia’s Pacific Step-up, and Indonesia’s Global Maritime Fulcrum. At their core, these policies are all centered on economic, security, and diplomatic outreach with states in the Indo-Pacific—particularly those in Southeast Asia—and can, therefore, find synergy with each other.

In terms of economic development—an area that has emerged as a focal point for many minilateral and multilateral initiatives in the region—the AII trilateral can find opportunities to collaborate with other ventures on constructing new infrastructure. It could collaborate, for instance, with Japan’s Expanded Partnership for Quality Infrastructure. Prime Minister Yoshihide Suga visited Jakarta during his first official tour abroad amid the pandemic, highlighting Indonesia’s growing importance in Japan’s Indo-Pacific strategy. Japan also shares close, comprehensive partnerships with India and Australia, bilaterally as well as trilaterally. Therefore, Japan could be a vital partner for the AII trilateral—potentially even opening doors for a new type of Quad grouping between the four middle powers. As Indonesia looks to modernize its supply chains, for example, it could emerge as a partner within the Supply Chain Resilience Initiative led by Australia, India, and Japan. Although Indonesia has maintained steady growth over the past decade, it could see accelerated growth under the initiative as value chains migrate southward from China. Conversely, Indonesia’s massive market would make the country a valuable addition.

Although Australia, India, and Indonesia all share deep-rooted economic links with China, they remain skeptical of Beijing’s growing political clout in the region and increasingly aggressive behavior. Even as they remain members of China-backed institutions, such as the Asian Infrastructure Investment Bank, their deteriorating ties with China and commitment to a rules-based regional order have made these countries seek alternatives to Chinese investment. The AII could be a means for balancing China’s influence in the region. For instance, the trilateral could consider a joint strategy for promoting regional infrastructure, connectivity, and capacity-building initiatives among the three countries or with other like-minded initiatives, such as the Blue Dot Network led by Australia, Japan, and the United States.

To this end, the AII must deepen its focus on India’s Indo-Pacific Oceans Initiative, which formed a central point of discussion in the third dialogue in 2019. First introduced by Prime Minister Narendra Modi at the 14th East Asia Summit, the initiative aims to maintain the security and stability of the Indo-Pacific’s maritime domain. Successful implementation will require an integrated approach in collaboration with regional partners such as the United States, South Korea, and Australia; trilateral groupings; and the Quad. In other words, to achieve its objective of a secure maritime region, the Indo-Pacific Oceans Initiative must be based on international cooperation. Through such interaction with minilateral groupings, as well as states bilaterally, the initiative can become a cooperative and inclusive venture. In particular, the AII and Indo-Pacific Oceans Initiative could come together under a plurilateral mode of engagement to jointly address traditional and nontraditional security concerns. The multilateral tone of the initiative could be further enhanced with Indonesia’s inclusion in the emerging Quad-Plus structure. This platform has enabled discussion surrounding domestic challenges during the Covid-19 pandemic, diplomatic maneuvering in the new regional and global dynamics, and economic policies for recovery.

In conclusion, the AII is perfectly positioned to emerge as a key regional trilateral mechanism in the post-pandemic order. It can stand as a middle-power initiative in the face of the great-power pressure and heightened Chinese aggression that threaten regional security and stability. Strategic convergence under the trilateral thus could be a pillar for protecting middle-power economic and security interests. In other words, a fully developed Australia-India-Indonesia trilateral could be an expedient mode of multilateral cooperation in the Indo-Pacific.

Jagannath Panda is a Research Fellow and Centre Coordinator for East Asia at the Manohar Parrikar Institute for Defence Studies and Analyses in New Delhi. Dr. Panda is the Series Editor for Routledge Studies on Think Asia.

[1] See “Joint Declaration on a Shared Vision for Maritime Cooperation in the Indo-Pacific between the Republic of India and the Government of Australia,” available at https://www.dfat.gov.au/geo/india/Pages/joint-declaration-shared-vision-maritime-cooperation-indo-pacific-between-republic-india-and-government-australia; and “Shared Vision of India-Indonesia Maritime Cooperation in the Indo-Pacific,” available at https://www.mea.gov.in/bilateral-documents.htm?dtl/29933/Shared_Vision_of_IndiaIndonesia_Maritime_Cooperation_in_the_IndoPacific.