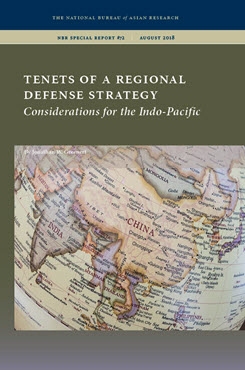 Tenets of a Regional Defense Strategy
Considerations for the Indo-Pacific

Of the security concerns in the Indo-Pacific, the challenges are particularly acute in five current hotspots: the Korean Peninsula, the East China Sea, the South China Sea, the India-Pakistan border, and the Taiwan Strait. As the U.S. refines campaign plans in accordance with the National Security Strategy and the classified National Defense Strategy, it is essential that commanders and planners understand the diverse impact of the influence associated with the key players. This diversity is rooted in different levels of national power, approaches to strategic culture, and understandings of national security strategies.

Admiral Jonathan W. Greenert holds the John M. Shalikashvili Chair in National Security
Studies at the National Bureau of Asian Research. At NBR, Admiral Greenert informs
debates on critical issues in the Asia-Pacific through briefings to congressional members, military,
media, and administration officials; meetings with senior-level counterparts in Asia; and research,
speaking, and writing. Prior to joining NBR, he served as the 30th chief of naval operations from
2011 to 2015.