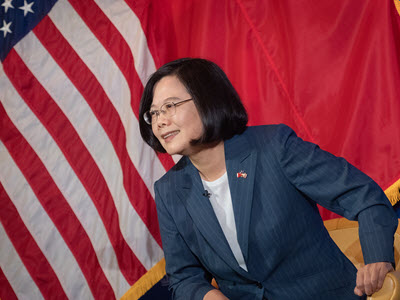 Makoto Lin / Office of the President

Vinod K. Aggarwal examines Taiwan’s efforts to diversify its trade policy away from China, particularly its focus on securing a bilateral free trade agreement with the United States.

Over the last two decades, Taiwan’s trade and investment with China has increased dramatically. At the same time, China has become more hostile toward Taiwan, raising concerns by Taiwanese leaders about the risks of this growing economic interdependence. Under President Tsai Ing-wen, Taiwan has sought to reduce this perceived excessive dependence on China.

This commentary focuses on Taiwan’s broader diversification strategies and in particular on its trade policy toward the United States. The first section looks at Taiwan’s efforts to diversify its trade policy away from China and toward Southeast Asia, while also considering the steps Taiwan has taken to increase its competitive position in supply chains. I then focus on Taiwan’s efforts to secure a bilateral free trade agreement with the United States, particularly in the context of the incoming Biden administration.

The U.S.-China trade war has pushed Taiwan to diversify its trade policy away from China. This effort, of course, is not only due to the trade war. Prior to the Trump administration, Taiwan had already been strengthening its ties with South and Southeast Asia. Under President Tsai Ing-wen, for example, Taiwan created the New Southbound Policy in September 2016 “to diversify its economy and reduce reliance on China, its main trading partner.”[1] Prior to that shift, Taiwan’s exports to China had risen rapidly, particularly from 2000 to 2010, before stabilizing and growing much more slowly and in some years even declining.[2] Taiwan’s exports and investments to Southeast Asia also rose significantly as a result of the New Southbound Policy.[3]

In January 2019, Taiwan launched a reshoring effort in response to the U.S.-China tariff war. It encouraged firms to repatriate existing foreign investment as well as new investment to Taiwan. By September 2020, a year and a half after the reshoring initiative was released, Taiwanese companies had reinvested an additional $38 billion in Taiwan under the government program.[4]

The Covid-19 pandemic has complicated these reshoring efforts, as exports to China increased by 10.3% from January to May 2020 while exports to the countries under the New Southbound Policy dropped the most in the last ten years.[5] This trend is likely driven by China’s comparatively rapid recovery, so it remains to be seen how successful the effort will be.

Other shifts in Taiwan’s trade and foreign policy include a focus on strategic industries, such as semiconductors and information technology, in order to retain a central role in global supply chains following the U.S.-China trade war and the Covid-19 pandemic. Anticipating a transformation of global supply chains, President Tsai emphasized the development of six strategic industries in her May 2020 inaugural address. She seeks to forge closer international ties in these sectors and “transform Taiwan into a critical force in the global economy.” These industries include biotech and medical technology, national defense and strategic industries, and renewable energy technologies.[6] This may fit well with the United States’ efforts to redirect its supply chains away from China in key industries.

A key Taiwan government policy has been its efforts, spanning two decades, to secure a bilateral free trade agreement (FTA) with the United States. Below, I identify several reasons why an FTA has not been concluded yet, before turning to prospects for an accord under the Biden administration.

The biggest sticking point has been U.S. demands that Taiwan reduce barriers to pork and beef imports before beginning trade talks. Taiwan’s long-standing protectionism was clearly driven by domestic interests that had lobbied the government aggressively for import restraints.[7]

Third, the United States began to more aggressively pursue FTAs only after 2001, following earlier FTAs with Israel and Canada.[10] The partners it chose were in the Middle East (Oman and Bahrain) and were seen to be pursued for strategic value. Subsequent FTA partners were chosen based on a mix of economic and strategic factors, but the United States’ concerns over jeopardizing its relationship with China precluded Taiwan from consideration. Since the United States and China established diplomatic relations in 1979, which led to the derecognition of Taiwan, the United States has maintained a one-China policy under both Democratic and Republican administrations. Even the Trump administration, despite many provocative actions toward allies and potential adversaries alike, continued this long-standing policy.

How have these factors changed, and what are we likely to see under a Biden administration? First, on the issue of import restraints, in August 2020 President Tsai removed long-standing barriers to beef and pork imports. This action appears to have been driven by Taiwan’s desire to curry favor with agricultural interests in the United States to increase support for a bilateral FTA.[11] Taiwan is also strengthening ties to the United States through outbound investment. The Taiwan Semiconductor Manufacturing Company, for example, recently announced that it will spend “$12 billion on a new fabrication plant in Arizona.”[12]

Second, the Biden administration is unlikely to revive U.S. participation in the highly controversial TPP (now the Comprehensive and Progressive Agreement for Trans-Pacific Partnership, or CPTPP). Politically, the TPP became a political football for candidate Trump in 2016 to attack the Obama administration and the Hillary Clinton campaign. With the sharp partisan divide continuing, there appears to be little appetite in the incoming Biden administration for the United States to join the CPTPP. It also appears unlikely that Taiwan will be able to join the CPTPP without U.S. support, although this remains a possibility. Another possibility is that the recent conclusion of the Regional Comprehensive Economic Partnership (RCEP) might spur the United States to revive its participation and join the CPTPP. But for the near future, the United States will focus domestically on a green recovery of its economy rather than trade agreements.[13]

Third, the Biden administration is unlikely to push to negotiate FTAs with any country. If Taiwan hopes to get an FTA, little is likely to happen for at least a couple of years. A U.S.-Taiwan FTA will depend on the Biden administration’s evolving relationship with China. The Trump administration’s protectionist policies to push China to further open its market and protect intellectual property have helped Taiwan. This probably accounts for the bipartisan effort of 50 U.S. senators (42 Republicans and 8 Democrats) in October 2020 that called on the U.S. trade representative, Ambassador Robert Lighthizer, to open negotiations on an FTA with Taiwan.

Many countries, particularly in the Asia-Pacific, have found themselves increasingly dependent on the Chinese market over the last two decades. Given China’s rapid economic growth, the lure of the Chinese market has proved irresistible to businesses around the world. Yet, with growing dependence on China, many countries have recognized that the Chinese government is quite willing to engage in economic statecraft to pressure them on political issues.[14] In this context, I have examined Taiwan’s recent efforts to diversify its trade and investment away from China and to increase its engagement with the United States.

Taiwan has sought to encourage its firms to move away from China. Since 2016, it has encouraged greater investment in Southeast Asia through its New Southbound Policy. Since 2019, its reshoring policy has encouraged firms to bring existing and new investment to Taiwan’s economy. And as part of an effort to increase its competitiveness, Taiwan has sought to push its firms to engage in industrial upgrading to ensure that they remain key players in global supply chains.

Although trade agreements are typically seen as purely economic accords to bolster mutual gains, they are clearly often strategic and political.[15] Over a period of two decades, Taiwan has sought an FTA with the United States, in part to ensure that the United States will continue its political support for Taiwan. Under the Trump administration, growing U.S.-China tensions increased the prospects of such an accord. At the same time, such tensions have increased the possibility of regional conflict that could prove detrimental to Taiwan.

Under the Biden administration, new FTAs do not appear to be likely with any country in the near term. Yet growing tensions with China could lead to a change in this policy and more support for Taiwan, including a bilateral FTA. Growing tensions in the region with China would be a mixed blessing for Taiwan, as it continues to be forced to walk a tightrope.

Vinod K. Aggarwal is Travers Family Senior Faculty Fellow and Professor in the Travers Department of Political Science, Affiliated Professor at the Haas School of Business, and Director of the Berkeley Asia Pacific Economic Cooperation Study Center at the University of California, Berkeley.

[9] Bush, “Taiwan and the Trans-Pacific Partnership: The Political Dimension.”

[12] Kurt Tong, “Now Is the Right Time for a Trade Agreement with Taiwan,” Center for Strategic and International Studies, May 27, 2020, https://www.csis.org/analysis/now-right-time-trade-agreement-taiwan.