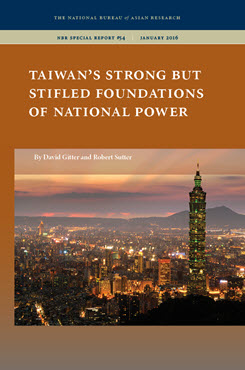 This report examines the key factors underpinning the size, nature, and resilience of national power in Taiwan and draws implications for cross-strait relations.

China’s ever-growing influence poses a threat to Taiwan’s economy, national defense, and international position. Although Taiwan’s prosperity depends heavily on trade with and investment from China, the island is under constant threat from more advanced Chinese military forces. It relies on the United States to counter China’s buildup and deter a military attack or coercive pressure. In addition, Taiwan’s vibrant economy, improving military capacity, and effective diplomacy toward China, the United States, and others have helped the island advance its influence and secure critical needs. Its biggest weakness in dealing with the massive constraints from China is the partisan divide between the two major political parties: the Kuomintang (KMT) and Democratic Progressive Party (DPP). This divide is deeply rooted, having endured now for almost 30 years, and has undermined the government’s ability to set and implement effective policies to deal with Taiwan’s precarious situation.