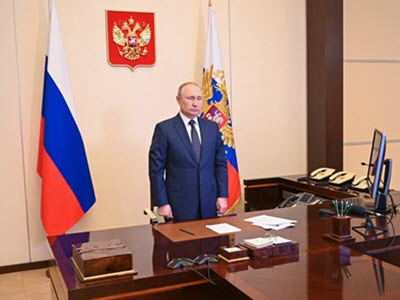 In this episode of Asia Insight, NBR executive vice president Michael Wills speaks with Marcin Kaczmarski, author of the chapter “Russian Foreign Policy in a Time of Rising U.S.-China Competition” (Strategic Asia 2021–22), and Elizabeth Wishnick, author of “Russia and the Arctic in China’s Quest for Great-Power Status” (Strategic Asia 2019), about Russia’s invasion of Ukraine. This podcast was recorded on March 3, 2022.

Marcin Kaczmarski is a Lecturer in Security Studies in the School of Social and Political Sciences at the University of Glasgow in Scotland.

Elizabeth Wishnick is a Professor of Political Science at Montclair State University in New Jersey. She is currently on leave for a year as a Senior Research Scientist at CNA.

[1:48] What do you think Russia is trying to achieve in Ukraine and what are Vladimir Putin’s strategic objectives?

[4:27] Is the ideological challenge of Ukraine increasing alignment with Europe and democratizing more significant than Russia’s stated aim of preventing Ukraine’s NATO membership and the security challenge Russia faces from a Ukraine-NATO alliance?

[9:00] How is China viewing the current situation involving Russia’s invasion of Ukraine, and how might Xi Jinping view the invasion in terms of China’s objectives?

[15:38] How might popular discontent among the Russian public and elite play out if international pressure on Russia remains strong in the coming weeks and months?

[22:42] If the war drags on and the costs to Russia remain very high, can you imagine a scenario in which other leaders may emerge from the Russian people?

[24:20] What lessons are the national security establishment in China learning from Russia’s invasion and the resistance from the Ukrainian army and population?

[31:53] Does China face a choice between doubling down on its friendship with Russia at the risk of potentially being more isolated from the rest of the world? If so, what does that mean for the Russia-China relationship?

[35:35] How can Putin and his inner circle say that they are making steps to restore Russia’s traditional role as a great global power, while being the junior partner in a China-Russia relationship?

[40:22] Is this an opportunity for China to deepen its energy ties with Russia and influence over Russia’s energy sector as Western companies withdraw? Furthermore, how does Beijing deal with the dilemma of its own equities being put at risk if an international sanctions regime on Russia begins to have spillover effects, due to Beijing’s support of Russia and Russian companies as the invasion unfolds?

[46:06] How is the Russian invasion of Ukraine affecting the strategic calculations being made in Northeast Asia, Central Asia, and Northeast, Eastern, and Central Europe?