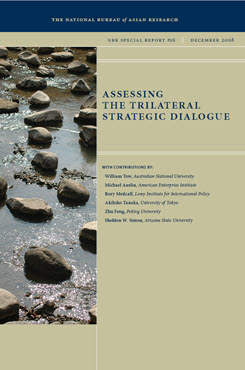 From NBR Special Report no. 16

In response to changes in the Asia-Pacific region, including the rise of China and nontraditional security threats, U.S. strategic thinking has begun to look beyond the traditional hub-and-spoke model of post-war U.S. alliances. Washington has joined Canberra and Tokyo in a dialogue designed to focus their bilateral relationships on joint regional concerns. Initiated in 2005, the TSD agenda has remained focused on more narrowly defined security concerns, including maritime security, nonproliferation mechanisms, counterterrorism, and missile defense. At a minimum, the U.S. is pushing for the enhancement of information exchange on these issues as well as for sharing strategic assessments with Japan and Australia in order to have similar regional pictures. Engaging Japan in TSD discussions over common threats and common responses can serve to help further refine the goal of globalizing the U.S.-Japan alliance, as seen in TSD-initiated joint military exercises held among the three countries.