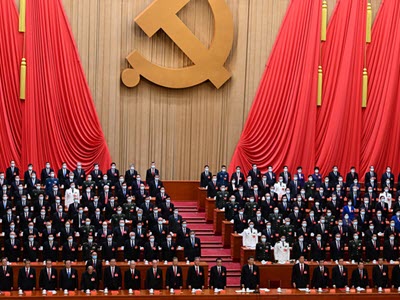 William McCahill has been a long-time member of NBR’s Board of Advisors. Before joining NBR, he worked in Hong Kong and China in international finance, and before that had a 25-year Foreign Service career, including diplomatic postings in Hong Kong, Taiwan, and Beijing, and culminating as chargé d’affaires at the U.S. Embassy in Beijing from 1996 to 2000.

Nadège Rolland is Senior Fellow for Political and Security Affairs at NBR. Her research focuses on China’s domestic, foreign, and defense policy and grand strategy. Her NBR publications include China’s Eurasian Century? Political and Strategic Implications of the Belt and Road Initiative, “China’s Vision for a New World Order,” and “A New Great Game? Situating Africa in China’s Strategic Thinking.

[2:34] In the Work Report to the 20th Party Congress, Xi Jinping laid out the party’s continued advances toward national rejuvenation and socialist modernization. What struck you as most interesting in his remarks, and what does that suggest about Xi’s strategic priorities and concerns for China in the years ahead?

[7:00] Does this congress mark a change with the way the Xi described China’s challenges looking forward?

[10:40] For the last ten years, China’s intentions of peaceful development have contradicted its growing international assertiveness and wolf-warrior diplomacy. Given the emphasis on security and struggle in the Work Report, is Beijing released from having to balance its words and actions now that they align, and will we see the continuation of a more assertive foreign policy?

[14:42] Tell us about these new Politburo Standing Committee members, and whether they embody the idea that China is under threat by numerous external forces. What are their backgrounds and relationships with Xi Jinping, and what kind of guidance will they offer to him?

[22:36] Given that the Politburo Standing Committee is now Xi’s handpicked group, what will the other party factions do? Have they lost all their power, or are they able to bide their time and take advantage of future turmoil?

[28:56] With regard to parts of the party that were inclined to openness, external engagement, and liberalization, does this congress mark the end of the CCP’s ability to pursue that kind of interaction with the world outside China?

[34:32] During the congress, Xi mentioned the threat of Taiwan separatism, challenges of external interference over Taiwan, and inclusion of the phrase “opposing Taiwan separatism” in the party constitution. What does this reveal about China’s true intentions toward Taiwan and issues of separation and unification in coming years?

[41:03] Xi emphasized the need for economic self-reliance, minimizing exposure to the West for economic growth and innovation in the future, as well as the continued policy of “common prosperity.” What are your thoughts on how Xi and the new Politburo Standing Committee will approach China’s economic and social challenges?

[48:38] Looking ahead at the issue of China’s domestic security, what do you think the outlook for domestic social and political stability is within the country?

[53:07] As we are five months away from the National People’s Congress, are there any indicators that you are looking for that will help answer questions about where the CCP and China are headed?

This podcast was edited by Chelsea Zhang at NBR.