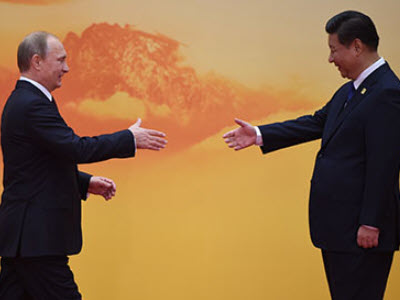 Robert Sutter on Axis of Authoritarians: Implications of China-Russia Cooperation

In this episode of NBR’s Asia Insight, NBR president Roy Kamphausen speaks with Robert Sutter, co-editor with Richard Ellings of the book Axis of Authoritarians: Implications of China-Russia Cooperation, about the dynamic between China and Russia, Russia’s aggressiveness toward Ukraine, and China’s provocations against Taiwan.

Robert Sutter is Professor of Practice of International Affairs at the Elliott School of George Washington University.

Roy Kamphausen is President of the National Bureau of Asian Research.

[1:49] Dr. Sutter reviews some of the critical findings of the 2018 publication from the NBR project “Strategic Implications of China-Russia Relations” (on which he was principal investigator) in light of trends since then.

[6:28] Mr. Kamphausen comments on the central finding that it was the shared observation on both China and Russia’s part that the West, and the United States in particular, was weak that was the gravitational pull in the relationship.

[7:00] Dr. Sutter notes that putting the causal relationship in the right order has a bearing on the kind of countermeasures that you take.

[7:30] Dr. Sutter describes how the research team gradually came to understand that the dynamic between China and Russia is that of two authoritarian powers looking out for their interests and expanding their power in ways that were detrimental to U.S. interests.

[12:08] Mr. Kamphausen asks Dr. Sutter to comment on the coalescing of both the Trump and Biden administration approach to China to a much harder line and that similar phenomenon in the Congress.

[15:40] Mr. Kamphausen asks Dr. Sutter what he sees in the “seeming delight” the two leaders have in being with each other, the most recent example being at the 2022 Beijing Winter Olympics, and in drawing their two countries’ fortunes closer together.

[20:42] Mr. Kamphausen raises the question of how Putin sees China’s role with respect to his goals for Ukraine and how China sees its own role.

[25:31] Mr. Kamphausen asks about whether the United States could be pulled back into a Eurocentric focus by Russia’s actions and what this might mean for U.S. priorities in Asia.

[28:56] Mr. Kamphausen asks how Dr. Sutter thinks about the implications for U.S. policy on Taiwan in the midst of the Ukraine crisis at this moment.

[34:44] Mr. Kamphausen asks if it is possible for us to think about a relationship in the future with either Russia or China that would somehow drive a wedge between the two countries.