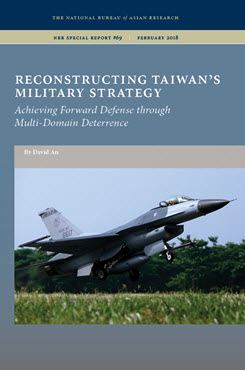 This report identifies the drivers of Taiwan’s military strategy and examines this strategy in the context of the threat posed to the island by the People’s Republic of China (PRC) and other key challenges.

Taiwan’s military strategy consists of securing territory with resolute defense and utilizing multi-domain deterrence with joint capabilities. In pursuing these goals, Taiwan has recently begun to prioritize engaging with potential adversaries farther away from home and increasing self-reliance by developing indigenous weapons. Although Taiwan is becoming concerned about other regional security threats arising from North Korea and the South China Sea, its military strategy is still centered on the threat from the PRC and is based on three factors: the level of threat posed by China, the level of support from the U.S. and its regional security partners, and the government’s and public’s perception of the seriousness of the threat from China. Essentially, Taiwan’s defense strategy will become more aggressive if the threat level is high, expectation of U.S. support is low, and the domestic populace identifies China as a serious threat. Conversely, it will become more relaxed if the level of threat is low, U.S. support is strong, and there is little security concern among the public. Taiwan’s defense strategy will waver if there is a mix of factors, such as if the level of threat is high but U.S. support is uncertain or the public is complacent. The latter scenario most accurately describes Taiwan’s situation in recent decades.