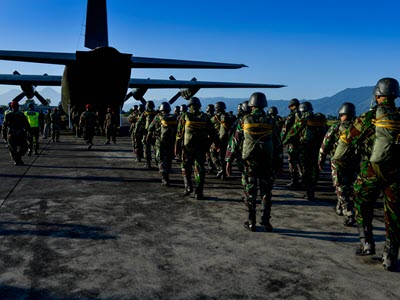 Frega Wenas Inkiriwang examines Indonesia’s efforts to recalibrate its defense diplomacy and then considers the implications for the region.

With the U.S.-China rivalry in Southeast Asia intensifying in recent years, the South China Sea has become a significant arena for strategic competition between the two great powers. As tensions over territorial disputes continue to destabilize the region, geopolitics has become more complex. The presence of the People’s Liberation Army (PLA) in disputed areas of the South China Sea has created operational challenges for the Association of Southeast Asian Nations (ASEAN), the United States, and U.S. allies and partners. Given that any instability in the region caused by Sino-U.S. rivalry will negatively affect ASEAN countries, defense diplomacy with both China and the United States is crucial for managing defense relations and cooperation.

Since the outbreak of the Covid-19 pandemic, every country has struggled to cope with the virus’s impact, including in the defense domain. Many defense diplomacy activities, ranging from strategic dialogues and personnel exchanges to joint military exercises, have been canceled or suspended. As a result, as ASEAN countries struggle to cope with the pandemic, particularly in restarting their economies, they will likely also struggle to enhance their defense diplomacy, which is vital for dealing with the Sino-U.S. rivalry. Therefore, recalibrating defense diplomacy has become urgent for ASEAN countries to adapt to the “new normal” in a post-pandemic world. To better understand this challenge, this essay will examine Indonesia’s efforts to recalibrate its defense diplomacy and then consider the implications for the region.

DISRUPTIONS TO INDONESIAN DEFENSE DIPLOMACY DURING THE COVID-19 PANDEMIC

In Indonesia’s defense strategy, defense diplomacy is critical for fostering mutual and peaceful relations with international partners, including both China and the United States. The restrictions imposed by the pandemic have limited interactions between the Indonesian National Armed Forces (Tentara Nasional Indonesia, or TNI) and other militaries. The conversion of meetings to virtual platforms such as Zoom in the initial period of the pandemic raised security concerns, forcing the Indonesian Defense Ministry to ban the use of this application. Although virtual meetings have been organized through more secure applications, they cannot provide similar advantages to in-person meetings. In particular, they limit nonverbal communication, such as body gestures, that is essential in diplomacy.

“The cancellation, suspension, and conversion of joint exercises have limited the interactions between the TNI and its foreign counterparts during the pandemic.”

Another significant impact of the pandemic on defense diplomacy has been the cancellation or suspension of joint exercises. In the case of Indonesia, the multilateral naval exercise Komodo, which was scheduled to take place in 2020, was canceled. This exercise involved over 30 countries in 2016 and 2018, including the United States and China. Meanwhile, some joint exercises have been converted to virtual formats, such as the tabletop exercise organized under the ASEAN Defence Ministers’ Meeting. Garuda Shield, an annual bilateral exercise between the U.S. and Indonesian armies, was also organized as a virtual exercise. Thus, the cancellation, suspension, and conversion of joint exercises have limited the interactions between the TNI and its foreign counterparts during the pandemic.

Despite various limitations during the pandemic, Indonesia has begun to find opportunities to facilitate defense diplomacy. For example, the country sent its military to China to help retrieve medical equipment for dealing with the pandemic. The use of the TNI in this context signals a strong message about the importance of defense diplomacy.

As countries have commenced adjusting to the pandemic, a “new normal” protocol has emerged, including in the military environment. This protocol has enabled the TNI to resume conducting some in-person defense diplomacy activities, such as joint exercises. In October 2020, for example, 125 Indonesian soldiers went to the Joint Readiness Training Center at Fort Polk to train with U.S. troops. In December 2020, another bilateral military exercise took place in Hawaii, where a platoon of Indonesian paratroopers trained together with their American peers from the 25th Infantry Division. Yet the new protocols are not without disruptions that curtail interactions. In the latter case, the Indonesian paratroopers had to undergo a two-week quarantine before the exercise and work within a “training bubble” throughout the program.

At the ministerial level, Defense Minister Prabowo Subianto has met his Chinese counterpart, General Wei Fenghe, twice during the pandemic. The first meeting was in June 2020, when attending the Victory Day parade in Moscow commemorating the 75th anniversary of Russia’s victory in World War II. Another encounter took place in September 2020, when the Chinese defense minister visited Jakarta. Both Prabowo and Wei discussed the coordination of efforts in tackling the Covid-19 pandemic, the tensions in the South China Sea, and potential defense cooperation between their countries and militaries.

Similarly, Prabowo has met the U.S. secretary of defense several times. In October 2020, after being banned from entering the United States for many years, he was allowed to visit and meet then defense secretary Mark Esper. In December 2020, Prabowo also met the acting U.S. defense secretary, Christopher Miller, in Jakarta. In both meetings, defense cooperation and military engagement between the two countries were the primary focus of discussions.

Nonetheless, these defense diplomacy efforts are not without challenges. As the pandemic continues, Indonesia is struggling to recover economically from its first recession in decades. The Ministry of Defense has been among the institutions most affected by President Joko Widodo’s policies during the pandemic. The defense budget was reduced from 131.18 trillion rupiah ($9 billion) to 122.44 trillion rupiah ($8.4 billion). This cut reallocated funds for arms and ammunition purchases to cover expenses related to the Covid-19 pandemic and has further limited Indonesia’s defense diplomacy activities.

The Covid-19 pandemic has disrupted defense diplomacy in Southeast Asia at a time of increasing tension between the United States and China. The limitations on defense diplomacy from the strategic level, such as through dialogues, to the operational level, such as through joint exercises, will continue to pose a barrier to fostering defense and military relations between ASEAN countries and the two great powers in the region.

In particular, two key issues may potentially arise in the post-pandemic environment. First, most ASEAN countries will continue to struggle economically, forcing ongoing reductions in their defense spending. With these budget cut, countries will have fewer interactions through defense diplomacy as their focus will be on operationalizing and maintaining their regular activities and readiness.

For [Southeast Asia] to manage Sino-U.S. competition, it is urgent for Indonesia to recalibrate its defense diplomacy to pursue both national and regional strategic interests.”

Second, the continuing tension between the United States and China will force ASEAN countries to develop their engagement based on their respective strategic interests. This condition will again test ASEAN’s unity, which was challenged in 2012. A priority will be addressing the unfolding crisis in Myanmar. Thus far, ASEAN has not been able to influence the junta regarding the human rights infringements taking place in the country. Regarding the territorial disputes in the South China Sea between some ASEAN countries and China, it will be difficult for these countries to deal individually with China because their armed forces pale in comparison with the PLA’s capabilities. Therefore, a collective ASEAN approach is vital to help regional states cope with Chinese actions.

As the most populous country in Southeast Asia, Indonesia will play a key role in maintaining ASEAN unity in the new normal. For the region to manage Sino-U.S. competition, it is urgent for Indonesia to recalibrate its defense diplomacy to pursue both national and regional strategic interests. Indonesia’s bebas aktif (independent and active) foreign policy does not mean that the country always must stay neutral. As formulated by the country’s founders, this policy suggests that Indonesia take the best approach based on its national interests.

To begin with, Indonesia should ensure that there will be no further defense spending cuts in the near future. The country also needs to allocate a separate “defense diplomacy budget” that is excluded from regular defense spending. The budget could be proposed under the Ministry of Foreign Affairs and collaboratively operationalized by the Foreign and Defense Ministries and TNI for accountability. Furthermore, despite the disruptions posed by the pandemic, Indonesia needs to use every available tool, whether virtual or in-person, to optimize engagement with its ASEAN neighbors, as well as the United States and China. In particular, it should host additional activities modeled on the Komodo exercise and involve not only the Indonesian Navy but all military services. Through such defense diplomacy, Indonesia can promote ASEAN unity and help the region manage Sino-U.S. rivalry in the new normal.

Frega Wenas Inkiriwang is a lieutenant colonel in the Indonesian Army and a lecturer at the Indonesian Defence University. He finished his PhD in international relations at the London School of Economics and Political Science (LSE) in 2021 under the Indonesia Endowment Fund for Education scholarship. He also holds master’s degrees from Macquarie University in Australia and the U.S. Army Command and General Staff College at Fort Leavenworth in the United States. He is currently a graduate teaching assistant at LSE. 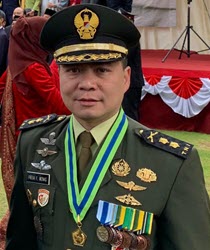