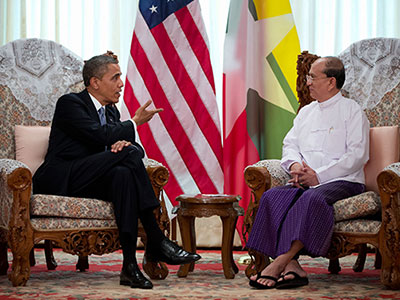 This commentary analyzes the potential impact President Obama’s trip to Myanmar will have on the future of the United States’ Myanmar policy and relations between the two countries.

President Barack Obama’s attendance at the upcoming Myanmar-hosted East Asia Summit (EAS)—his first time attending the EAS since canceling a 2013 trip to Brunei because of a U.S. government shutdown—will be closely watched for two reasons: First, a country-specific interest focuses on U.S. attitudes and commitment to Myanmar’s reform process. Second, there is global and pan-Asia interest in the continuing evolution of the United States’ strategy of rebalancing to Asia.

Obama’s first and only visit to Myanmar, for decades seen as a pariah state, occurred in November 2012, when he spent six short hours meeting President Thein Sein, the pro-democracy figure Aung San Suu Kyi, and various civil society activists. He visited the Shwedagon Pagoda and spoke at the University of Yangon about Myanmar’s reform progress——including successive releases of political prisoners, the removal of obstructions to Aung San Suu Kyi’s parliamentary participation, and passage of other legislation. In his speech, Obama called for continuation of the “remarkable journey” of reform and of efforts toward peace and national reconciliation. [1]

The Myanmar that Obama will be revisiting remains both a study in continuing societal change and a picture of enduring rigidities rooted in autocratic military rule, Burman chauvinism, and minority restiveness. Participatory political reforms and economic liberalization are continuing, albeit at a reduced pace from the initial frenzy of change in 2011. Efforts continue to create enduring peace through a national reconciliation process with the many armed minority movements, a historical process filled with fitful starts and bloody stops. Recent skirmishes in Kachin, Karen, and Shan States, along with xenophobic Buddhist nationalism, have ignited violence targeting minority Muslim and Rohingya populations in Rakhine State.

Outside Myanmar, observers now question the country’s commitment to democratization. Skeptics of the normalization of relations in 2011–12 warn that U.S. policy successes are now coming undone. Despite this concern, senior U.S. officials profess “cautious optimism,” and Obama retains a positive tone in his speeches, mentioning Myanmar in this year’s State of the Union address and at the 2014 West Point Military Academy commencement. [2] At the upcoming EAS, he will focus on the positive trends while explicitly discussing anti-Muslim violence and the need for redoubled national reconciliation efforts. The EAS visit thus provides an opportunity for Obama to reinforce his West Point speech, while praising Myanmar’s government, political opposition, and civil society leadership for espousing democratic governance. He will also highlight the steady easing of U.S. sanctions on Myanmar and note how U.S. businesses (barred from investing as recently as three years ago) have been visiting the country and identifying likely investment opportunities, though the process strikes many as glacially slow. Since 2012, U.S. companies have committed approximately $612 million in foreign investment in Myanmar, a number that is impressive but does not approach anticipated levels. [3] General Electric, Coca-Cola, Pepsi, Proctor and Gamble, Ford, MasterCard, Visa, Western Union, and most recently Gap, Colgate-Palmolive, and Ball Corporation have all announced significant investments. However, the major “gold rush” of investment has not reached expected levels; instead, the majority of U.S. corporations have delayed entry into Myanmar due to the overwhelming and complex investment challenges.

Across Asia and especially to Myanmar’s north, the United States’ growing diplomatic presence ahead of Myanmar’s 2015 general election has also won notice. In this regard, the controversial restrictions imposed by Myanmar’s 2008 constitution, especially the limits on full political participation by politicians and voters alike, may figure prominently in Obama’s EAS speech and private discussions with Myanmar officials. (One constitutional provision makes anyone having a parent, spouse, or child with foreign citizenship ineligible to be president, which is Aung San Suu Kyi’s situation.) Obama will likely recognize that returning to policies of ostracism and punishment would marginalize the United States while benefiting Myanmar’s neighbors that are indifferent to human rights behavior.

The orientation and competence of Myanmar’s military have become major topics for debate ahead of Obama’s visit. Both houses of the U.S. Congress are now considering bills that would severely limit bilateral military cooperation. Proponents of such cooperation point to successful U.S. programs (such as those supporting the democratization of Indonesia) that emphasize safeguarding human rights, professionalization, and the military’s peaceful withdrawal from political and business life.

Balancing the competing interests and contending views of U.S. and Myanmar policymakers will come down to whatever new package of so-called deliverables that Obama’s visit will offer to Myanmar. The United States until now has abided by an “action-for-action” policy intended to encourage some behaviors while deterring others. At this stage, the most significant actions have been taken, such as restoring diplomatic ties, opening USAID and commercial offices, and easing the most restrictive financial sanctions. Secretary of State John Kerry did not offer any new deliverables at the July ASEAN Regional Forum, but President Obama’s visit may include some new carrots, or even sticks.

One of these carrots could involve reinstating for Myanmar the Generalized System of Preferences (GSP) program. This would allow some Myanmar-sourced imports to enter the United States duty-free. Back in 1976, Myanmar became eligible for GSP benefits, but these were withdrawn in 1989 following the former regime’s bloody suppression of street demonstrations in Yangon (then called Rangoon). The Office of the U.S. Trade Representative is now reviewing the reinstatement of GSP privileges for Myanmar. The GSP program can provide entry of up to five thousand products duty-free to promote economic growth in developing countries. To qualify for GSP, Myanmar must meet certain statutory eligibility criteria, which include, but are not limited to, the protection of worker rights and intellectual property rights. Improvement of labor and human rights will be a sticking point for skeptics of Myanmar’s transition and those in the U.S. government concerned with the state of Myanmar’s democratization efforts and could prompt serious debate about GSP reinstatement. Additionally, new financial and technical assistance programs may be rolled out to enable Myanmar to prepare for the 2015 elections, and other critical development programs could be announced as well. In symbolic terms, Obama’s visit may allow official U.S. nomenclature to accept the name “Myanmar,” in place of “Burma,” in all government publications and statements.

Aware that Myanmar is one of his administration’s foreign policy successes, Obama’s messaging during the EAS will set the path, and tone, of Myanmar policy for the remainder of his presidency, showing those who have bet on the success of reform, both within and outside Myanmar, that the United States is not a fair-weather friend. Located between India and China at the crossroads of critical transportation routes and home to an abundance of natural resources, Myanmar is strategically important and holds membership in the increasingly influential Association of Southeast Asian Nations. Given the high strategic stakes across Asia, where countries large and small seek an appropriate and consistent U.S. balancing role in the region, Obama’s policy to cement Myanmar’s political transformation will affect Southeast Asia and the wider Asia-Pacific, as well as Myanmar’s 51 million inhabitants.

[2] “Remarks by the President in the State of the Union Address,” White House, Press Release, February 12, 2013, http://www.whitehouse.gov/the-press-office/2013/02/12/remarks-president-state-union-address; and “Remarks by the President at the United States Military Academy Commencement Ceremony,” White House, Press Release, May 28, 2014, http://www.whitehouse.gov/the-press-office/2014/05/28/remarks-president-united-states-military-academy-commencement-ceremony.

Erin Murphy is Founder of the Myanmar-centric advisory firm Inle Advisory Group. She was previously the Special Assistant to the first ever special representative and policy coordinator for Myanmar, Ambassador Derek Mitchell, and an analyst with the Central Intelligence Agency.

James Clad is Senior Adviser to IHS Jane’s Defence Group in London and Alexandria. He was U.S. Deputy Assistant Secretary of Defense for Asia Pacific Security Affairs from 2007 to 2009 and Professor of Southeast Asian Studies at Georgetown University from 1995 to 2002.