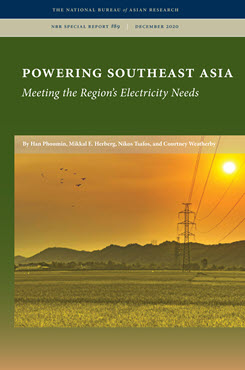 This is the introduction to the report from the 2020 Energy Security Program, “Powering Southeast Asia: Meeting the Region’s Electricity Needs.”

Southeast Asia has been among the regions with the fastest-growing energy demand, rising 6% annually over the last two decades. The inevitable outcome has been a severe deterioration in air quality and significantly higher carbon emissions across the region. The environmental, social, and health impacts of climate change, including an estimated 450,000 premature deaths caused by air pollution in Southeast Asia in 2018, are increasingly shaping national plans for power generation. While there has been significant progress among regional countries in ramping up renewable energy projects, meeting electricity demand growth and ensuring access in remote areas remain key challenges to sustainability in the power sector.

Even as environmental outcomes are increasingly factoring into energy policy decisions, the past twenty years have shown that countries prioritize affordability and security when choosing fuel for power generation. Current national plans suggest that coal will likely continue to be cheap and abundant, retaining and even expanding its key role in the region’s power mix for the next decade. Meanwhile, natural gas faces obstacles as the share of cleaner options like wind and solar grows (albeit from an extremely low base). The challenge of meeting power generation needs while transitioning to a cleaner energy mix reinforces the importance of forceful action to alter the underlying trajectory of rapidly rising demand for electricity.

At the same time, there is heightened geopolitical competition to shape Southeast Asia’s future energy needs. China’s Belt and Road Initiative continues to expand its energy sector financing, with a majority of projects supporting new coal-fired generation across the region. As Nadège Rolland and others have detailed extensively in their analysis for the National Bureau of Asian Research (NBR), including in last year’s report for the Energy Security Program, China’s approach often has strings attached and undermines the economic interests of recipient states in favor of Beijing’s broader strategic and economic interests.

By contrast, the United States and Japan, with endorsement by the G-20, are leading international efforts to promote cleaner “high-quality infrastructure” as a key component of their free and open Indo-Pacific energy strategies. The establishment of the Blue Dot Network to create universal standards to promote quality infrastructure investment is just one of many initiatives. Whether it will be successful, however, remains to be seen. Another initiative, the Japan-U.S. Strategic Energy Partnership, was launched in 2017 and has recently established a trilateral partnership between the United States, Japan, and Vietnam to “provide competitive alternatives to malign actors in the region” and support the development of liquefied natural gas (LNG).[1]

Other key components that have emerged in the United States over the past several years are the Better Utilization of Investments Leading to Development (BUILD) Act, which would more than double the capacity of the U.S. government to support overseas strategic private investment to $60 billion, and the Asia Enhancing Development and Growth through Energy (EDGE) initiative, which focuses on increasing opportunities for trade and investment by promoting public-private

partnerships and assisting partner governments with establishing market-based energy policies. How can the region’s energy policies meet the future demand for power and accelerate the transition toward a cleaner energy mix, while also navigating the complex and charged geopolitical environment created by the U.S.-China rivalry?

Three additional challenges loom over efforts to develop Southeast Asia’s power sector. First, the ability of energy markets to actually absorb available natural gas and LNG into their power mix to replace coal will in many countries depend greatly on reforming and opening up domestic gas markets. Many gas markets are still monopolized by state-owned enterprises. Although some Asian markets have moved toward greater deregulation and liberalization, various rates of reform pose new risks for outside investors. How can stakeholders across the region work together to accelerate the pace of capacity building and market reform?

A second key challenge is bringing infrastructure to scale and effectively mobilizing financing. Southeast Asia is estimated to require more than $2 trillion in energy infrastructure investments, and innovative approaches to financing, as well as better opportunities for public-private partnerships, will be critical to balance regional power mixes. Cheap, abundant coal supplies where infrastructure for coal-fired power is already in place or requires lower upfront costs act as a barrier to investment in new energy sources or technology upgrades. How can U.S.-led initiatives like Asia EDGE, the BUILD Act, and the Blue Dot Network meaningfully support ongoing infrastructure needs in the region? Is the scale of available U.S. and Japanese investment and financing capacity sufficient to compete with China’s massive financing capacity and lower-cost, but less transparent and environmentally sustainable, investment?

A third key challenge will be seizing opportunities created by the Covid-19 pandemic to enact market or financial reforms that would be unlikely to pass under business as usual. Massive disruptions have placed immense pressure on governments throughout the region, many of which are reliant on revenues from the oil and gas sectors or are having to divert project financing for social welfare and healthcare priorities. Yet this also presents a somewhat blank slate for governments to rebuild, raising the question of the short- and long-term implications of the Covid-19 pandemic for political and economic cooperation in the power sector.

Given the important questions that remain in Southeast Asia about the actual implementation and potential for success of the energy dimension of the U.S. Indo-Pacific strategy, the theme of NBR’s 2020 Energy Security Program is “Powering Southeast Asia: Meeting the Region’s Electricity and Sustainability Needs.” For sixteen years this program has provided an assessment of major developments in Asian energy markets and geopolitics to assist policymakers in better understanding and responding to the implications for energy and environmental security in the region. The 2020 program focused on a range of critical issues, including how the Covid-19 pandemic and other developments may shape the trajectory of Southeast Asia’s power mix, what steps are needed to create environments that encourage investment to bridge the infrastructure gap, and what are the prospects for building out a more sustainable power sector that relies on lower-carbon and renewable energy sources.

NBR commissioned essays by four scholars with expertise on these issues. The preliminary results were discussed at a workshop in Washington, D.C., on July 22, 2020, which NBR was pleased to once again co-host with the Woodrow Wilson International Center for Scholars, albeit this time in a virtual setting. Participation in the meeting included senior representatives from the U.S. government and foreign policymaking communities as well as leading industry and geopolitical experts. The authors have drawn on feedback they received at the workshop to strengthen their research and findings.

In the opening essay, Nikos Tsafos from the Center for Strategic and International Studies (CSIS) situates the role of Southeast Asia’s power sector development in the broader context of geopolitical maneuvering and alliance building in the Indo-Pacific. He also emphasizes the requisite to recognize the diversity and scope of the regional states’ needs and provides country-specific considerations shaping the trade and development of coal, natural gas, and renewables. Finally, Tsafos cautions against a one-size-fits-all approach and forcing governments to pick sides in the ongoing U.S.-China competition. The regional countries may have broad goals for achieving energy access, but how they get there will vary, and the vast amount of investment needed will require multiple partners moving forward.

The second essay by Courtney Weatherby of the Stimson Center examines the role for renewable energy in Southeast Asia and the obstacles to energy diversification. She notes that although there are encouraging targets set for renewable energy development across Southeast Asia, one of the key obstacles is the need to rapidly provide electricity access to 45 million people. Although many still highlight the cost or intermittency of renewables as a reason to avoid aggressive expansion, Weatherby considers several case studies, such as solar power development in Vietnam, that show that many of these barriers are surmountable or even no longer exist.

In the third essay, Mikkal Herberg sets the stage for questions shaping high-quality infrastructure investments in Asia and considers the initiatives put forth by countries like the United States and Japan and the role they can play in bridging the infrastructure gap. As highlighted by Tsafos, geopolitical competition can have an impact on which projects get built. The essay expands on this finding and assesses the potential of initiatives like the Japan-U.S. Strategic Energy Partnership, Asia EDGE, the Japan-U.S. Mekong Power Partnership, and the Blue Dot Network. It concludes by outlining the importance of providing competitive alternatives that emphasize free and open markets and align with existing regional and domestic goals.

In the final essay, Han Phoumin from the Economic Research Institute for ASEAN and East Asia examines the importance of sustainable, quality infrastructure and the specific areas in which investments should be focused. He argues that economic development and infrastructure buildout must not come at the expense of environmental or social damage. Instead, there is a need to reassess international approaches to financing clean-coal technologies, as restrictions limit the ability of countries to diversify their supply sources and partnerships. To balance these challenges, Han identifies priority technologies and areas for investment that can support a low-carbon transition. He concludes by considering the impact of Covid-19 on the ability to ramp up efforts for clean-energy transitions that may have previously been less attractive or prioritized.

Collectively, these four essays paint a much clearer and revealing portrait of the needs and prospects for the development of Southeast Asia’s power sector. But the analysis also suggests that much more work must be done if regional countries and their partners across the Indo-Pacific want to move from a broad vision for the region’s future to an executable roadmap that can effectively engage the stakeholders needed to foster sustainable economic and energy demand growth. As the authors of this report note, serious challenges loom for efforts to promote more diverse, sustainable, and secure power sectors and build out the necessary infrastructure to support such a transition. Doing so will also require decision-makers to make difficult choices, including about when and how

to expend limited resources and political capital, particularly amid an ongoing economic crisis brought about by the pandemic.

The 2020 program would not have been possible without the tremendous support, guidance, and dedication of a number of organizations and individuals whose efforts are particularly worthy of recognition. First, we are grateful to Chevron and ConocoPhillips for their ongoing sponsorship of this initiative. Their contributions are indispensable for the program’s activities and research agenda. Second, over the past several months we have received comments from numerous U.S., Japanese, and Southeast Asian scholars, representatives at international organizations, and government officials on how the region is approaching power sector and infrastructure development. These include Virginia Palmer of the U.S. Department of State, Nao Kawakami of the Japan Bank for International Cooperation, Cecilia Tam of the Organisation for Economic Co-operation and Development (OECD), and Ken Koyama of the Institute of Energy Economics, Japan. We were pleased to host these officials in our formal energy programming throughout the course of 2020.

Behind the scenes, Clara Gillispie, Jeanne Choi, Audrey Mossberger, and Tom Lutken of NBR worked tirelessly to develop the program and refine the policy discussions, as did Michael Kugelman and his team at the Wilson Center in support of the July workshop. This report is the product of their hard work, as well as the efforts of numerous others. We hope that you enjoy it as much as we enjoyed working on it.