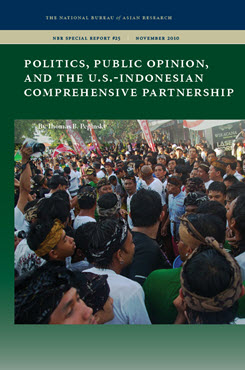 This essay discusses the U.S.–Indonesia Comprehensive Partnership with respect to Indonesian public opinion and the challenges of political accountability in Indonesia’s young democracy.

The U.S.–Indonesian Comprehensive Partnership will be an important tool for realizing U.S. national interests in Southeast Asia and the Muslim world. To do so, though, the partnership must appeal to the Indonesian public, something that existing policy has failed to do. Despite the fact that Indonesian public opinion has not been sympathetic to the United States in recent years, this essay shows that Indonesians’ preferences align in important ways with U.S. interests. That public is represented, however, by a democratically elected government that falls woefully short in various measures of accountability and good governance. The main priority for U.S. policymakers must be to strengthen Indonesia’s democratic institutions to create a truly accountable political system. Such a political system will better promote the realization of common U.S.–Indonesian interests.

The U.S. can take advantage of President Obama’s personal popularity among Indonesians to strengthen relations between these two democracies. If the U.S. understands that the Indonesian public prioritizes clean and effective governance, and is on the whole favorable to moderate politics, democracy, and international economic integration, then these can become a new platform for U.S.–Indonesian bilateral relations. If U.S. policymakers prioritize the strengthening of domestic political accountability within Indonesia, this will increase the likelihood that the U.S.–Indonesia Comprehensive Partnership will yield tangible results that benefit both countries.