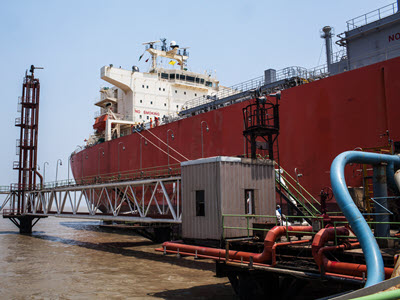 NBR, in collaboration with the Energy Futures Initiative, conducted a two-day virtual workshop exploring the potential for natural gas to help improve energy access in South Asia and achieve the region’s targets for a low-carbon future. As part of this project, NBR’s Chihiro Aita spoke with Shiyana Gunasekara, an energy and climate consultant at the Berkeley Research Group, concerning the role of natural gas in South Asia’s energy outlook, the prospects for low-carbon transitions across the region, and the potential market and infrastructure challenges.

What role does natural gas play in South Asia, and how might its use differ across sectors?

For India and Pakistan, gas faces an uphill battle in gaining an increased share of the power mix, whereas it already makes up 70% of Bangladesh’s power mix. As the power sector is so price-sensitive in these countries, increasing the share of natural gas in the power mix is contingent on the price of the competing fuels. In the medium term, natural gas will likely continue to replace oil and coal in the power sector thanks to policies emphasizing decarbonization; however, beyond 2030, natural gas will likely lose ground in power generation as renewables, measures, and technology to improve energy efficiency, and battery storage scale up.

On the other hand, natural gas will likely expand its share of the energy mix in the hard-to-decarbonize industrial sectors. In all three countries, manufacturing, textiles, agriculture, and fertilizer are major industries that happen to be relatively large consumers of gas. Governments are promoting these industries for both their domestic and export markets, and therefore industrial policy will encourage gas usage through the medium to long term.

How likely are hydropower-intensive countries such as Nepal and Bhutan to explore adding natural gas and liquefied natural gas (LNG) to their energy mix, as other countries in the region have?

For Nepal and Bhutan specifically, adding fossil fuel imports to their energy mix is unnecessary, given that their overall demand prospects are manageable with their existing resources. Neither country has major manufacturing industries that would require the high heat intensity of natural gas; they also do not have any existing natural gas infrastructure to develop a market.

Even for a country like Sri Lanka, which is also reliant on hydropower, there is less need to introduce natural gas into the market. Investing in battery storage, energy efficiency measures and technology, and grid modernization would be smart alternatives here; however, governments need to deliver energy solutions quickly because emergency power solutions are extremely expensive and unsustainable and overall energy demand is only increasing. Currently, the Sri Lankan government wants to monetize its domestic natural gas resources, and global gas and LNG companies are interested in developing a market in Sri Lanka to ensure an offtaker for at least some of the surplus LNG production that is likely to accumulate in the global market in the medium term as major consumers shift their dependence away from fossil fuels.

Numerous governments, development institutions, and export credit agencies have been limiting or banning financing for fossil fuel projects, despite rising demand for natural gas in many economies. Which stakeholders are projected to continue financing gas projects to fill the growing investment gap?

Multilateral development banks like the Asian Development Bank (ADB) and Asian Infrastructure Investment Bank (AIIB), many of the importing governments themselves (state-run entities), and LNG suppliers and exporters (both private and public entities) will fill the gap. If the recent fossil fuel guidance for development banks by the U.S. Department of the Treasury is any indication of where funders and lenders are heading in the short and medium term, we can expect these institutions to support gas projects under limited circumstances, such as downstream gas processing, distribution, and consumption where cleaner options are not available.

For example, the ADB financed almost $870 million for gas projects in Bangladesh from 2016 to 2020 and a gas plant in Afghanistan. The ADB also funded a technical assistance grant for phase one of the Turkmenistan-Afghanistan-Pakistan-India (TAPI) pipeline and a feasibility study for developing an “LNG hub” in Sri Lanka. In India, Petronet (a government-owned oil and gas company) and GAIL (a government-owned natural gas processing and distribution corporation) are investing in existing and sanctioned LNG export projects, import projects, and gas infrastructure. Emerging players like PTT (a Thai state-owned oil and gas company) and Singapore’s AG&P City Gas, as well as larger players like Petronas and Pertamina, are also investing in gas projects throughout South Asia to both tie their anticipated cash flow to projected future demand and hedge against the uncertainty of the natural gas and LNG market.

Securing natural gas supplies is only one step in meeting South Asia’s rising energy demand. Transporting the gas also remains a challenge, and to do so requires the transborder construction of pipelines, such as the contentious TAPI pipeline. What progress has been made on this project, and what are the likely outcomes?

Even though the project has broken ground, the TAPI pipeline will not likely be successfully completed and certainly not be used in its full or intended capacity. India would supposedly be able to import up to a third of its gas through the pipeline and is thus the key market for this project to be commercially viable. However, India is unlikely to rely on a pipeline traveling through unstable parts of Afghanistan and Pakistan for that much of its demand.

The Taliban have historically been a bit fickle on whether they will “allow” the safety of the pipeline route through Afghanistan, and Pakistan has already seen a handful of violent incidents in Quetta (one of the stops on the pipeline route). Since taking control of the Afghan government, the Taliban have expressed their intent to prioritize connectivity in Central and South Asia. However, India is likely still wary, and perhaps more so, of relying on natural gas supply from this route traveling through militant territory. Additionally, given sanctions against the Taliban, it is unclear how organizations like the ADB and other funding sources will continue supporting such infrastructure projects in Afghanistan, especially if the beneficiaries include the Taliban. As a result, I do not see the TAPI pipeline making meaningful progress in reaching India any time soon.

Given the increasing push to reduce carbon emissions and deploy clean energy, what might the outlook for natural gas look like in ten years compared with other technology or fuel options, such as renewables or hydrogen? How might the public and private sectors affect these trends?

In South Asia, where countries are still using diesel and coal for fuel generation, natural gas is important for achieving decarbonization goals within the next decade. Natural gas will likely be used alongside a rapidly growing share of renewables in the power sector. In fact, a working paper from CEEW (an energy and environment think tank in India) calculates that the optimal share of natural gas in India’s fuel mix by 2050 is 18%, considering the country’s adopted 2 degrees Celsius carbon budget.

The prospect for hydrogen in India has drastically changed within the last nine months. The government and private sector have simultaneously backed green hydrogen as a key fuel for the country’s future, with the Ministry of New and Renewable Energy drafting the National Hydrogen Mission policy for consideration in August. Although hydrogen is not yet produced on a commercial scale, due to the high cost of capital, the hydrogen policy will provide a roadmap (including mandates such as the requirement for refineries and fertilizer plants to use some green hydrogen) that will help develop an Indian market for hydrogen. Other interesting developments on hydrogen by the Indian government include its call for international standards for green hydrogen and the newly developed U.S.-India Hydrogen Task Force (a likely spinoff of the U.S.-India Natural Gas Task Force).

Furthermore, the private sector is also betting on hydrogen in a big way this year: Reliance Industries announced plans to bring down the cost of hydrogen to under $1 per kilogram within the decade; Ohmium International’s Indian subsidiary is starting up a hydrogen electrolyzer manufacturing outfit in Karnataka; NTPC has been approved to build the country’s largest solar park (4.75 gigawatts) that will generate green hydrogen in Gujarat; and Indian Oil Corporation recently announced plans to build a green hydrogen plant alongside its wind power project in Rajasthan.

While the private sector is willing to build these projects, the government still must play a key role in creating a positive investment environment for funders and financiers and developing market demand for Indian hydrogen to make the projects commercially viable. Additionally, the public and private sectors can lean into lower-cost blue and gray hydrogen production—hydrogen production using fossil fuels, typically natural gas, with and without carbon capture, respectively—to introduce hydrogen into gas-consuming markets and pave the way for green hydrogen. By leveraging existing natural gas infrastructure, countries can significantly reduce the risk of stranding costly natural gas assets.

Overall, with adequate storage options, renewables will edge out natural gas in the power sector by the 2030s, as long as the region’s policies continue to incentivize the uptake of renewable power generation. Key policies for achieving this goal include grid modernization, public-private partnerships, and improved cost recovery for the state-owned utilities.

Shiyana Gunasekara is an Energy and Climate Consultant at the Berkeley Research Group (BRG). She is also a member of the National Agenda Committee on Energy for the Ceylon Chamber of Commerce and a fellow with the Clean Energy Leadership Institute (CELI) and the Atlantic Council’s Women Leaders in Energy. The views expressed in this interview are her own and not those of the organizations with which she is affiliated.

This interview was conducted by Chihiro Aita, an intern with the Energy and Environmental Affairs group at NBR.