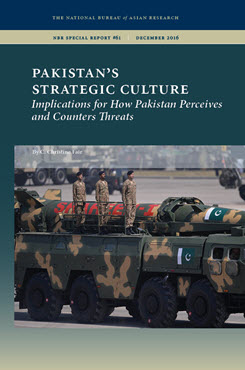 This report analyzes four key concepts undergirding the Pakistan Army’s strategic culture and considers the implications for U.S. and Indian efforts to manage the threat from Pakistan.

Pakistan remains a staunchly revisionist state that both continues to assert territorial equities in Kashmir and seeks to resist India’s rise in the international system. Its revisionism motivated it to start wars in 1947–48, 1965, and 1999, all of which it failed to win, as well as to sustain a proxy war in Kashmir, the most recent campaign of which began in 1989. Pakistan has adopted several strategies to manage its security environment, including ideological tools, the pursuit of strategic depth in Afghanistan, and the use of proxy fighters under its expanding nuclear umbrella. Pakistan continues to pursue these strategies even though they are very unlikely to succeed and have imposed a high cost on the state. Much of its behavior, however, can be explained by the strategic culture of the Pakistan Army. This culture is characterized by four beliefs: (1) that Pakistan is an insecure and incomplete state, (2) that Afghanistan is a source of instability, (3) that India rejects the two-nation theory and seeks to dominate or destroy Pakistan, and (4) that India is a regional hegemon that must be resisted. The Pakistan Army controls most levers of power with respect to national security and foreign policy, as well as domestic policies that influence these domains. Moreover, this strategic culture is enduring and unlikely to change, as will be demonstrated by a study of Pakistani military publications.

C. Christine Fair is an Associate Professor at Georgetown University.