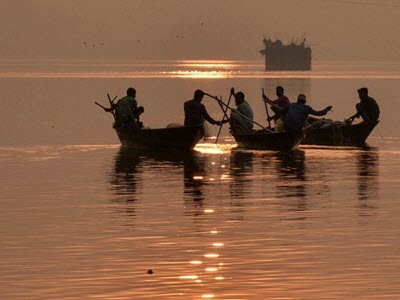 Navigating Opportunities for Cooperation on the Brahmaputra River

The Brahmaputra River, which originates in China and flows through India and Bangladesh, provides a critical supply of water, vast potential for clean-power generation, and opportunities for economic growth. Despite the importance of this river for three of the world’s most populous nations, no formal agreement exists to manage its resources.

Given the importance of the Brahmaputra River Basin for water, energy, and economic security, why has this river been overlooked as an area of focus?

Samaranayake: The Brahmaputra River has often been subsumed within the larger Ganges-Brahmaputra-Meghna basin, with the Ganges receiving the lion’s share of attention. However, the Brahmaputra on its own holds high political and geological stakes for three key countries in Asia—China, India, and Bangladesh, none of which have a water-sharing agreement between them for this river’s resources. For Bangladesh, in particular, the Brahmaputra (known as the Jamuna) is the largest source of water, so the activities of the upper riparians (China and India) are of great significance.

Limaye: In India’s case, less attention is paid to the Brahmaputra than to the Indus or the Ganges because it is not as salient to national life. Only 3% of India’s population and 6% of its territory lies within the river basin, and just a fraction of India’s industrial and economic output emanates from the area. Another factor is that the northeastern states through which the Brahmaputra flows have received less political, security, and economic attention. However, the river is acquiring much greater importance in the context of the development goals for northeast India and the contested Sino-Indian border, including the disputed territory through which the river runs.

Wuthnow: Within China, the Brahmaputra (known as the Yarlung Zangbo in Tibet) runs through rugged and sparsely populated Himalayan terrain. Hydropower projects on the river are small in comparison with the mega-dams built closer to China’s heartland, and there have been few reported incidents of forced relocations of affected residents, reducing public attention. China also tightly controls civil society within Tibet, making it more difficult for environmental activists or journalists to operate there than in other areas of the country.

To date, how have the national governments of India, China, and Bangladesh approached management of the river, both domestically and with the other riparian nations?

Limaye: Only in the past decade has India begun a dialogue with China about the Brahmaputra River that addresses mutual concerns and information sharing. The main issues between India and China regarding the river are mutual dam building, soil erosion, and flooding monitoring. India and Bangladesh discuss the river within their broader framework of riverine issues rather than engaging in a specific dialogue. The key riverine issues for India-Bangladesh relations are cooperation on the Ganges River, implementation of an agreement on the Teesta River, and possible implications of India’s river-linking project for Bangladesh. An overlooked element for India is the need for coordination of perspectives and positions within the country—especially between the two key northeastern states (Arunachal Pradesh and Assam) through which the river runs and the central government in New Delhi.

Wuthnow: Domestically, China has pursued aggressive hydropower development of the Brahmaputra River in Tibet. It opened the Zangmu dam in 2014, and several more dams are in varying stages of construction. While these dams are comparatively small, this construction nevertheless supports electricity generation in western China and aligns with its national goals of raising non–fossil fuel energy consumption. Internationally, China has primarily acted bilaterally, concluding hydrological data-sharing accords with both India and Bangladesh. This is consistent with its general preference for dealing with other riparians on an individual basis (such as bilateral water agreements with Russia, North Korea, and Kazakhstan) rather than in multilateral settings, where China worries that it might face coordinated opposition from other states.

Samaranayake: Bangladesh’s domestic management of the river has mostly been reactive. During the monsoon season, the country is focused on mitigating the effects of the erosion and floods that take place every year. Then the pendulum swings to the other extreme during the dry season, when there is less availability of groundwater for agriculture. Externally, Bangladesh has focused its attention on the Teesta River tributary of the Brahmaputra rather than on the larger river system. This is because there are acute shortages of water in the Teesta River. In 2011, Bangladesh came close to signing an agreement with Prime Minister Manmohan Singh to share this river’s resources, but the effort failed due to opposition within India from Mamata Banerjee, the chief minister of West Bengal. Even though the Modi administration has signaled its intent to conclude this agreement, Banerjee continues to block the deal to maximize water resources for her state. There are signs, however, that Dhaka is seeking to capitalize on the momentum of Modi’s re-election to pursue the speedy conclusion of negotiations.

What are some of the factors inhibiting further cooperation on managing the Brahmaputra River?

Limaye: In the case of India-China relations, the lack of cooperation on the Brahmaputra reflects the fundamental mistrust between the two countries. The river flows through disputed territory and therefore raises sovereignty issues. In the wake of the Doklam standoff, for example, China refused to share data on the river with India. At best, the two can work toward information sharing, environmental protection, and confidence building (e.g., about dam construction). In the case of India and Bangladesh, despite the river’s huge importance to Bangladesh, there has been limited focus on the Brahmaputra per se for the reasons Nilanthi has noted above. The Ganges and Teesta Rivers, as well as Dhaka’s concerns about India’s river-linking plans, have played a greater role in bilateral relations. However, recent years have seen the relationship improve, which could help put the Brahmaputra on the bilateral relations map and lead to another area of connectivity and cooperation.

Wuthnow: The mutual mistrust and antagonism between Chinese and Indian officials are the prime reasons why a full water-sharing accord is unlikely. The theory that Beijing has clandestine plans to divert the headwaters of the Brahmaputra for domestic use has been circulating for years, though there is no conclusive evidence that it actually harbors such plans. China, however, has tried to leverage the river for geopolitical purposes in a less dramatic way. As Satu mentioned, during the 2017 Doklam standoff, Beijing suspended hydrological data sharing with New Delhi for several months. This set a troubling precedent and potentially put civilians at risk because the data was being used in India to improve flood forecasts. In addition, Chinese scholars are concerned about Indian construction activities on the river in Arunachal Pradesh, which China claims as “southern Tibet.” This creates new “facts on the ground” in that contested region and might reduce China’s leverage in future boundary negotiations.

What opportunities exist (or need to be created) for local governments to play a role in managing competition over water resources in the Brahmaputra River Basin?

Limaye: India’s northeastern states, especially Arunachal Pradesh and Assam, have huge equities in the Brahmaputra River. As noted earlier, there needs to be better coordination between these states and with the central government in New Delhi. Currently, there is limited cooperation through mechanisms such as the Northeast Water Resources Authority, but a more effective consultation mechanism could potentially be devised. That said, it is not likely that India will allow its states to have direct negotiations with either China or Bangladesh, or local authorities in the two countries.

Wuthnow: The Tibetan Autonomous Region does not play a direct role in international negotiations, but there could be some opportunity for more informal discussions among local officials and scholars. Local governments, along with Chinese state-owned enterprises and individual researchers, might share best practices in areas such as dam safety and environmental protection. Local law-enforcement services might also team up with their downstream counterparts on humanitarian assistance and disaster relief training, and could even be mobilized in the event of a natural disaster. This type of practical cooperation could be highlighted by Chinese and Indian leaders to demonstrate their commitment to a better overall relationship, which has generally been a goal for both Xi Jinping and Narendra Modi.

Samaranayake: Bangladesh manages the Brahmaputra River at the national rather than the local level. This is different from India, where state-level officials play such a large role in the management of water resources that thus far a major Indian foreign policy initiative has been blocked—the signing of the Teesta River agreement with Bangladesh.

How might international organizations and other countries support efforts to mitigate water insecurity in the Brahmaputra River Basin?

Samaranayake: The World Bank and the UN Food and Agriculture Organization have been critical drivers in raising awareness of the Brahmaputra River as distinct from the larger Ganges-Brahmaputra-Meghna basin. In fact, the World Bank’s South Asia Water Initiative has a separate Brahmaputra initiative that seeks to bring together various stakeholders and experts. Individual extraregional countries have a role to play as well. For example, several European countries and Australia conduct capacity-building initiatives on water security around the world. In the Brahmaputra basin, they could fund efforts to reinvigorate river navigation networks, increase storage of monsoon rains for use in the dry season, and improve flood-forecasting tools.

Regarding a potential U.S. role, the United States does not appear to conduct capacity building on water security in this region on the scale that European countries do. Nevertheless, the U.S. Army Corps of Engineers provides technical assistance on water resources to various countries—which could be useful to Bangladesh in the areas mentioned above in the Brahmaputra River.

Establishing regular dialogues that assemble both scientists and diplomats should be another priority and will be crucial to exploring the art of the possible in terms of cooperation. Scientists can raise awareness of the geological aspects of the river and explain its changing conditions to national policymakers. Chief among these are the effects of climate change and the impact of sedimentation occurring in China on the downstream share of Brahmaputra resources. Meanwhile, diplomats can use this knowledge to work on plans for securing riverine resources within the larger context of bilateral and multilateral equities for all three countries.

In sum, a lot more can be done to plan for the long-term management of the Brahmaputra River, with the international community serving as a catalyst for greater cooperation among China, India, and Bangladesh, which are ultimately responsible. Although the river is not yet in a state of crisis, the three countries need to begin taking steps now toward a cooperative agreement rather than waiting until the situation is dire.

Nilanthi Samaranayake is Director of the Strategy and Policy Analysis Program at CNA in Arlington, Virginia.

Satu Limaye is the Vice President and Director of the East-West Center in Washington, D.C. He is also a Senior Advisor at CNA.

Joel Wuthnow is a Research Fellow in the Center for the Study of Chinese Military Affairs in the Institute for National Strategic Studies at the National Defense University.

This interview was conducted by Ashley Johnson, a Project Manager with the Trade, Economic, and Energy Affairs group at NBR.