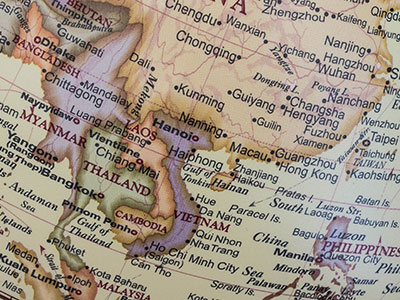 Myanmar's Re-emergence and the Implications for U.S. Relations in Southeast Asia

Senior policy experts at a December 2013 roundtable discussion examined the progress of Myanmar’s reforms and prospects for the country’s re-emergence within Southeast Asia. Read a brief summary report.

Myanmar’s recent political and economic reforms have had a dramatic effect on the country’s domestic and foreign relations, including with the United States. As the country opens up, it has assumed a different role within the Association of Southeast Asian Nations (ASEAN), which Myanmar is chairing during 2014, and has developed substantially different relationships with the United States and Western Europe. The developments in Myanmar’s foreign relations and its growing role in the region are striking considering the country’s decades of relative isolation from the West. As a result of the sweeping reforms since 2011, the United States is presented with a tremendous opportunity to more fully solidify its relationship with ASEAN through expanded engagement with Myanmar. With tentative optimism for future progress, Washington will continue to seek out arenas for engagement and assess the progress of Naypyidaw’s reforms as they continue. If successful, the country’s reforms will strengthen ASEAN overall by helping to ensure greater regional stability and promoting economic integration.

Myanmar assumed the chairmanship of ASEAN in January, and 2014 will be a litmus test of the country’s dramatic reforms, which began only a few years ago. As head of this regional forum, Myanmar has a chance to lead in a number of key issue areas for Southeast Asia. Yet it must also continue to address the challenges that remain within its own borders, including completing peace negotiations with numerous ethnic groups and preparing for upcoming elections. On December 9, 2013, the National Bureau of Asian Research (NBR) and the Henry M. Jackson Foundation convened a group of senior policy experts for a roundtable discussion to examine the progress of Myanmar’s reforms and prospects for the country’s re-emergence within Southeast Asia. This discussion was part of a strategic initiative aimed at deepening understanding within Congress about the importance of U.S.–Southeast Asia relations. Participants explored the progress of recent reforms and the remaining challenges for the Myanmar government, as well as how the reform process has affected the country’s relations with the United States, China, and ASEAN, among other stakeholders.

The political and economic reforms in Myanmar have been substantial, but observers cannot expect an easy transition to a democratic state. Naypyidaw’s unique prescription of top-down liberalization guarantees that the path of change will be slow and arduous. After having controlled nearly every aspect of the country for decades, the remnants of the prevous military government maintain considerable influence on the economy, as well other key institutions. Thus, it will be necessary for the United States to help nurture the reform process and encourage further progress. U.S. efforts to support ongoing reforms are worthwhile because a democratic Myanmar will increase stability within Southeast Asia, as well as provide a strong global example of democratization.

In August 2011, Myanmar’s president Thein Sein met with opposition leader Aung San Suu Kyi to discuss how to liberalize the country. This was a surprising move, considering that Aung San Suu Kyi had been sentenced to house arrest just a year earlier. From the start, many domestic and outside observers were skeptical of the potential for a top-down transition to “discipline-flourishing democracy” because the reforms up to that point, especially the election of 2010, had been questionable in scope and transparency. [1] However, there has been a series of dramatic changes marked by significant new legislation, including the promising 2012 law that ended direct censorship of the media. Nonetheless, some new laws have been criticized as undermining the goals of reform. One example is the electronic transfer bill, which some experts note is worrisome to civil society actors due to provisions that give the government considerable surveillance capacity. Yet despite troubling pieces of legislation such as this one, the general trend toward codification of the reform process represents the government’s greater commitment to the rule of law and is thus an important step that should be encouraged.

Myanmar’s reforms have increased economic engagement with members of the European Union, the United States, and other countries. The United States formally eased financial and investment sanctions in 2012, [2] with new investment by U.S. companies such as General Electric and Coca-Cola likely paving the way for more engagement as reforms continue. However, because most of the population lives in rural areas, investment in natural resources and consumer goods does not affect the majority of people. The unevenness of economic growth is worrisome to some experts and focuses attention on the need for more targeted trade and investment that could lead to real improvements in the lives of ordinary Burmese people.

Additionally, effective economic reforms require reliable administration. Ministries in Myanmar do not yet have the capabilities to implement many of the country’s laws. The military government controlled economic institutions for decades, and those who were left outside that structure must now build capacity to develop the nation’s economy. Further limiting the government’s effectiveness are the widespread problems of land grabbing and the lack of rule of law. New legislation that authorizes the government to seize land for the national interest allows cronyism to continue and jeopardizes the success of further economic reform. [3] However, elections are approaching in 2015, and the current leadership will be held accountable for its policies through the democratic process. Thus, it is in the interest of Myanmar’s leaders to build broader support by delivering more tangible development and eradicating cronyism.

Myanmar’s foreign relations have developed dramatically as a result of the country’s reforms. The United States and many European countries have begun to repair relations with Myanmar that had stagnated during the decades under sanctions. The country is also expanding relations with its neighbors, and international exposure from serving as the ASEAN chair in 2014 will provide important learning experiences.

Compared with other actors, the United States has thus far engaged relatively little in Myanmar, but there are opportunities to work more with civil society organizations in areas such as human rights and development. In the coming years, U.S.-Myanmar trade and investment relations will likely increase. Because of the complex relationship between China and the United States in the region, such heightened economic engagement may affect the Myanmar-China bilateral relationship. During the years of U.S. and EU sanctions, China was a key investor in Myanmar. Now, as Myanmar broadens its sources of investment, there will be more varied avenues of economic development.

However, Myanmar’s foreign relations need not constitute a zero-sum competition between the United States and China. The two powers offer the country different types of engagement, as the United States has heavily prefaced its engagement on political, economic, and social concerns, whereas China has not. A positive sign is that China has not resisted the recent changes in Myanmar, and some Chinese investors have adjusted their investments and are looking to renegotiated agreements to better embrace the new environment. Yet Myanmar’s democratization process has been more abrupt and far-reaching than Beijing likely expected. Moreover, the transformation has been greeted with some wariness by Beijing because it has led to increased scrutiny of China’s activities within Myanmar. [4]

The prospects of Myanmar’s reform process and international engagement are complicated by the country’s ongoing internal unrest. The central government is working to negotiate a comprehensive ceasefire agreement with the country’s many armed ethnic groups. Because of the number of actors and interests at play, this process is exceedingly complex, but there has been considerable progress. Key sticking points, such as autonomy, management of natural resources, and political representation are being discussed, and the fact that the negotiations are continuing in the face of these complicated issues is a positive development.

Though reforms are still needed, Myanmar’s military no longer aims to run the country singlehandedly. The military now must shift its focus from internal conflicts to the more traditional role of defending the borders. To do this, the military and armed ethnic groups need to reach a compromise between the poles of autonomous armed militias and one united military. This process will be slow and difficult, but President Thein Sein has put substantial effort into these negotiations and would like peace to be achieved as a key element of his legacy

The armed militias with which the government is negotiating are not themselves free from human rights violations, however. For example, Human Rights Watch has reported the abuse of Burmese migrants by the Democratic Karen Buddhist Army. [5] As the relationships of these militias with the central government are not set, direct U.S. engagement could cause a delay or breakdown in the ongoing negotiations. Additionally, in the past, some of these militias controlled the natural resources and related economic profits in a region, which curtailed the ability of the local people to reap these benefits. These and other past transgressions have led some to distrust the militias.

Myanmar’s western state of Rakhine also remains a troublesome area for the government. In June 2012 the religious and ethnic violence between Rakhine Buddhists and Rohingya Muslims left hundreds dead and destabilized the region. The ethno-nationalist nature of the violence, which in 2013 spread to central Myanmar, will further complicate discussions of ethnic representation in the developing constitution. [6] Additionally, the government must deal with tens of thousands of internally displaced persons resulting from this violence. These issues pose major challenges to the developing relationship between Naypyidaw and the country’s varied ethnic groups.

In 2015, Myanmar will hold its next round of parliamentary elections. Preparing for successful and fair elections will challenge the top leadership in Naypyidaw and provide another milestone by which to measure the progress of reforms. There are significant divisions between the three leaders—President Thein Sein, opposition leader Aung San Suu Kyi, and Speaker of the House Shwe Mann—on issues such as reforms to the country’s constitution, and these differences will complicate the electoral process. Some experts have also expressed concerns that the existing political parties in Myanmar have done little to build a second-generation leadership. For example, the National League for Democracy, led by Aung San Suu Kyi, has not groomed a potential successor, and this, combined with the struggle to engage the country’s burgeoning youth population, may leave the party unprepared for long-term leadership.

Myanmar has accomplished an impressive amount of reform in the last three years, but significant challenges remain. The 2014 chairmanship of ASEAN will provide opportunities for Naypyidaw to prove internationally that the reform process will continue. Importantly, the economic and political changes have been so substantial that it would now be difficult for Myanmar to turn its back on democratization. The country’s transformation from a state under specific santions into one the United States can engage with fully as ASEAN chair is an important step for ASEAN cohesion, as well as broader U.S. relations in Southeast Asia. If successful, Myanmar’s reforms will ultimately benefit its people, the country’s partners, and the region as a whole, and they thus should be encouraged through ongoing U.S. engagement and support.

[1] Priscilla Clapp, “Prospects for Rapprochement between the United States and Myanmar,” Contemporary Southeast Asia 32, no. 3 (2010): 410.

This report was prepared by Laura Schwartz, an Intern for the Trade, Economic, and Energy Affairs group at NBR.