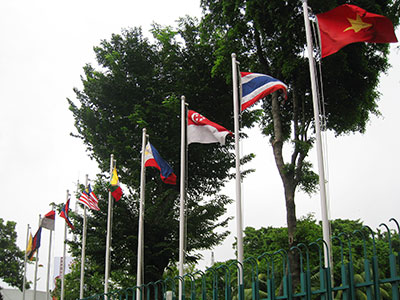 Moe Thuzar (Institute of Southeast Asian Studies) assesses Myanmar’s prospects as the 2014 chair of ASEAN. She contends that it is in the interest of both the United States and ASEAN to work to ensure that Myanmar’s chairmanship year strengthens the country’s reforms and path toward democracy.

Myanmar’s sweeping reforms since 2011 have captured the world’s attention, provoking both approbation and criticism. In an atmosphere of heightened expectations to “get it right” this time, reformist president Thein Sein faces a daunting task. Myanmar will assume the coveted chair of the Association of Southeast Asian Nations (ASEAN) in 2014. A symbolic ceremony at the 23rd ASEAN Summit in Brunei Darussalam handed over chairmanship to Myanmar in October, but the official duties will not begin until January 1, 2014. Having given up its first chance to chair ASEAN in 2006, Myanmar will assume these responsibilities in a regional environment that emphasizes rules-based practices and people-centered policies.

Naypyitaw has had several practice runs for hosting high-profile events. The largest international gathering in Myanmar’s recent history was the World Economic Forum on East Asia, held in June 2013, which brought together decision-makers from civil society and the business, policy, and academic communities from the world over. Naypyitaw will host the 27th Southeast Asian Games in December, and open Myanmar’s ASEAN year in January 2014 with a retreat of the ASEAN foreign ministers to discuss and set the regional discussion agenda for 2014.

The ASEAN chair gives Myanmar an opportunity to show that it is both a country on the road to change and a responsible member of ASEAN. The theme for Myanmar’s ASEAN year indicates this overlap in foreign policy aspirations: “Moving Forward in Unity for a Peaceful and Prosperous Community.” Myanmar’s actions in the following areas will shape the contours of the country’s foreign policy thrusts in 2014.

National reconciliation, as far as the political reforms go, includes making good on President Thein Sein’s promise to release all political prisoners by year’s end [1] and negotiating ceasefires with armed ethnic groups. The inclusion of Aung San Suu Kyi’s National League for Democracy in the country’s political process is also a critical step toward reconciliation. The focus is now on negotiating a comprehensive ceasefire agreement with ethnic armed groups.

The Myanmar Peace Center, established under the aegis of the International Peace Donor Support Group in June 2012, is coordinating ceasefire negotiations and balancing the interests of the different armed groups involved. Peacemaking in Myanmar is fraught with complexities, notwithstanding the breakthrough on November 1 between government negotiators, including the army, and at least seventeen armed ethnic groups. Much hinges on the success of these nationwide ceasefire negotiations, which would potentially signal the end of the long, drawn-out civil war that has been waged since the country’s independence. With peace finally in sight, Myanmar’s reassurances to the international community will be given stronger effect and boost confidence in the country’s economic future. Even with recent developments, however, the process of political dialogue will occupy many of the remaining months of Thein Sein’s administration, well into the election year of 2015.

The larger picture of peace negotiations encompasses efforts to resolve the racial and religious animosities that have arisen from the violence in Rakhine State in June 2012. Starting with communal clashes between Muslim Rohingya and Buddhist Rakhine nationals, the violence has escalated into ethno-nationalist sentiments that resonate with those who feel they are not reaping the benefits of the rapid changes taking place in the country. Deep-seated desires for racial purity and security against “outsiders” have also led to discriminatory practices. Conflicts of this nature highlight the need for more people-centered efforts to rebuild the trust broken over decades of mismanagement. Although Myanmar has stated that the conflict is internal, Naypyitaw is certain to face questions on this issue in 2014. The government will need to prepare more credible responses. ASEAN’s modus operandi of quiet, informal diplomacy in preventing and defusing conflicts may also achieve more prominence.

Thein Sein has highlighted the importance of economic development in building (and sustaining) peace. Although a first wave of opening up in the 1990s floundered, Myanmar’s economic reforms are now taking shape in the context of the region-wide drive to establish the ASEAN Economic Community by 2015. Two important achievements thus far are the unification of the country’s multiple exchange rates in April 2012 and the adoption of a new foreign investment law in November 2012. These measures, combined with the easing of economic sanctions by the United States and Australia, as well as the European Union and some of the individual EU members, have opened up opportunities for investors from these countries. Investors from the ASEAN countries, China, Japan, and South Korea continue to enjoy a first-mover advantage.

Still, the success of economic reforms hinges on how effectively Myanmar can tackle issues of corruption, accountability, and transparency. Further reforms in the financial sector and the establishment of a stock market by 2015 will require appropriate regulatory and operational infrastructure to be in place. The business community in Myanmar has voiced its concern over whether domestic businesses are capable of competing with foreign companies. Additionally, the intense foreign interest in Myanmar’s natural resources requires careful management of expectations, particularly in the communities affected by the projects. The government was compelled to suspend the $3.6 billion Myitsone hydroelectric dam project in Kachin State in 2011 and renegotiate the Letapadaungtaung copper mine project in 2012 following popular protests.

An Independent and Active ASEAN Chair

Myanmar’s exercise of its “independent and active” foreign policy will come to the fore in 2014. The world’s attention will be focused on the country’s ability to steer discussions among ASEAN members on dealing with China and territorial disputes in the South China Sea, as well as other contentious issues concerning regional peace and security that may arise. Countering skeptical views on Myanmar’s ability to deal with external attempts to influence the chair requires a delicate balancing act between dominant and rising powers, whose strategic interests converge in the country. In the years under military rule, circumstances did not permit real independence in Myanmar’s conduct of its foreign policy. The next year presents a litmus test for the country’s proactive independence while it fulfills its ASEAN responsibilities. Myanmar is also the coordinator for ASEAN-U.S. dialogue relations during 2012–15. This is a rare opportunity for Naypyitaw to take the lead in strengthening the U.S. pivot to Asia and engaging the ASEAN-U.S. dialogue process to enact reforms.

In addition, this dual role of ASEAN-U.S. dialogue coordinator and ASEAN chair may help Myanmar balance relations with China, so that negotiations on a Code of Conduct in the South China Sea will proceed on an even keel. As an ASEAN member state, as well as a non-claimant state, Myanmar has a two-fold obligation to be neutral on this issue and uphold ASEAN consensus. [1] It has had the benefit of observing how the ASEAN chairs for 2012 (Cambodia) and 2013 (Brunei Darussalam) managed regional discussions on the topic. It is likely that Myanmar, as chair, will consult with and be supported by fellow ASEAN members such as Indonesia and Singapore in order to achieve consensus on these delicate matters.

It is thus in the interest of both the United States and ASEAN to ensure that Myanmar’s chairmanship year strengthens the country’s reformist credentials, entrenches the right policies for reaping the peace dividend, and helps set the country squarely on the road to democracy.

[1] There have been eleven amnesties since May 2011, and the remaining number of prisoners in custody varies according to different sources. At the time of writing, an estimated 60 political prisoners were still behind bars.

[2] Myanmar’s director-general for ASEAN Affairs, U Aung Lynn, was quoted by Eleven Media Group in a door-stop interview (in Burmese) on the sidelines of the preparatory Senior Officials Meeting for the 22nd ASEAN Summit in Brunei, on April 24, 2013. U Aung Lynn reiterated this position at a public forum on ASEAN held in Yangon on July 11, 2013.

Moe Thuzar is Lead Researcher for socio-cultural affairs at the ASEAN Studies Centre (ASC) at the Institute of Southeast Asian Studies (ISEAS). She has been with the Centre since May 2008. Ms. Thuzar was appointed an ISEAS Fellow in July 2012 and is with the ISEAS Myanmar Studies Programme.

The National Bureau of Asian Research would like to thank the Henry M. Jackson Foundation for their generous support that allowed this commentary to be published.