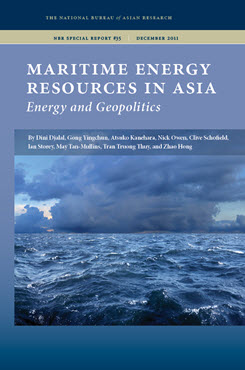 From NBR Special Report no. 35

In this introduction to the NBR Special Report “Maritime Energy Resources in Asia: Energy and Geopolitics,” which was commissioned as part of the project “Maritime Energy Resources in Asia (MERA),” principal investigator Clive Schofield (University of Wollongong, Australia) provides background on the collection of essays dealing primarily with the key, overarching energy security challenges faced by the states of East and Southeast Asia bordering the East China Sea, South China Sea, and Gulf of Thailand.

Recent months have witnessed escalating tensions among the coastal states of East and Southeast Asia over the broad offshore areas that are subject to competing maritime claims. These developments have featured increasingly robust “diplomatic” exchanges, including multiple claims and counterclaims together with protest notes and counterprotests being lodged with the United Nations secretary-general, and, perhaps most worryingly, a number of confrontations at sea. The latter incidents have, notably and alarmingly, featured several interventions on the part of the vessels of one state designed to prevent oil exploration activities by other claimant states. These activities serve to underscore the widely held view that the territorial and maritime disputes that have long plagued the East China Sea, South China Sea, and Gulf of Thailand have a strong marine resource, particularly seabed energy resource, dimension. Indeed, these long-standing territorial and maritime disputes are set against the backdrop of persistent perceptions on the part of claimant states that valuable and increasingly urgently needed marine resources are at stake and potentially at risk. An additional source of disquiet in this context is that the states involved have also been engaged in rapid, sustained, and arguably competitive military modernization efforts.

East and Southeast Asian states are facing severe and increasing energy security challenges. Regional economies are generally poor in natural resources, trade-dependent, and energy-intensive in character. Regional energy demands, especially for natural gas and fuels derived from crude oil, continue to escalate. Simultaneously, indigenous production of oil and gas has been for the large part either plateauing or declining. This divergence between energy demands and domestic supplies has led to increasing reliance among East and Southeast Asian states on foreign sources of supply, including energy imports that are predominantly delivered by sea.

The essays included in this volume were commissioned as part of a National Bureau of Asian Research (NBR) project: Maritime Energy Resources in Asia (MERA). They deal primarily with the key, overarching energy security challenges faced by the states of East and Southeast Asia bordering the East China Sea, South China Sea, and Gulf of Thailand. The essays also explore the geopolitical, military, and diplomatic contours of the territorial and maritime jurisdictional disputes that remain an abiding feature of these semi-enclosed seas. Moreover, the potential impacts of realizing seabed resource development are considered here. A companion volume addresses key aspects of the relevant international legal regime and examines avenues for realizing increased maritime cooperation with a view to facilitating the development of ever more urgently required East and Southeast Asian energy resources.