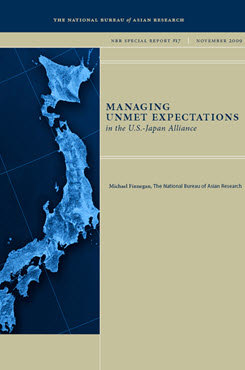 The alliance is failing to meet the expectations of both the U.S. and Japan in significant ways. For the U.S., the continuing inability of the alliance to operationalize itself in the core mission of the defense of Japan as well as to be operationally relevant in the region remain the key failings. For Japan, the primary growing concern is the U.S. meeting and sustaining commitments to the defense of Japan, including extended deterrence. At base, both partners have reasonable reasons to feel their core expectations are not being met nor will be met by the current trajectory. Thus, despite public statements about strength, the alliance is actually quite brittle precisely at a time when both allies are perhaps depending on it more than ever. In a crisis the exposure of the alliance’s inability to meet key expectations is likely to engender a subsequent significant and deal-breaking breakdown of confidence, leading one or both partners to consider alternatives beyond the current configuration.