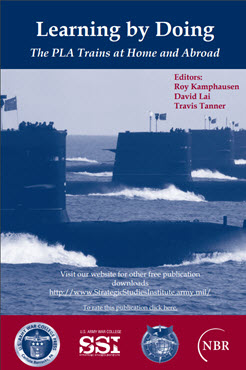 Released in cooperation with the Strategic Studies Institute of the U.S. Army War College, this volume provides a timely and critical look at how the PLA has sought to gain practical knowledge from exercises and noncombat operations, in an effort to better understand the PLA’s ability to employ its developing capabilities in a variety of potential scenarios.

In an effort to better understand the PLA’s ability to employ its developing capabilities in a variety of potential scenarios, this year’s workshop examined how the PLA learns by doing, specifically through its exercises and noncombat operations at home and overseas, and through key logistical and theoretical developments. In many ways, this year’s workshop was the second installment of an examination of how the PLA has sought to gain experience in the practice of modern warfare despite lacking recent combat experience of its own. The previous volume in the annual series—Chinese Lessons from Other Peoples’ Wars (2011)—examined what the PLA has learned from its observation of the armed conflicts of foreign nations. This volume seeks to build on these findings and examine how the PLA follows Mao Zedong’s maxim to learn by doing by analyzing another major source of the PLA’s practical knowledge, namely its exercises and noncombat operations.

The book’s key findings can be summarized as follows. First, recent PLAN exercises and operations point to an increasing interest in developing expeditionary naval capabilities and a presence in distant seas, suggesting that a move beyond the current “near seas” focus is both possible and an extension of existing efforts. Second, PLA ground force exercises—rather than aiming to intimidate others by demonstrating the ability to project power beyond China’s borders—focus on moving military power within China, both to defend China’s borders and perhaps as a prelude to military restructuring in which smaller but more mobile formations could replace larger and more static ones. Third, through its participation in international military exercises as well as peacekeeping operations (PKO) and humanitarian aid and disaster relief (HADR) missions, the PLA is gaining greater capabilities to deploy outside of China’s borders for a variety of missions. Finally, PLA operations are increasingly supported by a modern, civilian-integrated military logistics network, though a lack of overseas bases continues to limit the effectiveness of this network as it pertains to overseas power projection capabilities.