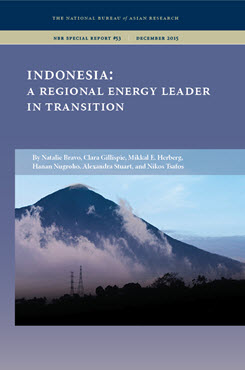 From NBR Special Report no. 53

The central energy policy challenge for Indonesia is meeting rising domestic energy demand. There is no shortage of natural resource potential to supply this rising demand, but greater policy coordination and investment are needed in order to boost production of all energy resources if Indonesia wants to avoid becoming a net importer of energy. To this end, President Joko “Jokowi” Widodo has made it a priority to place reformers in key policy positions, and the government has adopted a national energy policy that focuses on strategies and tools for addressing concerns that hinder energy sector investment. There are, however, a number of structural and policy challenges that continue to complicate further progress. The biggest challenges include persisting energy subsidies, a lack of infrastructure, the regulatory environment, corruption, and ongoing questions about economic nationalism.

Alexandra Stuart is the Director for Indonesia, Energy and APEC at the US-ASEAN Business Council.