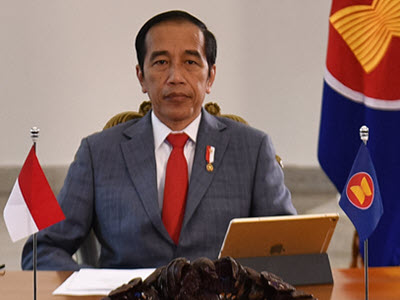 Kiki Verico examines how Indonesia’s views on the Indo-Pacific are connected to its broader international economic views of political neutrality and a market mechanism–based approach.

Indonesia’s perspectives on trade and economic issues in the Indo-Pacific are rooted in the concept of “Indo-Pacific.” This concept complements the landscape-based perception of the Asia-Pacific region with an increased focus on the seascape-based concept of the Indian Ocean states. As a maritime state located at the intersection of these two regions, Indonesia has long had an interest in utilizing the “Indo-Pacific” framing, as well as in emphasizing the centrality of the Association of Southeast Asian Nations (ASEAN).[1] Geographically, the location of Indonesia is of strategic significance to the Indo-Pacific. Between its western island (Sumatera) and peninsular Malaysia lies the Malacca Strait, which connects the Indian and Pacific Oceans. The eastern islands of Indonesia (Papua, Celebes, and Maluku) border the Pacific Ocean.

In terms of population and GDP, Indonesia is the biggest country in Southeast Asia. This makes Indonesia central to the region’s geopolitical economy and places it firmly as one of the Indo-Pacific’s middle powers, alongside countries such as South Korea and Australia. Nevertheless, in terms of GDP per capita, Indonesia is not yet a high-income country. It is only weakly connected to the ASEAN production networks that have served as a growth engine for countries such as Vietnam and Malaysia.

The damage to Indonesia’s current account and capital account caused by the decreasing value-added share of manufacturing in the Indonesian economy since 2002 has held economic growth below its potential. Indonesia needs to jump-start the manufacturing sector to return it to its place as the key economic growth driver. This effort requires international engagement in the form of trade and investment inflows. The critical factor here is global production networks, where Indonesia needs to enhance its backward linkages—that is, its use of intermediate imports in the production of goods for export.[3] Accordingly, it is essential for Indonesia to have a neutral political-economic position with market mechanism–based relations in the world, particularly in the Indo-Pacific context. This essay examines what kind of political-economic neutrality Indonesia should pursue and how it can preserve and transform this neutrality into a market mechanism–based approach.

Indonesia has taken steps to enhance its trade and investment networks by improving its backward linkages in global value chains. To achieve this, Indonesia has signed eight bilateral economic agreements with Japan, Pakistan, Palestine, Chile, Australia, the European Free Trade Association, Mozambique, and South Korea. Additionally, the country completed seven agreements under the ASEAN umbrella, including the Regional Comprehensive Economic Partnership (RCEP) that Indonesia, as chair of the RCEP Trade Negotiating Committee, initiated in 2011. It has also signed seven ASEAN-specific agreements, including the ASEAN Agreement on Electronic Commerce and a trade facilitation agreement. In total, Indonesia has signed 23 trade and investment agreements.

Indonesia realizes substantial benefits from bilateral economic agreements with South Korea and Australia, showing the potential of middle-power relations.[4] However, China and the United States are Indonesia’s two largest economic partners. Indonesia needs a neutral political-economic relationship with both countries to preserve its economic benefits for at least two reasons. First, both the United States and China contribute economic influence of similar magnitude to Indonesia; and second, they both have multinational production and service networks that involve Indonesia.

THE CONTEXT OF THE ASEAN FRAMEWORK

The principle of neutrality is important not only for Indonesia but also for ASEAN. Peaceful economic relations with both the United States and China are invaluable for ASEAN and align with the group’s values of peace and neutrality. These principles are the building blocks for sustainable economic cooperation both among member states and between member and extraregional states, including the significant and mutually beneficial exchanges with the United States and China.

The increasing Sino-U.S. trade tensions since 2018 have had negative effects on consumers in the United States and on producers in China. Both sides must bear the negative impacts from this retaliatory spiral of protectionist trade policies. Yet efficient manufacturing requires global production networks, and Southeast Asian countries are parts of both U.S. and Chinese networks. The trade war has had an asymmetric spillover effect on these networks, including in Southeast Asia.[7]

While leading to trade diversion that has benefited some ASEAN members, such as Vietnam, with stronger backward than forward linkages, the trade war has negatively affected the Indonesian economy in the short run. This is because Indonesia is more integrated into regional production networks that involve China through forward linkages based on raw materials and energy demand. Because Chinese exports have been hurt by U.S. tariffs, Indonesian suppliers have been hurt as well. If the Biden administration returns to multilateral economic cooperation and reduces trade tensions with China, the negative effects of the trade war on Indonesia will be diminished. These actions would positively affect global value chains and the entire ASEAN economy, including Indonesia.

ASEAN could maintain its centrality through cooperation in the form of mega-regional agreements such as the RCEP, given that all the ASEAN member states are members of the RCEP.[8] This, however, does not apply to the Comprehensive and Progressive Agreement for Trans-Pacific Partnership (CPTPP), as only four out of ten ASEAN member states are also CPTPP members. ASEAN centrality, operating through ASEAN-led mechanisms, is necessary due to the grouping’s “doughnut power” economic shape: no country dominates, as ASEAN’s largest economies are not its richest. ASEAN centrality is an approach predicated on working to achieve economic convergence, defined as a decreasing gap between member states as measured by GDP per capita.

Indonesia’s views on the Indo-Pacific are connected to its broader international economic views of political neutrality and a market mechanism–based approach. These are motivated by Indonesia’s intention to transform its economy from one dominated by natural resource exports (forward linkages) into a part of the global manufacturing production base (backward linkages). In the context of regional economic integration, Indonesia believes that ASEAN needs economic convergence in its regional-plus frameworks. Consequently, ASEAN centrality with ASEAN-led mechanisms in which all members are involved is essential. Beyond Southeast Asia, Indonesia sees these four principles—neutrality, market-based approach, open regionalism, and economic convergence—as laying the foundation for creating mutual benefits and sustainable prosperity in the world economy.

Kiki Verico is the Associate Director of the Institute for Economic and Social Research and a Senior Lecturer in the Faculty of Economics and Business at the University of Indonesia. He is the author of The Future of the ASEAN Economic Integration (2017) as well as of several articles and op-eds. The views expressed here are solely his own and do not represent the official position of any of the institutions with which he is affiliated.

[3] The Organisation for Economic Co-operation and Development (OECD) defines the global value chains of forward linkages as the share of domestic value-added in a trade partner’s exports and final demand, and it defines backward linkages as the share of intermediate inputs that imports have in exports. For further discussion, see OECD, “Trade in Value Added,” https://www.oecd.org/sti/ind/measuring-trade-in-value-added.htm.

[9] “Soft” refers to non–legally binding mechanisms that are in line with the consultation and consensus (musyawarah dan mufakat) principle that reflects the “ASEAN way,” while “open” means that ASEAN discloses economic cooperation to nonmembers to increase export-oriented investment. Open allows ASEAN to apply the ASEAN Plus frameworks of the ASEAN umbrella. For further discussion, see Kiki Verico, The Future of the ASEAN Economic Integration (London: Palgrave Macmillan, 2017), 122–23.